What Do Leftists Celebrate?

Walter E. Williams
|
Posted: May 10, 2017 12:01 AM
Share   Tweet
The opinions expressed by columnists are their own and do not necessarily represent the views of Townhall.com. 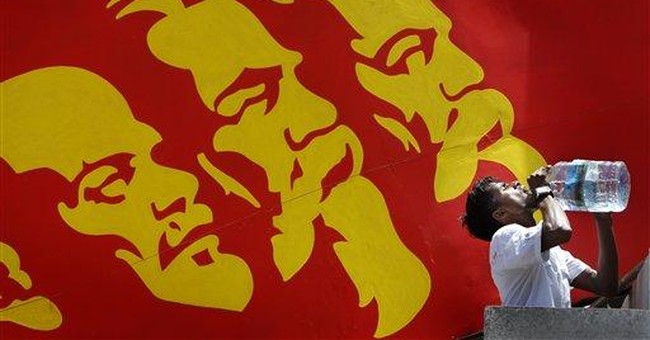 May Day celebrations were held all across the fruited plain, with leftist radicals and unionists worshipping the ideals of communism. Communism is an ideology calling for government control over our lives. It was created by Karl Marx, who -- along with his collaborator, Friedrich Engels -- wrote a pamphlet called "Manifesto of the Communist Party." In 1867, Marx wrote the first volume of "Das Kapital." The second and third volumes were published posthumously, edited by Engels. Few people who call themselves Marxists have ever even bothered to read "Das Kapital." If one did read it, he would see that people who call themselves Marxists have little in common with Marx.

For those who see Marx as their hero, there are a few historical tidbits they might find interesting. Nathaniel Weyl, himself a former communist, dug them up for his 1979 book, "Karl Marx: Racist." For example, Marx didn't think much of Mexicans. When the United States annexed California after the Mexican War, Marx sarcastically asked, "Is it a misfortune that magnificent California was seized from the lazy Mexicans who did not know what to do with it?" Engels shared Marx's contempt for Mexicans, explaining: "In America we have witnessed the conquest of Mexico and have rejoiced at it. It is to the interest of its own development that Mexico will be placed under the tutelage of the United States."

Marx had a racial vision that might be interesting to his modern-day black supporters. In a letter to Engels, in reference to his socialist political competitor Ferdinand Lassalle, Marx wrote: "It is now completely clear to me that he, as is proved by his cranial formation and his hair, descends from the Negroes who had joined Moses' exodus from Egypt, assuming that his mother or grandmother on the paternal side had not interbred with a nigger. Now this union of Judaism and Germanism with a basic Negro substance must produce a peculiar product. The obtrusiveness of the fellow is also nigger-like." Engels shared Marx's racial philosophy. In 1887, Paul Lafargue, who was Marx's son-in-law, was a candidate for a council seat in a Paris district that contained a zoo. Engels claimed that Lafargue had "one-eighth or one-twelfth nigger blood." In a letter to Lafargue's wife, Engels wrote, "Being in his quality as a nigger, a degree nearer to the rest of the animal kingdom than the rest of us, he is undoubtedly the most appropriate representative of that district."

Marx was also an anti-Semite, as seen in his essay titled "On the Jewish Question," which was published in 1844. Marx asked: "What is the worldly religion of the Jew? Huckstering. What is his worldly God? Money. ... Money is the jealous god of Israel, in face of which no other god may exist. Money degrades all the gods of man -- and turns them into commodities. ... The bill of exchange is the real god of the Jew. His god is only an illusory bill of exchange. ... The chimerical nationality of the Jew is the nationality of the merchant, of the man of money in general."

Despite the fact that in the 20th century alone communism was responsible for more than 100 million murders (http://tinyurl.com/zafgs5p), much of the support for communism and socialism is among intellectuals. The reason they do not condemn the barbarism of communism is understandable. Dr. Richard Pipes explains: "Intellectuals, by the very nature of their professions, grant enormous attention to words and ideas. And they are attracted by socialist ideas. They find that the ideas of communism are praiseworthy and attractive; that, to them, is more important than the practice of communism. Now, Nazi ideals, on the other hand, were pure barbarism; nothing could be said in favor of them." That means leftists around the world will continue to celebrate the ideas of communism.