The Cancer of Multiculturalism 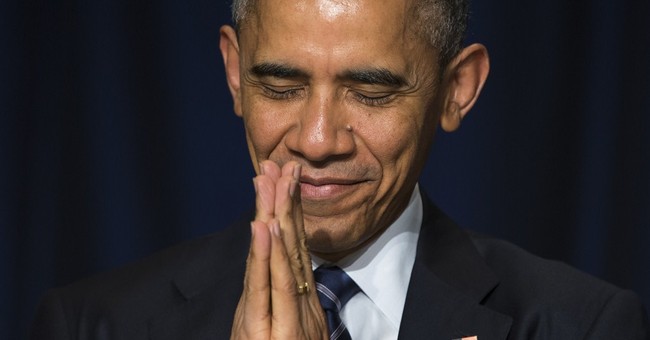 President Barack Obama surprised many at the National Prayer Breakfast when he lectured us, "Lest we get on our high horse and think this (barbarity) is unique to some other place, remember that during the Crusades and the Inquisition, people committed terrible deeds in the name of Christ." Obama went on to explain, "In our home country, slavery and Jim Crow all too often (were) justified in the name of Christ." In Obama's mind, Western outrage at Islamic barbarism should be tempered by the remembrance of what Christians did a thousand years ago in the name of Christ. Plus, that outrage should be chastened by our own history of slavery and Jim Crow.

President Obama's vision is that of a man brainwashed through an academic vision of multiculturalism, in which American exceptionalism has no place. It's a vision that has been shaped by a longtime association with people who hate our country, people such as the Rev. Jeremiah Wright, Weather Underground leader and Pentagon bomber William Ayers and Ayers' onetime fugitive wife, Bernardine Dohrn. A vision that sees a moral equivalency between what Christians did centuries ago and today's Islamic savagery is quite prevalent in academia. It's part of what's worshipped on most college campuses as diversity and multiculturalism.

College campus idiots -- and that includes faculty members and administrators -- call for the celebration of and respect for all cultures. In their eyes, it's racist Eurocentrism to think that Western values and culture are superior to others. But that's the height of stupidity. Ask your campus multiculturalist who believes in cultural equivalency: Is forcible female genital mutilation, as practiced in nearly 30 sub-Saharan African and Middle Eastern countries, a morally equivalent cultural value? Slavery is practiced in Sudan and Niger; is that a cultural equivalent? In most of the Middle East, there are numerous limits on women -- such as prohibitions on driving, employment, voting and education. Under Islamic law, in some countries, female adulterers face death by stoning, and thieves face the punishment of having their hand severed. Some multiculturalists are members of campus LGBT groups. Ask them to what extent the Muslim culture would tolerate their lifestyle.

At the very heart of multiculturalism is an attack on Christianity. Much of that attack has its roots among hypocrites in the intellectual elite. For example, Duke University sponsored Muslim calls to prayer in the name of promoting "religious pluralism," until external pressures forced it to cancel the practice. Earlier, Duke administrators removed Chick-fil-A as a campus vendor because of CEO Dan Cathy's comments regarding his religious opposition to homosexual marriage. So much for religious pluralism, tolerance and free speech.

Some public school boards have attempted to ban songs containing references to Santa Claus, Jesus or religious Christmas symbols. One school district banned a teacher from using excerpts from historical documents in his classroom because they contained references to God and Christianity. The documents in question were the Declaration of Independence and "The Rights of the Colonists," by Samuel Adams.

Western values are by no means secure. They're under ruthless attack by the academic elite on college campuses across America. These people want to replace personal liberty with government control; they want to replace equality with entitlement; they want to halt progress in order to worship Mother Earth. As such, they pose a far greater threat to our way of life than any Islamic terrorist or group. Visions of multiculturalism and diversity are a cancer on our society. We stupidly fund them with our tax dollars and generous charitable donations.

Islamists and leftists attack not only Christianity but also free market capitalism. They do so because Christian nations, which have a great measure of economic liberty, have been at the forefront of the struggle for personal liberty and private property rights for centuries. Personal liberty and private property are anathemas to people who want to control our lives. That is part and parcel of the multicultural and diversity movements infecting the Western world.

Massive Survey Finds Americans' Views on Gender Are Shifting, But Not the Way Leftists Want
Townhall
Cassidy Hutchinson deemed as ‘reliable’ over her memory about ... ketchup?
Twitchy
More Implosion of Hutchinson's J6 Claims as Adam Schiff Steps in It Big Time on CNN
Redstate
Another J6 Trump 'Bombshell' Outed as a Hoax!
PJ Media