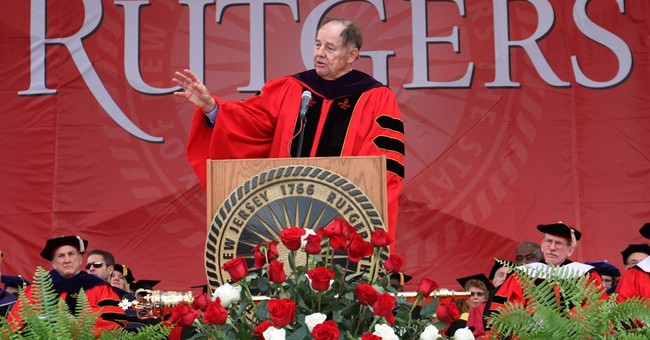 From the Nazis to the Stalinists, tyrants have always started out supporting free speech, and why is easy to understand. Speech is vital for the realization of their goals of command, control and confiscation. Basic to their agenda are the tools of indoctrination, propagandizing, proselytization. Once they gain power, as leftists have at many universities, free speech becomes a liability and must be suppressed. This is increasingly the case on university campuses.

Back in 1964, it was Mario Savio, a campus leftist, who led the free speech movement at the Berkeley campus of the University of California, a movement that played a vital role in placing American universities center stage in the flow of political ideas, no matter how controversial, unpatriotic and vulgar. The free speech movement gave birth to the hippie movement of the '60s and '70s. The longhair, unkempt hippies of that era have grown up and now often find themselves being college professors, deans, provosts and presidents. Their intolerance of free speech and other ideas has become policy and practice on many college campuses.

Daniel Henninger, deputy editor of The Wall Street Journal's editorial page, updates us on the campus attack on free speech and different ideas in his article titled "Obama Unleashes the Left: How the government created a federal hunting license for the far left" (http://tinyurl.com/mp5x428).

Former Secretary of State Condoleezza Rice, one of the nation's most accomplished women, graciously withdrew as Rutgers University's commencement speaker after two months of campus protests about her role in the Iraq War. Some students and professors said, "War criminals shouldn't be honored." One wonders whether these students would similarly protest Hillary Clinton, who, as senator, voted for the invasion of Iraq.

Brandeis University officials were intimidated into rescinding their invitation to Somali writer and American Enterprise Institute scholar Ayaan Hirsi Ali, whose criticisms of radical Islam were said to have violated the school's "core values." Brandeis decided that allowing her to speak would be hurtful to Muslim students. I take it that Brandeis students and officials would see criticism of deadly Islamist terrorist gang Boko Haram's kidnapping of nearly 300 Nigerian girls, some of whom have been sold off as brides, as unacceptable and violative of the university's core values.

Azusa Pacific University, a private Christian university, canceled a planned address by distinguished libertarian scholar Charles Murray out of fear that his lecture might upset "faculty and students of color." In response to the cancellation, Murray wrote an open letter to the students, which in part read: "The task of the scholar is to present a case for his or her position based on evidence and logic. Another task of the scholar is to do so in a way that invites everybody into the discussion rather than demonize those who disagree. Try to find anything under my name that is not written in that spirit. Try to find even a paragraph that is written in anger, takes a cheap shot, or attacks women, African Americans, Latinos, Asians, or anyone else." Unfortunately, such a scholarly vision is greeted with hostility at some universities.

Earlier this year, faculty and students held a meeting at Vassar College to discuss a particularly bitter internal battle over the school's movement to boycott Israel. Before the meeting, an English professor announced the dialogue would "not be guided by cardboard notions of civility." That professor might share the vision of Adolf Hitler's brown-shirted thugs of the paramilitary wing of the Nazi party in their effort to crush dissent.

Western values of liberty are under ruthless attack by the academic elite on college campuses across America. These people want to replace personal liberty with government control; they want to replace equality with entitlement. As such, they pose a far greater threat to our way of life than any terrorist organization or rogue nation. Multiculturalism and diversity are a cancer on our society. Ironically, we not only are timid in response but feed those ideas with our tax dollars and charitable donations.