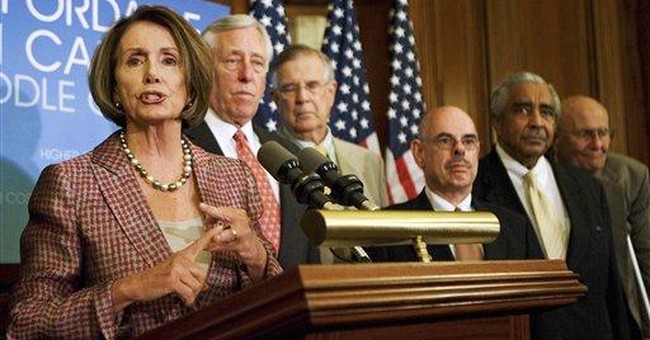 Most people whom we elect to Congress are either ignorant of, have contempt for or are just plain stupid about the United States Constitution. You say: "Whoa, Williams, you're really out of line! You'd better explain." Let's look at it.

Rep. Phil Hare, D-Ill., responding to a question during a town hall meeting, said he's "not worried about the Constitution." That was in response to a question about the constitutionality of Obamacare. He told his constituents that the Constitution guaranteed each of us "life, liberty and the pursuit of happiness." Of course, our Constitution guarantees no such thing. The expression "life, liberty and the pursuit of happiness" is found in our Declaration of Independence.

During a debate, Rep. Jim McGovern, D-Mass., gave his opinion about the U.S. Supreme Court's ruling in Citizens United v. Federal Election Commission, concluding that "the Constitution is wrong." Not to be outdone, at his town hall meeting, Rep. Pete Stark, D-Calif., responded to a constituent's question about Obamacare by saying, "There are very few constitutional limits that would prevent the federal government from (making) rules that can affect your private life." Adding, "Yes, the federal government can do most anything in this country." The questioner responded, "People like you, sir, are destroying this nation." Her comment won shouts of approval from the audience.

Last year, a CNS reporter asked, "Madam Speaker, where specifically does the Constitution grant Congress the authority to enact an individual health insurance mandate?" Speaker Pelosi responded: "Are you serious? Are you serious?" She shares the vision of her fellow Californian Stark that Washington can do most anything.

Actually, Article I, Section I reads, "All legislative Powers herein granted shall be vested in a Congress of the United States, which shall consist of a Senate and House of Representatives." LoBiondo was later asked whether he knew the five rights guaranteed by the First Amendment. Fearing further revelation of his ignorance, he replied, "I can't articulate that."

Here, in part, is the oath of office that each congressman takes: "I do solemnly swear (or affirm) that I will support and defend the Constitution of the United States against all enemies, foreign and domestic; that I will bear true faith and allegiance to the same ... ." Here's my question to you: If one takes an oath to uphold and defend, and bear true faith and allegiance to the Constitution, at the minimum, shouldn't he know what he's supposed to uphold, defend and be faithful to?

If congressmen, judges, the president and other government officials were merely ignorant of our Constitution, there'd be hope -- ignorance is curable through education. These people in Washington see themselves as our betters and rulers. They have contempt for the limits our Constitution places on the federal government envisioned by James Madison, the father of our Constitution, who explained in the Federalist Paper 45: "The powers delegated by the proposed Constitution to the federal government are few and defined. Those which are to remain in the State governments are numerous and indefinite. The former will be exercised principally on external objects, as war, peace, negotiation, and foreign commerce. ... The powers reserved to the several States will extend to all the objects which in the ordinary course of affairs, concern the lives and liberties, and properties of the people, and the internal order, improvement and prosperity of the State."