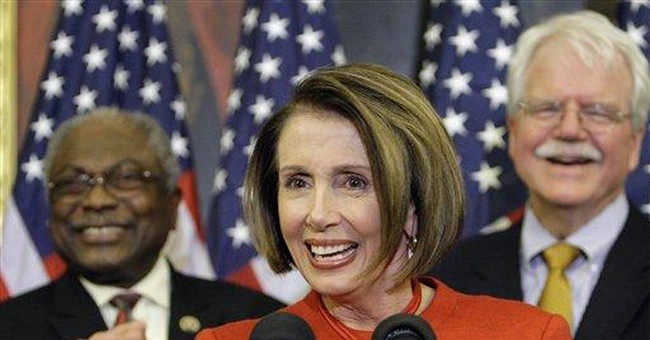 At Speaker Nancy Pelosi's Oct. 29th press conference, a CNS News reporter asked, "Madam Speaker, where specifically does the Constitution grant Congress the authority to enact an individual health insurance mandate?" Speaker Pelosi responded, "Are you serious? Are you serious?" The reporter said, "Yes, yes, I am." Not responding further, Pelosi shook her head and took a question from another reporter. Later on, Pelosi's press spokesman Nadeam Elshami told CNSNews.com about its question regarding constitutional authority mandating that individual Americans buy health insurance. "You can put this on the record. That is not a serious question. That is not a serious question."

Suppose Congress was debating a mandate outlawing tea-party-type protests and other large gatherings criticizing Congress. A news reporter asks Nancy Pelosi where specifically does the Constitution grant Congress the authority to outlaw peaceable assembly. How would you feel if she answered, "Are you serious? Are you serious?" and ignored the question. And what if, later on, someone from her office sent you a press release, as was sent to CNS News, saying that Congress has "broad power to regulate activities that have an effect on interstate commerce," pointing out that demonstrations cause traffic jams and therefore interferes with interstate commerce?

Speaker Pelosi's constitutional contempt, perhaps ignorance, is representative of the majority of members of both the House and the Senate. Their comfort in that ignorance and constitutional contempt, and how readily they articulate it, should be worrisome for every single American. It's not a matter of whether you are for or against Congress' health care proposals. It's not a matter of whether you're liberal or conservative, black or white, male or female, Democrat or Republican or member of any other group. It's a matter of whether we are going to remain a relatively free people or permit the insidious encroachment on our liberties to continue.

Where in the U.S. Constitution does it authorize Congress to force Americans to buy health insurance? If Congress gets away with forcing us to buy health insurance, down the line, what else will they force us to buy; or do you naively think they will stop with health insurance? We shouldn't think that the cure to Congress' unconstitutional heavy-handedness will end if we only elect Republicans. Republicans have demonstrated nearly as much constitutional contempt as have Democrats. The major difference is the significant escalation of that contempt under today's Democratically controlled Congress and White House with the massive increase in spending, their proposed legislation and the appointment of tyrannical czars to control our lives. It's a safe bet that if and when Republicans take over the Congress and White House, they will not give up the massive increase in control over our lives won by the Democrats.

In each new session of Congress since 1995, John Shadegg, R-Ariz.,) has introduced the Enumerated Powers Act, a measure "To require Congress to specify the source of authority under the United States Constitution for the enactment of laws, and for other purposes." The highest number of co-sponsors it has ever had in the House of Representatives is 54 and it has never had co-sponsors in the Senate until this year, when 22 senators signed up. The fact that less than 15 percent of the Congress supports such a measure demonstrates the kind of contempt our elected representatives have for the rules of the game -- our Constitution.

If you asked the questions: Which way is our nation heading, tiny steps at a time? Are we headed toward more liberty, or are we headed toward greater government control over our lives? I think the answer is unambiguously the latter -- more government control over our lives. Are there any signs on the horizon that the direction is going to change? If we don't see any, we should not be surprised. After all, mankind's standard fare throughout his history, and in most places today, is arbitrary control and abuse by government.