The Media Discrimination Against Cold Weather

Vijay Jayaraj
|
Posted: Sep 13, 2019 12:01 AM
Share   Tweet
The opinions expressed by columnists are their own and do not necessarily represent the views of Townhall.com. 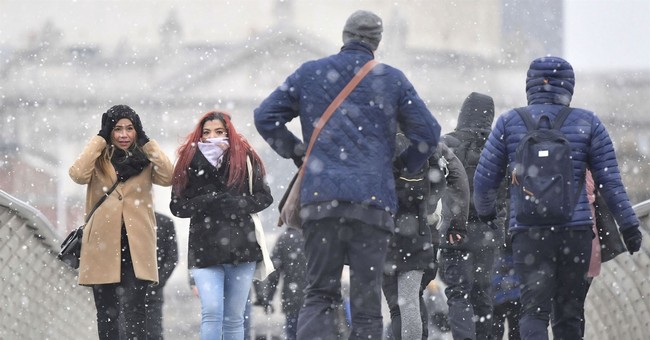 Western Europe and parts of North America experience above average temperatures regularly. Thanks to the mainstream media, every increase in temperature is duly noted and reported to the masses, often with a fear-mongering headline like “Climate Change Blamed for Heatwave.”

However, the same media intentionally choose not to report the regular occurrence of cold weather events and below average temperatures.

Earlier this month, even as the media spoke about a heatwave in Western Europe and Greenland, much of Russia and regions beyond were engulfed in a cold blast from the Arctic.

At the same time, Australia was experiencing severe winter conditions because of a cold blast from Antarctica. Many towns were experiencing snow for the first time after decades. However, this historically significant cold is rarely portrayed as out of the ordinary.

Rather, they are just explained away as regular winter events—something that poses no challenge to the dominant warming hypothesis—and do not make it to the headlines of the popular mainstream media.

This bias in climate reporting does not do justice to the climate reality.

Furthermore, the media blame major hot weather events on climate and seldom explain the actual reasons for their occurrence.

The heatwave in Europe was a weather event highly influenced by a wavy jet stream, producing alternating weather conditions. The jet stream is the reason why the same places experience warm and cold conditions in the space of weeks. Western Europe experienced both heatwaves from North Africa and cold blasts from the Arctic in July. It is scheduled to experience cold and wet conditions in August too, with heatwaves expected to return at the end of the month.

The incorrect reporting and cherry picking in the media are not limited to this summer’s wavy jet stream. The media have rarely reported the great winter of 2017–18, and they have largely ignored hundreds of record-breaking cold events since then.

Why do the media deliberately under-report cold weather events and exaggerate even a small warming event?

The answer is obvious: the propaganda surrounding climate doomsday cannot be sustained without a manipulation of real-world information, i.e., deliberately making the public to believe that there are increasing numbers of warm events and fewer cold weather events.

This tactic is becoming increasingly common as the natural climate system is not showing any signs of extreme warming, posing a serious challenge to climate alarmism. In the last 20 years, the global temperature levels have shown no significant increase, a phenomenon sometimes called the “global warming hiatus.”

Additionally, the increased access to communication media has resulted in easy reporting of extreme weather events. Many of the cold weather events were difficult to keep away from the public spotlight, and the climate fraternity had to invent new explanations to sustain their warming hypothesis.

They eventually did come up with outlandish explanations such as the claim that excess snowing is a sign of global warming. As absurd as it sounds, it is now a mainstream hypothesis in the climate alarmist circles.

Common sense tells us that as snow can occur only with freezing conditions and sufficient moisture in the air, for a particular city to experience that at temperatures above freezing is impossible.

The 2017–18 winter caused historic cold in many parts of the world and even record snow in some places like New York City. The extreme cold and snow were blamed on climate change, more specifically anthropogenic global warming (AGW).

The current wavy jet stream pattern in the Northern Hemisphere (which brought unusually cold summer weather to Europe) is also blamed on AGW. Also blamed on AGW, are the hot El Niño weather events like the one which the world experienced in 2016.

By blaming every hot weather event on AGW, and by ignoring the cold weather events or dismissing them as mere weather patterns, the media and the climate fraternity intentionally mislead the public.

The repercussions will be severe when the world finds itself less prepared to tackle challenges posed by actual climate change—with an equal probability of both hot and cold weather events—as opposed to the current strategy that primarily revolves around AGW and the unproven claims about future climate states.