Vijay Jayaraj
|
Posted: Sep 03, 2019 12:01 AM
Share   Tweet
The opinions expressed by columnists are their own and do not necessarily represent the views of Townhall.com. 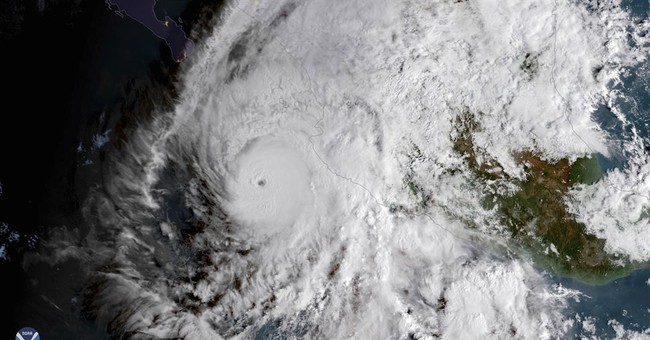 As I write at 11 a.m. Eastern Time Monday, Hurricane Dorian, with sustained winds of 155 mph—barely below Category 5—is pounding the Bahamas and moving very slowly westward, forecast to turn north later today.

After crawling slowly up the Florida and Georgia coasts Tuesday through Wednesday, Dorian is forecast to turn northeast Thursday morning and continue its crawl along the coasts of South and North Carolina.

By Friday morning the eye could be east of North Carolina’s outer banks, and there is some chance that the far western edge of Dorian’s winds and rains could affect Virginia, Delaware, and Maryland later Friday and into Saturday, though the storm seems more likely to stay well offshore.

I can only imagine the plight of friends I met in Florida in 2016, and countless others along its coast. State and federal officials have arranged rescue operations, and people are being made aware of safety procedures.

Not surprisingly, climate-change alarmists are seizing the opportunity to promote unfounded fears.

Writing in Forbes, Laura Tenenbaum declared, “global warming causes more intense hurricanes” and suggested that more are on the way. Grist quipped, “‘Another hurricane?’ How climate disasters can give us compassion fatigue,” and asserted that “the scientific consensus is that climate change will contribute to more frequent extreme weather events.” Grist blamed President Donald Trump for being complicit.

This tactic—seizing the moment to politicize a hurricane and push the climate scare—is not new. The Washington Post did the same during Hurricane Florence’s landfall last year.

Is Dorian a result of “climate change”? Well, yes, insofar as every hurricane forms due to changes in climatic conditions that bring favorable conditions for a hurricane.

But that, of course, isn’t what climate alarmists have in mind by “climate change.” They mean global warming over the past 50 years or so driven to dangerous levels by human emissions of carbon dioxide. This, they claim, is causing more extreme weather events like the recent wildfires in the Amazon and Category 5 hurricanes like Dorian.

But one need not be a scientist to expose the falsehood of that claim. All one has to do is look up the historic frequency and strength of hurricanes since records began. The data reveal the truth—and here they are.

No Increase in Hurricane Frequency

The National Oceanic and Atmospheric Administration’s “U.S. Hurricane Strikes by Decade” data, reaching back to 1851, can be accessed here. They show that there has been a 50 percent reduction in the number of major hurricanes making landfall in the United States since the 1930s. For the entire period, there is a slight downward trend in frequency, but the decline since the 1930s is remarkable.

So, if anything, hurricanes have become less frequent, not more, during the period of allegedly manmade global warming.

No Increase in Hurricane Strength

Although damage done by hurricanes has risen, the increase is entirely because more people and property are in their paths, not because there are more, or stronger, hurricanes. Hurricane intensity shows no sign of increase in the past 90 years. In fact, there is a slight decrease between 1930 and 2018.

So the hard data reveal that hurricanes are not increasing in either frequency or intensity. Any claim of scientific consensus otherwise is simply false.

The mainstream media have been promoting the myth of “scientific consensus on extreme weather events.” Scientists themselves say there is no such consensus.

The United Nations Intergovernmental Panel on Climate Change’s (IPCC) special climate report in 2018 finds little to no evidence for the hypothesis that global warming caused extreme weather events to increase.

Instead, it says “there is only low confidence regarding changes in global tropical cyclone numbers under global warming over the last four decades.” Even more shocking, it states,“Numerous studies towards and beyond AR5 have reported a decreasing trend in the global number of tropical cyclones and/or the globally accumulated cyclonic energy.”

So instead of creating climate fears and politicizing Hurricane Dorian, the media should stick to warning people of risks and informing them about safety procedures and rescue operations.