Vijay Jayaraj
|
Posted: May 24, 2019 12:01 AM
Share   Tweet
The opinions expressed by columnists are their own and do not necessarily represent the views of Townhall.com. 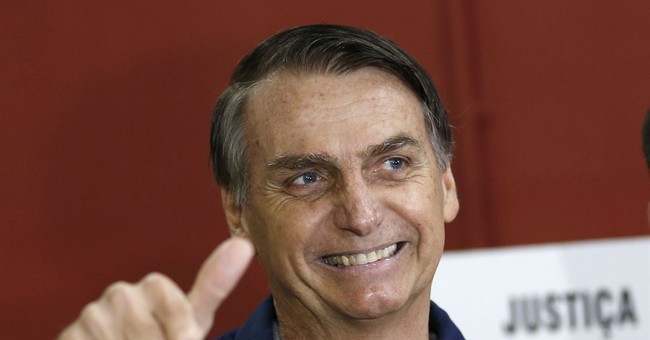 The 25th Conference of Parties to the United Nations’ Framework Convention on Climate Change was scheduled to take place in Brazil this year. Not anymore. Brazil pulled out.

Brazil once offered to host this year’s Latin America and Caribbean Climate Week. It just withdrew the offer.

And recently President Jair Bolsonaro fired Alfredo Sirkis from his position at the top of the Brazil Climate Change Forum, which Bolsonaro’s predecessor Michel Temer started to flesh out Brazil’s commitment under the Paris climate treaty.

What gives? Is Bolsonaro living up to his reputation as the Brazilian Trump, earned when in campaign for the presidency he said he would pull Brazil out of the treaty?

And can there possibly be any justification for what Brazil is doing? Isn’t climate change an imminent threat to mankind? Does Brazil’s skeptical stance risk the safety of the rest of humanity?

One thing’s for sure: so far Bolsonaro is sticking to his election mandate to put economic development ahead of policies of climate change. Brazil’s move erects a big hurdle for the race against climate change. Is it defensible?

Southern South America’s greatest warming occurred not during the past hundred years, driven by carbon dioxide emissions from fossil fuels, but from 800 to 900 A.D. and, even more so, from 1400 to 1500.

Ricardo Villalba, of the University of Colorado at Boulder, wrote in his paper “Tree Ring and Glacial Evidence for the Medieval Warm Epoch and the Little Ice Age in Southern South America” that “The years A.D. 1468–69 represent, in both temperature and precipitation reconstructions from tree rings, the largest departures during the last 1000 yr.”

In other words, at least major parts of South America, possibly the entire continent, experienced their warmest temperatures well before industrialization or major greenhouse gas emissions from human sources.

So temperatures not only rose steeply but also declined steeply with no human intervention.

More recently (2018), Collins et al studied the centennial-scale South East Pacific (off the coast of South America) sea surface temperature (SST) over the past 2300 years and found a similar temperature pattern to that found on the land.

Warmer and cooler SSTs coincided with the Medieval Warm Period and the Little Ice Age respectively. And current SSTs are cooler than those of the past 2300 years.

Collins et al also found that the SST along the Chilean coast had very warm and very cold phases before any industrialization.

Considering such strong evidence for the lack of dangerous warming in the Southern Hemisphere, or at least in South America, Brazil’s pullout is justifiable.

In fact, Brazil’s action is further justified by the lack of significant warming globally during the past 19 years and the scientific forecasts of a cooling period triggered by very low solar activity in the coming two decades.

Brazil is still a developing country. It cannot bypass fossil fuels in its quest to achieve economic progress—fuels that were indispensable to the economic development of every developed country in the world.

Even without the climate records, it would make no sense for Brazil to try to meet its domestic energy demands by sacrificing fossil fuels on the altar of climate change.

The same is true for every other developing country in the world.

Spencer Brown
The FBI Lied to a Judge So They Could Bust Open Thousands of Safety Deposit Boxes
Katie Pavlich
Wave Watch: Why a Blockbuster New WaPo/ABC Poll is a Midterm Nightmare for Democrats
Guy Benson
Schlichter: Leave Our Kids Alone