Vijay Jayaraj
|
Posted: Mar 28, 2019 12:01 AM
Share   Tweet
The opinions expressed by columnists are their own and do not necessarily represent the views of Townhall.com. 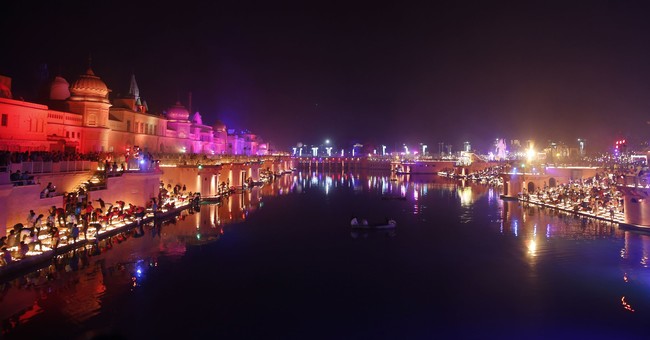 Amidst the madness surrounding the Green New Deal and the push for renewable energy across the globe, India and United States have quietly made landmark deals in energy cooperation.

The U.S. signed a deal with India for American companies to build 6 nuclear power plants in the coastal state of Andhra Pradesh. These will boost India’s ability to meet its growing domestic energy demands.

The deal is of foremost importance to India’s energy aspirations. Following the example set by the U.S., India has consistently focused on expanding its energy sector through newer and more efficient energy resources like natural gas and nuclear.

Despite the clarion call from the United Nations to embrace renewables, India (like its Asian neighbor China) has been following a double strategy.

On the one hand, to appease the U.N. it embraces renewables, but on a relatively small scale. In 2016 renewables supplied only 12.8% of total energy generation, of which only 3.1% came from wind and solar, while 8.8% came from hydro.

On the other hand, to meet its real needs, India harnesses other energy sources like coal, nuclear, and natural gas. Nonrenewables supplied 87.2% of India’s total energy generation in 2016.

Moreover, the signing of this new agreement between India and the U.S. comes on the heels of the near-war in the Indian subcontinent in early March. India and Pakistan, both nuclear states, engaged in a week-long exchange of fire near their borders that could have erupted into full-blown war.

This may seem very unsettling to many and even a possible deterrent to the new nuclear deal. But geopolitical experts and global leaders have always recognized India as a “reluctant nuclear state,” not eager to use nuclear weapons and committed to a “no first use policy.”

This meant that the U.S. had no problems signing the new deal, and with good reason.

Reliable and Affordable Energy, and a New Friend

India is an energy-hungry, rapidly developing nation where the energy sector is the backbone of the economy. Any disruptions in the energy sector will adversely impact the country’s efforts to alleviate poverty and various associated daily deaths.

BP’s Energy Outlook report suggests that India’s energy consumption will rise by 129 percent between 2015 and 2035.

Recently, India harnessed its coal resources to achieve an energy surplus, a feat the nation never achieved before. Coal contributes nearly 75 percent of India’s electricity, but it is not sufficient to meet the existing and future energy demands.

To back up the fast-growing coal sector, the country needs strong secondary sources of energy. The most obvious reason for India’s strong inclination towards nuclear power is the highly stable, resource-efficient, high-output, clean, safe, and reliable energy that can be generated from it.

In the past, Russia has been India’s civil nuclear energy partner. Russia’s pressurized water reactors (PWR) are currently being used in the Kudankulam nuclear plant, the highest-capacity nuclear plant in India with a forecasted capacity of 4000 MW.

India’s only Prototype Fast Breeder Reactor (PFBR) at Kalapakkam, produces less radioactive waste and more efficient energy generation capacity. It is situated not far from my home and will attain criticality in 2019. The Beloyarsk nuclear plant in Russia is the only other commercially operating PFBR in the world.

With this new deal, the U.S. hopes to become India’s new civil nuclear energy partner. It also reflects the country’s increasing military and economic ties with India in the last two decades.

And it is not just nuclear energy.

The two countries already have an active agreement for the exploration and extraction of offshore natural gas reserves in the Indian Ocean. Despite resistance from the anti-fracking groups, India is confident of utilizing its newly discovered natural gas reserves.

India will not compromise on its natural gas ambitions, especially after witnessing the huge success story in the American energy sector that can be exclusively attributed to the boom of shale gas.

Escape from the Renewable Madness, and Coal Lessons from the World

Though India is viewed as an emerging renewable market and hailed as a renewable champion at international conferences, the ground reality is far different.

Not long ago, India’s Chief Economic Adviser openly acknowledged the country’s frustration with the constant anti-fossil fuel pressure applied by the UN.

He termed the growing pressure form the UN and developed countries as “Carbon Imperialism,” reflecting the mandatory anti-coal policies forced upon the country in the name of fighting global warming.

The country’s leadership is well aware of the limitations of renewables. In fact, India has been wrestling with its renewable energy sources for some time now.

The intermittent and unreliable nature of renewable energy has been a big problem for both energy companies and consumers. With renewables in the mix, only backup by stable energy sources like coal, gas, and nuclear can guarantee a seamless flow of electricity. The larger renewables’ role becomes, the more difficult, and expensive, it becomes to guarantee that seamless flow.

The inadequacy and inefficiency of renewable energy is well documented across the globe.

It was recently observed in Australia, where a reliance on renewables led to a shortage of electricity in South Australia, leaving thousands without power. The Australian state of New South Wales averted a similar situation by turning to coal.

India’s giant neighbor China also experienced the bitter consequence of reducing dependency on fossil fuels. People in some parts of the country were left freezing due to bans or limits on the use of coal.

In Europe, Germany is a classic example of an energy system collapse. Despite investing $222 billion in renewable energy subsidies over 18 years,Germany’s carbon dioxide emissions have remained the same as in the year 2000.

There are countless other examples of renewables’ inferior ability to provide consistent, high quality, affordable, reliable electricity. In fact, I am able to write this article because electricity generated from large coal plants in my state (Tamil Nadu) provides uninterrupted electricity. Tamil Nadu has embarked on a coal-import spree to meet increasing electricity demand, and citizens here are hopeful that they’ll have a future without blackouts like Australia’s.

Instead of bowing to the pressure of anti-fossil and anti-nuclear political establishments, India has made the right decision to stick with fossil fuels while increasing its use of nuclear power. The new deals with U.S. on nuclear and natural gas will only boost the country’s already powerful energy industry.