Untenable Alliance Is No Turkish Delight

Victor Davis Hanson
|
Posted: Oct 24, 2019 12:01 AM
Share   Tweet
The opinions expressed by columnists are their own and do not necessarily represent the views of Townhall.com. 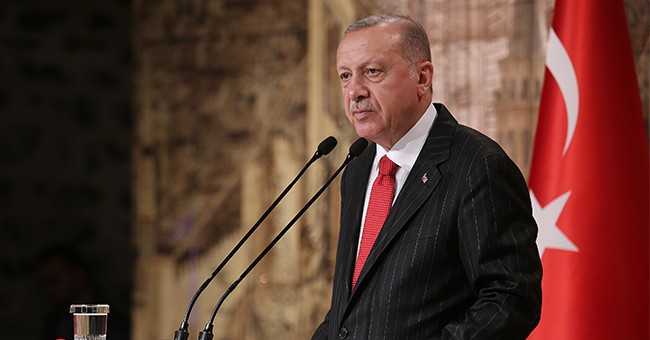 There are about 5,000 members of the U.S. military, mostly airmen, stationed at the huge, strategically located air base in Incirlik, Turkey, northwest of the Syrian border.

The American forces at Incirlik are also the custodians of about 50 B61 nuclear bombs. Data on these weapons is classified, but at their maximum yield each is 10 times more powerful than the bomb dropped on Hiroshima, according to Stars and Stripes.

It's a "Dr. Strangelove" scenario: No one quite knows how the American contingent could manage to secretly remove the deadly nukes from their concrete vaults, bring them out to the tarmac, load them on planes and fly them out safely over Turkish objections.

Turkey in the past has threatened to go nuclear itself should the U.S. ever dare to transfer the lethal arsenal. Apparently, Turkey's theory is that possession of bombs in one's territory is 9/10ths of the law of nuclear weapons ownership.

In the aftermath of the Turkish invasion of Cyprus in 1974, which led to a U.S. arms embargo, Turkey shut down all U.S. operations at Incirlik. American forces were expelled for three years -- until Washington caved and resumed arms supplies.

In 2016, Turkey cut off power to the base and forbid U.S. flights, fearing that the dissident Turkish generals of a failed coup attempt might use the American facility as a sanctuary.

Under Islamist strongman Recep Tayyip Erdogan, Turkey has become NATO's only non-democratic nation. It's also NATO's only Muslim-majority member. Erdogan has been trying to re-create Turkey as a new Ottoman imperial power. He feels no allegiance to Western-style democracy.

During the Obama administration, Erdogan snubbed the obsequious American attempts to promote Turkey as the cornerstone of America's Middle East policy. President Trump should remember that and perhaps reconsider his own sometimes appeasing outreach to Erdogan.

Turkey opposes, if not detests, almost every American ally in the region, and befriends almost every U.S. enemy.

It despises Israel, aids its enemies and hopes for its dissolution. Turkey is currently attacking the U.S.-allied Kurds in Syria. It works against the pro-American Sisi regime in Egypt. Turkish violations of Greek airspace in the Aegean are a common occurrence, as are aggressive simulated attacks on Greek aircraft.

Turkey has frightened and alienated most NATO allies. The European Union has limited arms sales to Turkey. Germany has pulled its small forces out of the country. Recently, Turkish forces "accidentally" shelled a U.S. Special Forces peacekeeping outpost on the Turkish-Syrian border.

Russia sold Turkey a $2 billion, state-of-the-art S-400 anti-aircraft missile system designed to shoot down the latest NATO aircraft. Yet the U.S. is contracted to sell Turkey F-35 fighter aircraft, the cornerstone of the next-generation air defense of America and NATO. Given that some of the plane's assemblage was outsourced to Turkish companies, it's conceivable that on-site Russian technicians could build into the S-400 system ways to down F-35s.

Why, then, is the U.S. still an ally of this anti-American rogue nation? There are a number of scary reasons.

-- The U.S. military has not quite figured out how either to stay in or leave Incirlik in a now-hostile Turkey.

-- Washington knows that fighters at the valuable Incirlik base can reach any strategic conflict in the Middle East.

-- American diplomats naively hope that democracy will return to Turkey and that Erdogan is a temporary nuisance who does not reflect a rising Islamist constituency in the Turkish heartland.

-- America believes a bad ally is better than a bitter enemy. It fears that a hostile Turkey could start and win wars against our vulnerable regional friends and create a formidable nuclear alliance with Russia, China or Iran.

-- The West in general is blackmailed by Turkey, a gateway to the Middle East that has threatened to unleash a flood of millions of migrants onto European soil.

-- NATO in general is underfunded and undermanned. In contrast, NATO member Turkey has the second-largest military in the alliance at nearly 650,000 troops. Europe and the U.S. either believe such a force helps maintain credible NATO deterrence or are terrified it will be put into the service of others.

-- The U.S. fears that fighting against, or failing to aid, a NATO partner might unravel the entire alliance. Turkey has invoked Article IV of the treaty, requiring crisis consultation when a NATO ally claims it is threatened, three times in its regional disputes.

Not since the U.S. came to the aid of Joseph Stalin's USSR in World War II has America so disliked and so feared a valuable but utterly untenable ally.