Midterm Optics Are Bad for Progressives

Victor Davis Hanson
|
Posted: Oct 25, 2018 12:01 AM
Share   Tweet
The opinions expressed by columnists are their own and do not necessarily represent the views of Townhall.com. 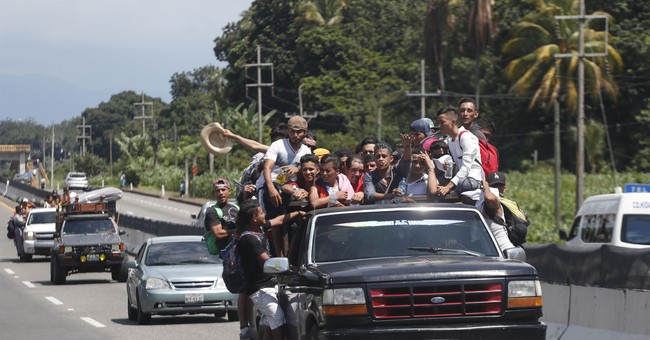 For progressives, the looming midterm elections apparently should not hinge on a booming economy, a near-record-low unemployment rate, a strong stock market and unprecedented energy production. Instead, progressives hope that race and gender questions overshadow pocketbook issues.

The media is fixated on another caravan of foreign nationals flowing toward the United States from Central America. More than 5,000 mostly Honduran migrants say they will cross through Mexico. Then they plan to crash the American border, enter the U.S. illegally, claim refugee status and demand asylum. Once inside the United States, the newcomers will count on a variety of ways to avoid deportation.

Open-borders advocates and progressives assume that if border-security officials are forced to detain the intruders and separate parents who broke the law from their children, it will make President Trump and Republican candidates appear cold-hearted and callous.

Earlier this year, a similar border melodrama became sensationalized in the media and almost certainly dropped Trump's approval ratings. But this time around, the optics may be different.

The new caravan appears strangely well organized. The marchers, many of them young men, do not appear destitute. They do not seem to fit the profile of desperate refugees whose lives were in immediate danger in their homeland.

For many Americans, the would-be refugees may seem presumptuous in assuming that they have the right to barge into someone else's country. Most Americans realize that if an organized caravan of foreigners can simply announce in advance plans to crash into the U.S. illegally, then the concepts of a border, citizenship, sovereignty or even a country itself no longer exist.

A number of other events on the eve of the midterm elections also may have the opposite of the intended effect on voters.

The Supreme Court nomination hearings for Brett Kavanaugh ended up as scripted melodrama. Protesters disrupted the Senate on cue. They screamed from the gallery. Democratic senators staged a walkout. They filibustered and interrupted the proceedings.

Their collective aim was to show America that male Republican senators were insensitive to the feelings and charges of Christine Blasey Ford, and therefore callous and sexist.

Ford had alleged that Kavanaugh 36 years earlier had sexually assaulted her at a party when they were both teenagers. But she produced no corroborating testimony, physical evidence or witnesses. Many of her assertions were contested by other people.

Many Americans finally concluded that there was no reason to deny Kavanaugh's nomination to the court. To find Kavanaugh guilty of Ford's charges, Americans were asked to suspend the very ideas of due process and Western jurisprudence.

The furious demonstrations that followed Kavanaugh's confirmation only made the optics worse.

Republican senators were confronted at their offices and on elevators. Protesters broke through police cordons and beat and scratched at the Supreme Court doors, apparently in vain efforts to break in and disrupt the swearing-in ceremonies.

Did the ongoing chaos work to change public opinion in their direction?

Most Americans do not want frenzied shriekers scratching at doors on Capitol Hill. They are turned off by shouters popping up in Senate galleries. Few are comfortable with efforts to bully or intimidate senators rather than to persuade them.

In yet another misreading of the public, Sen. Elizabeth Warren produced the results of a DNA test to prove she had properly claimed advantageous minority status on the basis of her alleged Native American family history.

But the test only confirmed that Warren might be 1 percent (or less) Native American, and probably not from a tribe in the continental U.S.

If Warren's video emphasizing her DNA claims was intended to be persuasive, it sadly ended up confirming her farce. Most Americans could claim a similarly minuscule bloodline but would not do so to game the system for careerist advantage.

On the eve of the midterms, progressives believe that these public spectacles showcasing feminist, immigrant and identity issues trump the booming economy and might galvanize independents and fence-sitters to vote for liberal candidates.

Yet the caravan, the Kavanaugh hearings and the Warren fiasco remind voters of the very opposite of what was intended.

Every country requires a border and the rule of law. Due process cannot so easily be thrown out in a moment. There can be no Senate without safety and calm inside its halls. Powerful, privileged Washington officials should be the last to game a system designed to help the underprivileged.