Victor Davis Hanson
|
Posted: Dec 28, 2017 12:01 AM
Share   Tweet
The opinions expressed by columnists are their own and do not necessarily represent the views of Townhall.com. 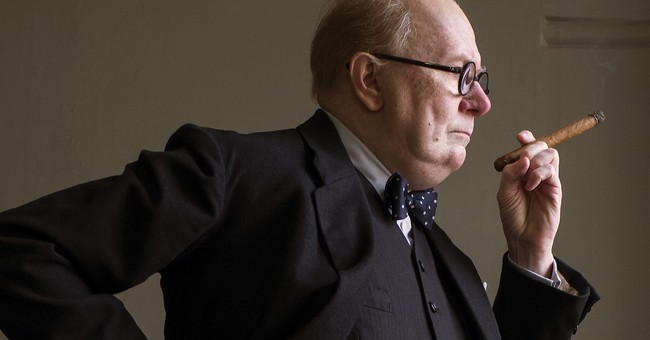 The new film "Darkest Hour" offers the diplomatic side to the recent action movie "Dunkirk."

The story unfolds with the drama of British Prime Minister Winston Churchill assuming power during the Nazi invasion of France in May 1940. Churchill's predecessor, the sickly Neville Chamberlain, had lost confidence of the English people and the British government. His appeasement of Adolf Hitler and the disastrous first nine months of World War II seemed to have all but lost Britain the war.

Churchill was asked to become prime minister on the very day that Hitler invaded France, Belgium and the Netherlands. The armies of all three democracies -- together larger than Germany's invading forces -- collapsed within days or a few weeks.

About a third of a million British soldiers stranded in a doomed France were miraculously saved by Churchill's bold decision to risk evacuating them by sea from Dunkirk, France, where most of what was left of the British Expeditionary Force had retreated.

Churchill's greatest problem was not just saving the British army, but confronting the reality that with the German conquest of Europe, the British Empire now had no allies.

The Soviet Union had all but joined Hitler's Germany under their infamous non-aggression pact of August 1939.

The United States was determined at all costs to remain neutral. Just how neutral is emphasized in "Darkest Hour" by Churchill's sad phone call with U.S. President Franklin D. Roosevelt. FDR cleverly assures Churchill that in theory he wants to help while in fact he can do nothing.

Within days of Churchill taking office, all of what is now the European Union either would be in Hitler's hands or could be considered pro-Nazi "neutral."

"Darkest Hour" gets its title from the understandable depression that had spread throughout the British government. Members of Churchill's new War Cabinet wanted to sue for peace. Chamberlain and senior conservative politician Edward Wood both considered Churchill unhinged for believing Britain could survive.

Both appeasers dreamed that thuggish Italian dictator Benito Mussolini might be persuaded to beg Hitler to call off his planned invasion of Great Britain. They dreamed Mussolini could save a shred of English dignity through an arranged British surrender.

In one of the few historical lapses in an otherwise superb film, Churchill is wrongly portrayed as seriously conflicted and about to consider the deal with Mussolini -- until he takes a subway ride and rediscovers the defiance of the average Londoner. The subway scene is pure fantasy.

The movie also sometimes portrays Churchill as less than robust, when in fact he was the most traveled and physically daring of all World War II leaders.

Alone, Churchill saw a pathway to victory against overwhelming odds. As the film notes, Hitler may have had the world's greatest army in the spring of 1940, but he still had no way of transporting it across the British "moat" of the English Channel, given overwhelming British naval mastery.

The German Luftwaffe never could defeat the Royal Air Force.

Churchill assumed that if Britain and its overseas Empire could hold out, then a frustrated Hitler might turn elsewhere -- and thereby gain new enemies (and new British allies).

That is exactly what happened in 1941. A blundering and frustrated Hitler invaded the Soviet Union. Later, he would declare war on the United States. By December 1941, Germany was at war against the world's largest economy (American), largest navy (British) and largest army (Soviet) all at once.

Germany and its allies could never win such a global war.

"Darkest Hour" takes place almost exclusively indoors during Parliament sessions, private meetings and scenes between Churchill and his equally brilliant wife, Clementine. But the dialogue is riveting, the acting superb.

Actor Gary Oldman's masterful Churchill should be a sure Academy Award-winning performance. Oldman reminds a generation of amnesiac global youth that nearly 80 years ago, the dogged defiance of a 66-year-old Victorian Englishman -- portly and not much over 5-foot-6 -- saved Western civilization from Nazi barbarism.

Churchill led the only major nation to have fought Hitler alone. Only Britain fought from the first day to the last of World War II. It alone entered the war without attacking a country or being attacked, but simply on the principle of helping an independent Poland.

The world as we know it today owes its second chance to Winston Churchill and the United Kingdom. Without them, civilization would have been lost in the darkest hours of May 1940.