Victor Davis Hanson
|
Posted: Nov 23, 2017 12:01 AM
Share   Tweet
The opinions expressed by columnists are their own and do not necessarily represent the views of Townhall.com. 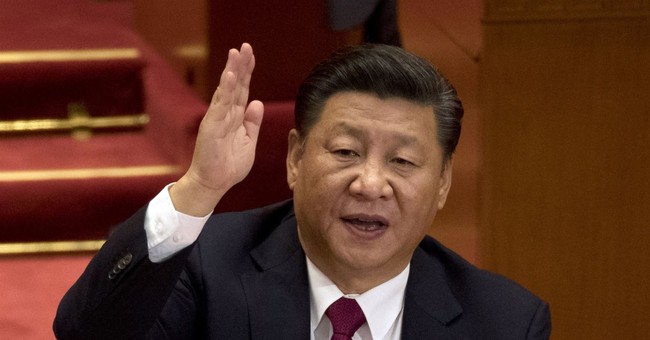 A few weeks ago, Chinese President Xi Jinping offered a Soviet-style five-year plan for China's progress at the Communist Party Congress in Beijing. Despite his talk of global cooperation, the themes were familiar socialist boilerplate about Chinese economic and military superiority to come.

Implicit in the 205-minute harangue were echoes of the themes of the 1930s: A rising new Asian power would protect the region and replace declining Western influence.

President Xi promised that the Chinese patronage offered a new option for his neighbors "to speed up their development while preserving their independence."

In the 1930s, Imperial Japan tried to square the same circle of importing Western technology while deriding the West. It deplored Western influence in Asia while claiming its own influence in the region was more authentic.

Only about 60 years after the so-called Meiji Restoration, Japan shocked the West by becoming one of the great industrial and military powers of the world.

Depressed by the superior technology and wealth of Western visitors, late-19th-century Japan entered a breakneck race to create entire new industries -- mining, energy, steel -- out of nothing.

It soon sent tens of thousands of students to European (and, to a lesser extent, American) universities and military colleges. They mastered Western military organization firsthand.

Japanese engineering students returned home with world-class expertise in aviation, nautical architecture and ballistics -- and a disdain for the supposed "decadence" of their mentors.

The Japanese model was first to inspect and assess the latest European and American military technology: single-wing fighters, aircraft carriers, naval torpedo and dive bombers, and battleships. Then they copied the most promising designs but applied trademark Japanese craftsmanship and government support to make even bigger, sometimes better and often more numerous weapons.

By 1941, Japanese super-battleships, fleet carriers and fighter planes looked almost identical to British and American models. Often they were just as good, if not better.

Japan also felt it had persuasive propaganda to win over its Asian clients. It reminded its Pacific neighbors that Japan's new industries were even more efficient than those of their supposedly more sophisticated European rivals. Tokyo offered greater wealth for Asian clients willing to submit to the Japanese patronage.

Old European powers such as Great Britain and France, Japanese warlords insisted, were spent. They certainly had no moral business assuming the Pacific as their own.

After Japan invaded Manchuria and, later, mainland China, Tokyo seemed to assume that conquered Asian peoples resented not imperialism in general as much as Western imperialism. Supposedly, Asian neighbors would see Japanese exploitation as at least being in the family of the wider Asian community.

Haughty, complacent (and sometimes racist) Americans and British at first scoffed at the idea that previously backward Japan could ever achieve parity with the West. They wrongly conflated Japanese eagerness for copying all things Western with Japan's permanent inferiority.

The Japanese Greater East Asian Co-Prosperity Sphere was officially born in June 1940 to mask Japanese aggression in Manchuria and mainland China, to take over French Indochina a few months later, and to plan a preemptive war against Britain and the United States.

Planning to have control over the oil riches of the Dutch East Indies (modern Indonesia), the rubber of Malaysia, and the mineral wealth of China and Burma, Japan sought complete independence from the West with a so-called "yen bloc" of subservient states.

Satellite Asian clients were expected to overlook Japanese bullying and imperialism in exchange for the advantages of trickle-down wealth from a rising Japanese economy and the paternalistic security offered by the Imperial Japanese Navy and ground forces.

In truth, Japan's Asian subjects soon hated Tokyo even more than they did London or Washington. Yet they made concessions to Japan only because Western appeasement and isolationism precluded active resistance to Japan's rising sun -- at least until Pearl Harbor.

China is currently following the Japanese model of the 1930s and early 1940s.

All the parallels are there: claims of Western decline, appeals to Pan-Asian solidarity, the bullying of neighbors, visions of a Chinese-led trading and currency bloc, new westernized Chinese weapons, and boasts that Beijing has combined the best of both Western technology and superior Asian discipline to become the superpower of the future.

China's miraculous transformation from a peasant subsistence culture is even more impressive than was Japan's -- given that in 2017, China is a nation of more than 1.3 billion people, as opposed to Japan's prewar population of about 70 million.

In our arrogance and complacency, we once scoffed at the Japanese and their idea of the first Greater East Asia Co-prosperity Sphere -- and then suffered what followed.

Are we doing the same thing some 75 years later?