The Ironies of Oil 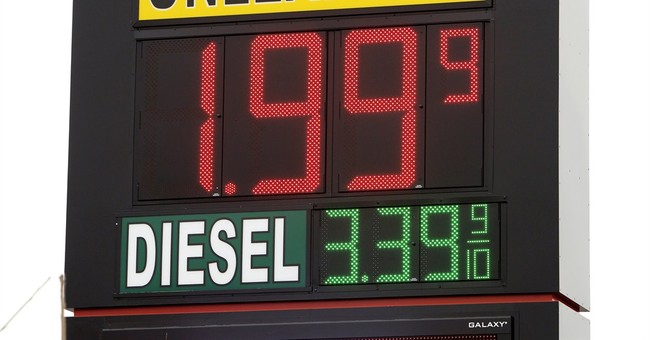 Gasoline prices are on the verge of crashing down to below $2 a gallon. The price of oil may dip below $50 a barrel.

Even with renewed demand from a global economic resurgence, energy prices continue to fall. The U.S. has suddenly become the world's largest combined producer of oil and natural gas.

That fact -- along with a desire to weaken hostile Iran and Russia -- has prompted the oil-rich Gulf sheikdoms to keep pumping oil even as the price falls. In their game of petro-chicken, the desperate sheiks hope that either their poorer enemies will run out of cash, or that fracking in the U.S. will become unprofitable and cease.

Everyone seems to have forgotten about "peak oil" -- the catchphrase of the new millennium.

The world in general, and the United States in particular, supposedly had already burned more oil than was left under the Earth. Under President Barack Obama, gasoline prices had soared. When he entered office in January 2009, gas prices averaged around $1.60 per gallon. Four years later, by spring of 2013, gas prices had climbed beyond $3.50 a gallon.

The Obama administration never much worried about high energy costs. During the 2008 campaign, Obama promised that, "Under my plan ... electricity rates would necessarily skyrocket." Shutting down coal plants and using higher-priced but cleaner natural gas would pave the way for an even pricier mandated wind and solar generation.

In the vice presidential debates of 2008, Joe Biden mocked Sarah Palin for the supposedly mindless campaign mantra of "Drill, baby, drill." Biden intoned that, "It will take 10 years for one drop of oil to come out of any of the wells that are going to be drilled."

The energy secretary-designate, the professorial Steven Chu, in 2008 had unwisely voiced a widely held but wisely unspoken progressive belief that, "Somehow we have to figure out how to boost the price of gasoline to the levels in Europe" -- or about $9 a gallon.

Just two years ago, when up for re-election, Obama reminded Americans, "We can't just drill our way to lower gas prices."

Obama ridiculed the Republican idea of lowering gas to $2 a gallon through new oil-recovery techniques. "They're already dusting off their three-point plans for $2 gas," Obama mocked. "I'll save you the suspense: Step one is drill, step two is drill, and step three is keep drilling."

Such easy rhetoric was backed by action -- or lack of it. The Keystone XL pipeline was put on permanent hold. New fracking leases on federal lands were postponed. Huge areas of oil- and gas-rich federal lands were put off-limits. Some blue states stopped fracking. Money poured into solar schemes like Solyndra.

Decreased use of expensive energy was deemed desirable. Cash-strapped commuters would be forced to drive less, thereby advancing the noble cause of curbing supposed manmade global warming. Federal subsidies flowed for high-speed rail. Wind, solar and other alternate energies could at last become competitive. Cap-and-trade legislation looked as if it might sail through Congress.

Unfortunately for the Obama administration, the new age of sky-high oil prices proved an economic disaster. The natural cycle of recovery never quite followed the end of the recession in mid-2009, as U.S. budget and trade deficits soared.

Abroad, all the wrong countries were empowered as never before.

Iran used its growing riches to step up progress toward producing a nuclear bomb while upping subsidies to terrorist organizations such as Hezbollah.

Then, finally, oil and gas prices plunged due to the "drill, baby, drill," can-do attitude of the private sector. Americans should thank the U.S. oilman -- from the drillers in the field to the engineers behind the scenes -- who did the impossible. They vastly increased the supply of what was supposedly a permanently declining resource, and thereby helped to crash prices.

Oilmen, not the government, returned hundreds of billions of dollars to American consumers. They, not Ivy League experts and Wall Street grandees, kick-started the economy where federal subsidies had failed to. They, not the policies of the Obama administration or the rhetoric of Secretary of State John Kerry, weakened our enemies.

Almost everything Obama tried for six years in an effort to rev the economy -- from near-zero interest rates and $1 trillion annual budget deficits to Obamacare and vast increases in entitlements -- has failed. His foreign-policy stances of resets and leading from behind led to chaos and emboldened enemies.

Yet the United States economy is slowly recovering with cheap energy. Consumers have more money. Industries are returning to U.S. soil.

Abroad, spendthrift oil producers such as hostile Iran, Russia and Venezuela are nearly broke. Friendly rivals such as Japan and the European Union can't compete with the U.S. energy edge.

What Obama once ridiculed is now saving him from himself -- after he had championed policies that nearly destroyed him.

The Greeks had a word for it: irony.