The Department of Food Subsidies 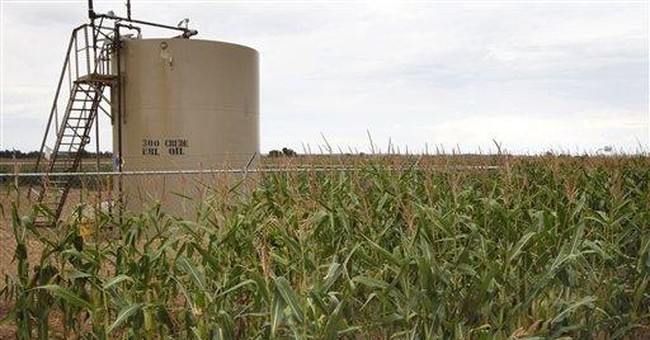 Trending
The Department of Agriculture no longer serves as a lifeline to millions of struggling homestead farmers. Instead, it is a vast, self-perpetuating postmodern bureaucracy with an amorphous budget of some $130 billion -- a sum far greater than the nation's net farm income this year. In fact, the more the Agriculture Department has pontificated about family farmers, the more they have vanished -- comprising now only about 1 percent of the American population.

Net farm income is expected in 2011 to reach its highest levels in more than three decades, as a rapidly growing and food-short world increasingly looks to the United States to provide it everything from soybeans and wheat to beef and fruit. Somebody should explain that good news to the Department of Agriculture: This year it will give a record $20 billion in various crop "supports" to the nation's wealthiest farmers -- with the richest 10 percent receiving over 70 percent of all the redistributive payouts. If farmers on their own are making handsome profits, why, with a $1.6 trillion annual federal deficit, is the Department of Agriculture borrowing unprecedented amounts to subsidize them?

At least $5 billion will be in direct cash payouts. Yet no one in the USDA can explain why cotton and soybeans are subsidized, but not lettuce or carrots. In fact, 70 percent of all subsidies go to corn, wheat, cotton, rice and soybean farmers. Most other farmers receive no federal cash. Yet somehow peach, melon and almond growers seem to be doing fine without government checks in the mail.

Then there is the more than $5 billion in ethanol subsidies that goes to the nation's corn farmers to divert their acreage to produce transportation fuel. That program has somehow managed to cost the nation billions, to send worldwide corn prices sky-high, and to distort global trade in ethanol at the expense of far cheaper sugarcane. And while the Obama administration discourages new production of far cheaper transportation fuels derived from natural gas, oil, shale oil, and tar sands -- whose newly discovered known reserves are nevertheless reaching all-time highs -- it is borrowing billions to pay farmers to grow uncompetitive fuel.

About every 10 years or so, public outrage forces Congress to promise to curtail the subsidy programs. But when the deadline arrives, our elected officials always find a trendy excuse like "green energy" or "national security" to continue welfare to agribusiness.

Free-market conservatives don't dare touch the Department of Agriculture, given the senatorial clout of Midwest farm states and the mythology of the independent American yeoman farmer. Don't expect left-wing Democrats to object either. In a brilliantly conceived devil's bargain, the Department of Agriculture gives welfare to the wealthy on the one hand, while on the other sending more than $70 billion to the lower income brackets in food stamps.

Originally, the food stamp program focused on the noble aim of supplementing the income of only the very poor and the disabled. But now eligibility is such that some members of the middle class find a way to manipulate such grants. In fact, 2011 could be another sort of record year for the Agriculture Department, as it may achieve an all-time high in subsidizing 47 million Americans on food stamps -- nearly one-sixth of the country.

If 30 years ago the public had sympathy for the strapped family who pulled out clumsy paper coupons to buy essentials like rice and bread at the checkout line, today it is often turned off by the now common spectacle in our superstores of plastic government credit cards being used for food purchases -- freeing up the shopper's cash for another basket of snacks, alcohol and other non-essential goods.

The Department of Agriculture is now sending more than $1 billion to African-American farmers who sued the government, alleging past discrimination in federally subsidized farm lending programs. But such understandable reparations are experiencing mission creep, as the number of would-be recipients claiming past discrimination far exceeds the number who actually farmed -- prompting all sorts of other racial groups to demand that they also be given their own farm reparation cash in equal measure.

The multilayered Department of Agriculture has no real mission, much less a methodology other than to provide cash to congressional pet constituencies. Its vital functions such as crop reporting and forecasting, food inspection and scientific research are buried beneath politically driven cash transfers and could easily be farmed out to other agencies.

In these days of record federal deficits and unsustainable national debt, it is long past time to eliminate the department -- or least rename it "The Department of Food Subsidies."

(Victor Davis Hanson is a classicist and historian at the Hoover Institution, Stanford University, and the author, most recently, of "The Father of Us All: War and History, Ancient and Modern" You can reach him by e-mailing author@victorhanson.com.)