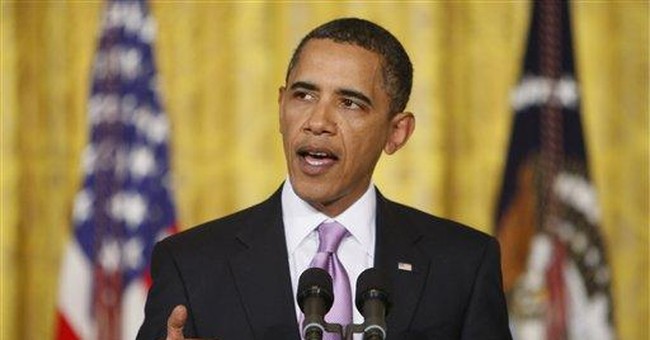 Why in matters of stupid behavior do liberals and Democrats often get second and third chances from the media and general public not accorded to their conservative and Republican counterparts?

We're seeing it now in the national reaction to Senate Majority Leader Harry Reid's reported racial gaffe. Compare how he's being treated to what happened to Trent Lott in 2002.

Public and media pressure forced Lott to resign his Senate minority leadership post after going way over the top at a private birthday party for Strom Thurmond. In his tribute to Thurmond, Lott heaped praise on the centenarian senator's 1948 Dixiecrat presidential candidacy -- despite the fact it was predicated mostly on promoting racial segregation.

Compare that to what's happening to Reid, who reportedly remarked in 2008 (and has not denied) that then-candidate Barack Obama could win the presidential race because he was "light-skinned" and did not adopt a "Negro dialect unless he wanted to have one."

Almost immediately, most of those in the Democratic establishment and in the media who once had gone after Lott insisted that Reid's liberal credentials exempted him from resignation.

Obama himself in 2002 called for Lott to step down from his leadership post. Reflecting the general double standard, the president has made no such requests of Reid -- apparently, as Obama put it, because the senator is a leader on "issues of social justice."

Vice president Joe Biden as a presidential candidate once characterized Barack Obama as "the first mainstream African-American who is articulate and bright and clean and a nice-looking guy."

What exactly did Biden mean by "clean?" The press, of course, didn't bother to probe too deeply, instead seeming to think that good old Joe Biden was running off his mouth again.

That leeway was quite in contrast to the national outrage, led by the media, in 2006 after Virginia Republican senatorial candidate George Allen stupidly pointed to a volunteer for the opposing campaign and called him "Macaca or whatever his name."

In 2005, public outrage properly arose when it came out that syndicated columnist Armstrong Williams had accepted $240,000 to promote the Bush administration's "No Child Left Behind Act" -- while purportedly posing as a disinterested public commentator.

His syndicate, Tribune Media Services (which distributes my column), properly dropped Williams, and the government lifted his contract.

But recently the same media was mostly silent when it was disclosed that MIT professor Jonathan Gruber had received $400,000 in government money for work on Obama's health-care overhaul.

Surely, it was a conflict of interest for Gruber to offer himself to the press as an academic health-care expert while keeping silent about money he was making to toe the Obama line.

For months in 2008, only the National Enquirer reported on liberal presidential candidate John Edwards' affair and alleged illegitimate child.

But the press corps was quiet when Biden told Couric he thought Franklin Delano Roosevelt had not only been president in 1929, but had addressed the nation about the recent Depression on television -- well before TV was commercially available.

In general, we chuckle in embarrassment that tongue-tied George Bush used to say something like "nuclar" for nuclear. But who really cares that mellifluent Barack Obama apparently thought Austrians speak "Austrian" rather than German?

Why the disproportionate media reaction to the relative gaffes and bad behavior by liberal and conservative politicians?

The answer is not just the usual explanation that most in the media are sympathetic Democrats.

Instead, the public is conditioned by the media and an elite establishment to assume that Obama, Reid and Biden are superior moralists -- more interested in "issues of social justice."

So when such supposedly more intelligent humanitarians lapse, their offensive or dumb remarks are written off as atypical. Or maybe they are due to extenuating circumstances or honest mistakes.

In contrast, any inanity of a Bush, Lott or Palin is seen as yet more logical proof of their shallow, unsophisticated emphasis on self rather than society.

So, why damage the career of a smart, well-meaning progressive for a moment's gaffe when his aims are so much more exalted, so much more moral than his conservative counterparts?

Yet if all that were true, why, then, as we have seen, do liberals prove as insensitive or unaware as their conservative counterparts?