It's the Debt, Stupid 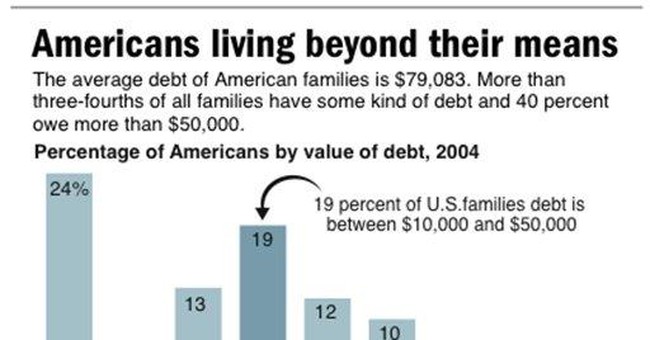 Who caused the American financial panic and the wild swings in our financial system -- and what are we going to do about it in the long term after the markets settle down?

Republicans point to Fannie Mae and Freddie Mac. Politically wired executives at Fannie and Freddie cooked the books. They received mega-bonuses and took cover through campaign gifts to their Democratic supporters in Congress. Then almost everyone involved justified their scams by claiming that, as good liberals, they only wanted to help the poor buy homes.

Democrats counter that Republicans always pushed for more deregulation and, as good conservatives, kept quiet about multimillion-dollar CEO bonuses paid out from shaky Wall Street firms and passed off as good for business - rather than symptoms of suicidal greed.

Long ago, John McCain warned about the antics of Freddie and Fannie, and later charged that Barack Obama and some of his advisers received too much money from these agencies for looking the other way. Obama has countered that McCain was a reckless deregulator and that some on his staff were lobbyists for Wall Street firms.

The blame game goes on and on. But so far no one seems willing to tell the American people the truth: It is not just "they," but we, the people, who have recklessly borrowed to spend what we haven't yet earned.

Take energy. In recent years, we've borrowed trillions of dollars overseas to buy oil from foreign producers. Wind and solar may sound like neat and easy solutions. But for decades to come, Americans must drill more oil and natural gas of our own for transportation and heating; we must build more coal and nuclear power plants to power the electric grid; and we must conserve. Otherwise, we'll go broke before clean alternate fuels become accessible and affordable.

Our energy challenges do not just concern independence, natural security and global warming. They involve basic financial solvency as well. Yet so far, none of our public officials have warned us that the energy crisis is largely a money matter: We're borrowing too much to buy what we won't or can't produce at home.

Second, as a nation of debtors, we are renting money from Asia to buy its exports with our credit cards. Given our talents and natural wealth, we could easily consume more than others in the world and still balance the books. But Americans cannot charge all that we desire on unlimited credit. Surely one of our presidential candidates can warn the American people to save a little more, use our credit cards a little less and pay off what we already owe.

Third, the government can only hand out more entitlements by borrowing even more to pay for them. Raising taxes on anyone in a recession is insane. But even crazier is cutting them further at a time of skyrocketing national debt without commensurate reductions in spending.

So who will tell the people that we can't raise - or reduce - taxes and that we can't borrow for any more new programs until we first cut expenses and begin paying off the trillions we've already borrowed?

In a hugely productive economy that creates each year some $13 trillion of goods and services, the government has the resources to make real headway in paying down our $10 trillion national debt in relatively short order - if we have leaders brave enough to quit promising to spend a few more hundred billion here and there that we simply don't have.

Fourth, will some candidate explain to the wheeler-dealer public that most real estate is not going to double or triple in value every few years? Instead, houses should once again be seen as homes to live in, rather than investments to get rich from.

If 70 percent of the American people scrimp to buy a home, we can't endanger their financial solvency by waiving the rules for others, who can't or won't pay the mortgage debts they freely incurred. It's time to tell the public that you must budget to buy a house, see it as a place to raise a family and pay the mortgage you took on. And if that's not possible, then keep renting.

The problems on Wall Street, our energy woes, the election-year fight over taxes versus more programs, and the housing crash have one common denominator: massive debt. They are simply the collective reflections of our own spendthrift habits of buying things with borrowed money that we now either can't or don't want to pay back.

In this year's presidential race, the honest candidate who stops promising endless bailouts and has the guts to lead us out of debt could well end up winning.