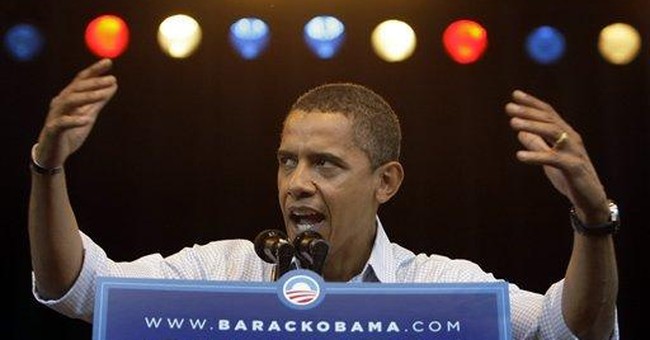 The 2008 presidential campaign is supposed to be a referendum on "change" -- who brings it and who doesn't.

Real change, however, hasn't yet proven to mean new politics.

The "hope and change" Barack Obama sounds like a traditional Northern liberal who always wants to raise taxes on the upper classes and businesses, expand government services and provide more state assistance to the middle class and poor.

It's certainly true that either the next president or next vice president will not be a white male. But does that mean de facto that the country will be run any differently?

There is, however, one area where we might have seen real change. The Democrats could have not nominated another lawyer. This may partly explain why former military officer John McCain and working-mom Sarah Palin are polling near even with Obama and his running mate, Joe Biden, in a year that otherwise favors the Democrats.

A snowmobiling, fishing and hunting mom of five who was trained as a journalist seems like a breath of fresh air -- and accentuates the nontraditional background of former naval officer John McCain. If the Republicans win, it may well be that, like George Bush and Dick Cheney, or Ronald Reagan and George H.W. Bush, they weren't members of the legal culture.

On the Democratic side, Barack Obama got out of Harvard Law School, worked for a firm, offered his legal expertise as a community organizer and went into politics. Joe Biden graduated from law school and almost immediately ran for office.

In the Democratic primary, winner Obama, runner-up Hillary Clinton and third-place finisher John Edwards were all lawyers. In 2004, both Democratic nominees, John Kerry and Edwards, were lawyers. Al Gore, who ran in 2000, left law school without a degree and went into politics. His running mate, Joe Lieberman, was a Yale-trained lawyer. Mike Dukakis, the 1988 Democratic presidential nominee, was a Harvard-trained lawyer and ran with lawyer Lloyd Bentsen.

In fact, every Democratic presidential nominee for president and vice president in the last seven elections -- except Gore who dropped out of law school to run for Congress -- has been a lawyer.

What saved Bill Clinton in 1992 and 1996 was the presence in the race of third-party conservative candidate Ross Perot -- and the image of Clinton as a Southern moderate, which seemed to reassure voters that this particular Yale-trained lawyer was nevertheless not quite another Democratic nominee like Walter Mondale or Dukakis.

Of course, there have been Republican nominees and presidents who were lawyers -- Richard Nixon, Gerald Ford and Bob Dole -- but recently far less so than the Democrats, as the administrations of Ronald Reagan and the two Bushes attest.

So, what's wrong with the Democratic nominee once again being a lawyer?

After all, legal minds are trained to think precisely and evaluate both sides of an issue.

The problem is that lawyers usually do not run companies, defend the country, lead people, build things, grow food or create capital.

If this year Democrats were looking for populist candidates from diverse backgrounds and training who talked and thought differently from those of the past, then why didn't they nominate someone who was not trained in writing legalese and working the government legal labyrinth?

Instead, they needed different sorts, candidates who might have sounded a little rougher, a little less condescending and a little more like most voters. Most Americans have never been in -- and never want to be in -- a courtroom.

In the past, law school has not necessarily been considered ideal presidential training. Harry Truman was audacious perhaps because he had tried and failed as a haberdasher. Dwight Eisenhower learned about leadership from his years as a general. George H.W. Bush was a businessman and Ronald Reagan an actor. Even unpopular presidents like Jimmy Carter (farmer) and George W. Bush (businessman) brought different perspectives to the job.

Change for Democrats this year was not a new strain of liberal politics or a different race or gender. Instead, they needed to have run candidates who talked, thought and acted differently from their usual run-of-the-mill sorts.

And that meant someone other than the same old, same old legal eagles who appear glib -- but so often manage to lose in November.