Blame Everyone But Russia! 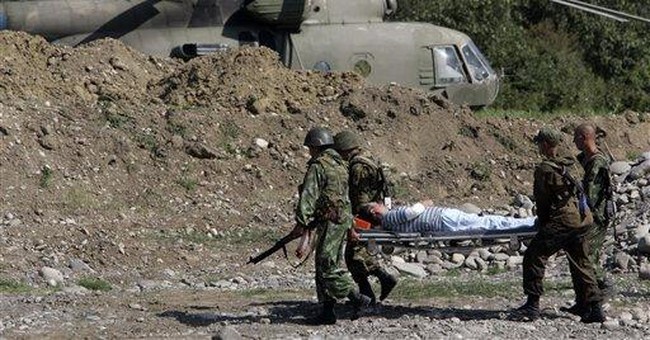 Everyone is distracted by the Olympics. The squabbling here on the campaign trail consumes the media. Two presidential candidates and a lame-duck president all are weighing in on foreign policy. No wonder Vladimir Putin thought it was a good time to invade Georgia.

Apparently the Russian prime minister knew exactly what he was doing but assumed no one in the West did. And he was right.

Our pundits and politicians are all over the map as Putin is variously portrayed as villain, victim, patriot, tyrant -- and more still.

The neoconservatives: We must make Russia pay a terrible price for subverting a democracy. Our policy of promoting liberal governments among the former Soviet republics, with integration into Europe and relations with NATO, was sound, and it cannot be allowed to be aborted by Putin.

Bottom line: Form a ring of democracies around Russia until it sees the light and likewise evolves into a constitutional state.

The paleoconservatives: Putin is only protecting his rightful national interests in his own backyard, which don't really conflict with ours. You have to admire the old brute for taking care of business. Neocons -- and no doubt Israelis in the background -- provoked that Georgian loudmouthed dandy Saakashvili to stick his head in a noose -- so he deserved the hanging he got.

Bottom line: We should cut a deal with our natural ally Putin to keep out of each other's proper sphere of influence -- and let each deal as it wishes with these miserable little third-party troublemakers.

The realists: Don't poke sticks at the Bear. We should define what our strategic interests in the region are. Maybe we can protect Eastern Europe, the Baltic republics and the Ukraine -- but only if we accept that Georgia just isn't part of the equation. We need to back out of the saloon with drawn pistols, and save as much face as we can.

This is a reminder that we forgot the role of honor and fear in international relations when we encouraged weak former Soviet republics merrily to join the West and gratuitously humiliate Russia.

The left wing: Putin's unilateral pre-emption was just like our own in Iraq. His recognition of South Ossetia's independence was no different from our own in breakaway Kosovo. So America is just as bad. Russia's attack is the moral equivalent of America arbitrarily removing the tyrant Saddam. It's all about Big Oil and pipelines anyway -- along with Bush, Cheney, Halliburton et al.

Bottom line: Another long overdue comeuppance for the American Empire.

The liberal mainstream: Both sides are at fault. We understand Georgia's plight, but also sympathize with Russia's dilemma. We should consult the United Nations, involve the European Union and encourage European diplomacy. We can learn from the multilateral NATO teamwork in Afghanistan.

The Europeans: Prioritize! 1) Don't jeopardize gas supplies from, and trade with, Russia; 2) Avoid any confrontation in any form; 3) Make sure that Bush does not do something stupid to draw us too far in, but at least does something to avoid leaving us too far out.

Bottom line: Luckily, Tbilisi is still a long way from Berlin and Paris!

The rest of America: My lord, Putin is acting just like Brezhnev! But they told us that he just wanted to democratize and reform Russia, integrate with NATO and the EU, and help fight radical Islam! So why did he get angry with Georgia when it just wanted to do the same things he was supposed to be doing? That backstabber wasn't honest with us!

The more Russia promises to leave Georgia, the more it seems to stay put. One reason may be that Putin keeps counting on us either to be confused, contradictory or angrier at ourselves than at Russia over his latest aggression. And given our inability to speak with one voice, he seems to be absolutely right.

Sorry, But That’s the Rule: President Asterisk Is A Draft Dodger
Townhall
Blue-check called out for lying about Sen. Josh Hawley
Twitchy
Rand Paul Serves As An Example Of How Not To Be Bullied As George Stephanopoulos Badgers Him On Election Fraud
Redstate
You Knew Trump Sacrificed While Working for Free as President, Now We're Learning How Big a Financial Hit He's Taking
PJ Media