Veronique de Rugy
|
Posted: Mar 17, 2022 12:01 AM
Share   Tweet
The opinions expressed by columnists are their own and do not necessarily represent the views of Townhall.com. 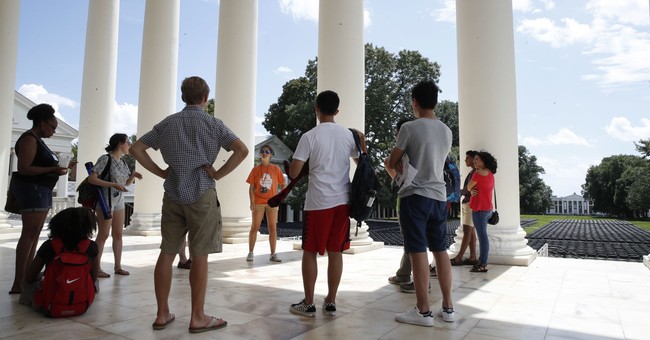 We've all heard stories about university administrators cracking down on free speech. But free expression is suffering even without these enablers, and that should worry us.

In a recent New York Times op-ed, University of Virginia senior Emma Camp powerfully defended freedom of expression as she described her own practice of self-censoring while on campus. In doing so, she highlighted the disappearance of free-speech culture, both in America at large and at a university with respectable free-speech credentials.

It is obvious that Camp values free expression and welcomes a diversity of viewpoints. In fighting for changes, she is also willing to face some consequences for her speech. Yet you feel her pain as she admits being fearful of speaking up, and her disappointment when she confesses to often taking the easy way out by remaining quiet.

As an adult with views that are often distinctly different from those of my personal and work friends, I can relate. Of course, it's sometimes good to hold one's tongue about dissenting opinions, like at Thanksgiving dinner or a birthday party with friends whose opinions vary widely. There is more to life than just the debate of ideas. However, such silence is a problem when one feels pressure to hide opinions, or even acknowledge them, in settings -- such as classrooms -- that should encourage the search for truth by welcoming different viewpoints.

But Camp's op-ed also resonated with me because my daughter is in her first year at UVA. As I read, I could hear my daughter's own account of her experience. I assumed that her feeling of having to stay quiet would pass as she encountered other students eager, like her, to have open conversations and exchange opinions. However, I now must face the possibility that it will not be as easy as I had hoped.

This situation is troublesome given UVA's well-deserved reputation as one of the best higher-education institutions in the country when it comes to its respect for free speech. In fact, in June 2021, UVA's Board of Directors formally approved a statement reaffirming its commitment to free expression and open inquiry. In addition, for several years running, UVA has been given the "Green Light" speech code rating by the prestigious and uncompromising Foundation for Individual Rights in Education (FIRE).

What UVA suffers from isn't anti-free-speech rules. Instead, it's the loss of its free-speech culture -- something that's happening across America.

The destruction of this culture is subtle. It happens over time through comments signaling that some positions are too objectionable to be stated. After a lecture by George Mason University economist Alex Tabarrok on the COVID-19 pandemic, my daughter mentioned to her suitemates that a vaccine was practically ready in January 2020, but that the regulatory ordeal was such that it took almost a year to get an emergency approval. She was mocked as someone who gets her information from Facebook. She knows now to abstain from COVID-19 conversations.

Standing alone, each mockery is benign. But when repeated on a large scale for every topic from vaccine regulations to politics, sex or race -- with some comments even treated as an equivalent to physical violence -- many students will choose to stay silent.

Some students are fighting back, of course. Camp is one of them. At Emory University, some tried to form a pro-free-speech alliance only to be opposed and denied by the student government association -- not university administrators -- after some law students complained that free speech is "divisive" and "uncomfortable."

I hope they won't give up, because as free speech litigator David French tweeted, while "Legal threats are more immediately dangerous to free speech than social shame," culture matters too. He adds, "a nation that turns its heart away from free speech will eventually change its laws."

We are already seeing some of that happening, with other university administrators caving to students and imposing new speech restrictions or demanding public apologies from students for their "offensive speech." In a few states, some Republican legislators are also trying to restrain discussions about race and sex in public universities.

How long do we think our First Amendment protections can endure when a rising generation thinks this way? Not long, if those who believe in a liberal order don't band together to apply counter-pressure. At the very least, we must defend students who have the guts to stand up in this environment.