Veronique de Rugy
|
Posted: Apr 08, 2021 12:01 AM
Share   Tweet
The opinions expressed by columnists are their own and do not necessarily represent the views of Townhall.com. 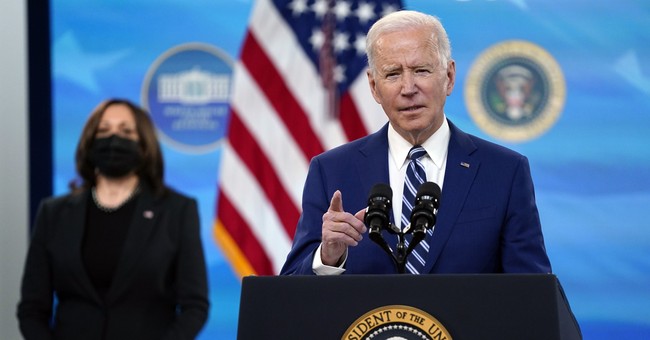 "A crony anti-infrastructure plan" is, sadly, the best description of the Biden administration's proposed $2.3 trillion infrastructure plan. It's insanely expensive and unnecessary, especially coming, as it does, on top of last year's fiscal insanity.

Over the past year, our leaders have spent $6 trillion in bailout and COVID-19 relief funds. They've driven local, state and federal government spending up to 43.5 percent of GDP, meaning that we're already in financial trouble. Now they want to top it off with trillions more of wasteful spending, describing it as "infrastructure" spending, which arguably everyone likes. But once you look at what's in the bill, you realize that the label is mere marketing for more handouts to politicians' friends and payments for pet projects.

A large share of the plan, for instance, is a massive handout to private companies. The proposal includes $300 billion to promote advanced manufacturing, $174 billion for electric vehicles, $100 billion for broadband, $100 billion for electric utility industry, and more. This is interesting since Democrats never miss an opportunity to rail against big corporations while professing their love for small companies. Yet they're eagerly subsidizing their big corporate friends whether these companies need it or not.

And in most cases, they don't, since they are big infrastructure investors already. AT&T, Verizon and others are set to receive $100 billion for broadband despite their collective investment of more than $50 billion in broadband-related network infrastructure. The same is true of electric power companies, which are not only profitable firms but also massive investors in the electrical grid. In fact, during the pandemic, they actually increased their capital expenditures (or CapEx) to $141 billion from $121 billion. Yet, they will also get $100 billion.

Freight railroads, which will get a share of that $80 billion, are very lucrative, too. As former budget director David Stockman explains in a recent newsletter, freight railroads "have prodigiously reinvested in tracks and rolling stock." He adds that these companies don't need help, "especially not Warren Buffett, who owns a big chunk of the Burlington Northern Santa Fe... The latter, in fact, posted $23.5 billion of sales, $5.5 billion of net income and $3.6 billion of CapEx during 2019. And the figures for the other big publicly held railroad companies are similar."

Biden's plan also includes hundreds of billions that have nothing even remotely to do with infrastructure. One example is a $400 billion handout to expand access to long-term, home- and community-based care services under Medicaid and extend its Money Follows the Person program. While this has nothing to do with infrastructure, The Wall Street Journal explains how it has everything to do with bolstering unions, writing that Biden's proposal highlights that "his home-care plan would 'create good middle-class jobs with a free and fair choice to join a union... and the ability to collectively bargain.' This is where the SEIU comes in." The Service Employees International Union, they write, "has been able to exploit Medicaid home-care programs to expand its membership with help from state Democratic lawmakers."

Finally, this plan would be paid for by eliminating tax preferences for fossil fuel companies, raising the corporate tax rate to 28 percent from 21 percent, doubling the top capital gains rate and imposing a large minimum tax on the overseas earnings of U.S. companies. To the extent that Democrats are trying to pay for this spending with taxes, they're doing it in a way that belies their claim that this plan will result in a boost in quality infrastructure. That's because, as the Cato Institute's Chris Edwards reminds us, these tax hikes would punish the investors and corporations that drive infrastructure and own 65 percent of nondefense, nonresidential infrastructure. The federal government only owns 5 percent of it, with state and local governments owning 30 percent.

The Tax Foundation estimates that Biden's tax increases would reduce investment in fixed assets by more than $1 trillion. That means fewer infrastructure investments, too. This is unfortunate since a 2016 Congressional Budget Office report finds that private sector investments deliver twice the economic returns of federal investments. But as Edwards notes, "Biden's proposed green and labor union regulations would further undermine infrastructure investment."

There's much more to say about this plan and its backers (who continue to assert that it will grow the economy and finally fix our allegedly "crumbling" infrastructure). But for now, just remember that it's best described as a crony anti-infrastructure plan.