Veronique de Rugy
|
Posted: Jan 31, 2019 12:01 AM
Share   Tweet
The opinions expressed by columnists are their own and do not necessarily represent the views of Townhall.com. 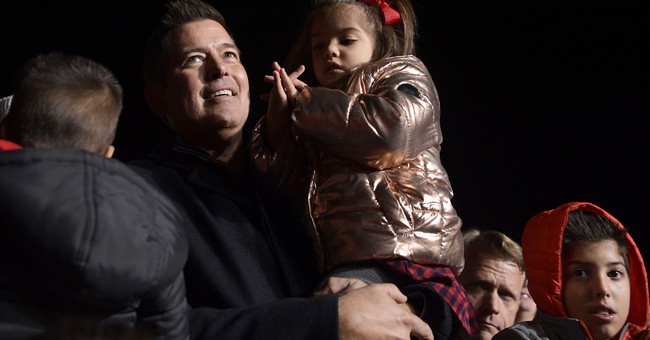 Wisconsin Republican congressman Sean Duffy recently introduced a bill to give President Trump new powers to raise tariffs in response to actions taken by other individual countries on American goods. This effort to expand the president's power should make the White House happy, since Trump is eager to see his trade efforts bear fruit. We'll likely hear about that during his State of the Union address. But this bill will also move our nation back to the days of the infamous Smoot-Hawley Tariff Act of 1930.

It's a fact that some countries impose higher duties on imports from America than the United States imposes on similar products it imports. For example, the European Union imposes a 10 percent tariff on imported American cars, while we charge only a 2.5 percent duty on European car imports. According to congressman Duffy and President Trump, as long such differences in rates persist, we really won't or can't have free trade.

Their solution is legislation that would give the president power to raise tariffs on American imports to levels that foreign governments impose on American exports. Such legislation is believed to kill two birds with one stone.

First, it would allegedly rectify the supposed "unfairness" by equalizing duties. Second, it would force foreign governments to lower their tariffs, making trade freer for everyone's benefit. Talking to Fox News recently, Rep. Duffy declared that his strategy will guaranty a speedy resolution and lower tariffs, since no country can afford to not to trade the United States.

These arguments are the same ones the Trump administration served up a year ago when it started a trade dispute with our closest allies by unilaterally raising steel and aluminum duties. That dispute evolved into a trade war with China. Not to worry; the administration claims that trade wars are easy to win, and that no countries will dare to retaliate (against our metal tariffs) because, as Duffy echoed, they can't afford to cut themselves off from our huge market.

Wrong. Pretty much all countries have retaliated against Trump's tariffs. So far, nobody has caved.

Moreover, while Rep. Duffy claims he is "a free trader," apparently he doesn't understand that the economic case for free trade is fundamentally unilateral. A country gains by lowering its tariffs regardless of what other countries do. Yes, it would be great if all duties around the world were cut to zero. However, the United States would still benefit from lowering its tariffs to zero, independent of other countries' trade policies.

That's because U.S. tariffs are taxes, the burden of which is hung like a millstone around the necks of American consumers. Similarly, foreign tariffs on U.S. exports fall heavily on foreign consumers. As such, it defies logic for an American president to punish American consumers in order to prompt other governments to be kinder to consumers in their jurisdictions by ultimately lowering tariffs.

Finally, according to a detailed paper by my colleague Dan Griswold appropriately called "Mirror, Mirror, on the Wall," it seems like Rep. Duffy and administration officials aren't really sure what a reciprocal system of tariffs should actually look like.

For example, matching higher foreign tariffs line for line would be a very daunting task in our post-war global trading system, which rests on a simple principle: While World Trade Organization countries can set duties as they please, they must apply the same rates on the same item no matter where it comes from. This requirement means that no member can unilaterally raise a duty on given items coming from one country alone. If they do, retaliations and litigations will jeopardize a system that has done so much to free trade over decades.

Rep. Duffy and the president may have to face taxpayers' wrath when they realize that they're the reason why the price of thousands of the goods they consume has gone up and their standard of living has gone down.

Focusing on our 11 largest trading partners, Griswold also shows that a reciprocity plan would require raising more than 25,000 duties on "$583 billion in imports to the United States, raising the duties on 45 percent of imports from the affected trading partners."