Veronique de Rugy
|
Posted: Jan 03, 2019 12:01 AM
Share   Tweet
The opinions expressed by columnists are their own and do not necessarily represent the views of Townhall.com. 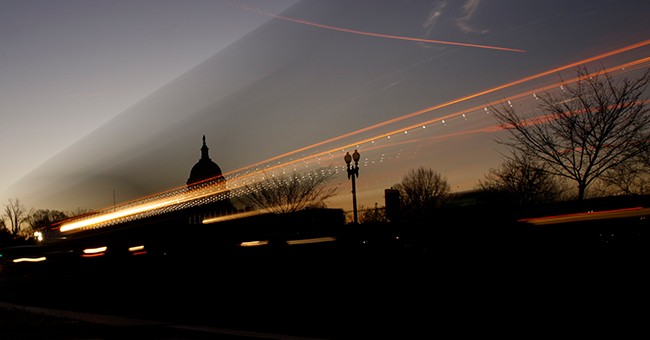 Christmas is over, and the new year begins. Now Congress needs to go back to work and clean up the mess it left behind last year.

Looking back, 2018 reveals a sad picture of what a Republican Congress and White House have failed to accomplish. Instead of fiscal restraint, we got a spending explosion. Instead of restoring the regular budget order, we got more of the same fiscal chaos and short-term spending-bill nonsense punctuated by threats of government shutdowns. And at the end of that tunnel of disarray, only heightened uncertainty and heavier debt remain.

Instead of draining the swamp, we got more of the special-interest lobbies getting their way with elected officials who happily hand out government privileges. This lobbying by the steel industry, what economists call rent-seeking behavior, resulted in protective tariffs. That's a prime example of the rampant cronyism in Washington. We also got more tweets and impulsive comments by the president, all driving a volatile stock market and an increasingly nervous polity.

There were a few good developments, including a bit of deregulation and a decent economy fueled to some extent by the tax reform of 2017. Also, in a rare instance where bipartisanship works for the protection of individual rights against the state, Congress and the administration passed a criminal justice reform bill called the First Step Act -- hopefully one of many to come.

Speaking of things to come, here are some projects that this new divided Congress and the administration could work on in 2019 to make up for 2018's dismal performance.

First and foremost, take steps to put the government on more solid financial ground. Driven by excessive spending, Uncle Sam has now accumulated nearly $22 trillion in debt. The burden of servicing this debt falls on each and every American. That's roughly $67,000 for each man, woman and child. Some of this repayment will demand future tax increases, precipitating lower growth, lower wages and, hence, lower standards of living.

While parts of the tax cut were very pro-growth and will generate substantial economic growth, they won't be enough to fully pay for the loss in revenue. However, focusing on the effects of these tax cuts misses the bigger picture. We're in this mess because nobody wants to reform the programs that are the main drivers of our debt: Social Security, Medicare and Medicaid.

I want to believe that many Republicans and Democrats are aware of our fiscal condition and that, deep down, they know that they must start to legislate responsibly. It would be amazing if they could, for a change, speak up and take the first steps toward finding a solution. Sadly, the incentives of politics are so biased toward fiscal irresponsibility and big government that meaningful reform will be difficult, borderline miraculous. However, I still have a little of that Christmas spirit left in me, so I'll allow myself to dream for the span of one column.

Next on my wish list for 2019 is the termination of all crony programs that benefit well-connected and large companies at the expense of everyone else. They include the U.S. Export-Import Bank, everything in the Department of Commerce (apart from the Census Bureau and the Patent and Trademark Office -- the two actually mentioned in the Constitution), many of the programs in the Department of Energy, and many other programs for agricultural subsidies, special favors for small businesses, wasteful defense spending and, of course, tariffs.

Just as important, members of Congress must provide the Dreamers with a path to living here legally. I'd prefer that they pass comprehensive immigration reform, but considering the anti-immigration sentiments of many in Congress (some of whom even want to reduce legal immigration), that's not in the cards. Months have passed since President Trump canceled the Obama-era program that protected individuals living in the country illegally whose parents brought them to this country when they were children. The threat of deportation leaves them in limbo in a country that, for all intents and purposes, has been their home since childhood. There's bipartisan support for providing them with a pathway to citizenship, and the president himself seems empathetic to their plight. So what are they waiting for?