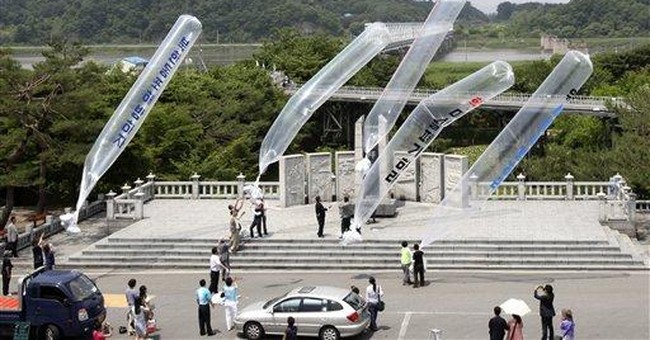 Editors' Note: Every month, Townhall Magazine highlights some of the outstanding blogs written by users in our community. The following is an entry from MGraves and appears in the June issue of Townhall Magazine.

It is entirely natural that North Korea continues their pursuit of nuclear weapons. Kim Jong Il may not be playing with a full deck, but his conception of the country’s national interest is well served by his defiance of “international opinion.” He suffers no real consequences for anything he does. Japan has increased sanctions, but Japan clearly has not had a great deal to do with the North Koreans for some time.

The current thought process—that increasing the “carrots” and “sticks” on the table can alter a nation’s behavior—holds any water only if incentives cause a fundamental shift in the decision-making process of a country. World leaders have hemmed and hawed about the heinous Robert Mugabe, but his only concession to international opinion was the installation of his opponents as junior partners in his government. Mugabe delayed the unity government until it could be formed in his image. He then went about intimidating the Movement for Democratic Change (MDC)—including throwing an MDC cabinet appointee in jail on charges of terrorism—while continuing his policies. But now Mugabe could count on international “approval” by accepting the MDC into the government.

North Korea has reached agreements with the U.S. under both Presidents Bill Clinton and George W. Bush requiring the North Koreans to surrender their weapons programs. The “sticks,” however, were insufficient in causing a reordering of perception in Kim Jong Il, thus the country has still been able to pursue its parochially defined national interest with no repercussions.

The same situation is currently occurring in Iran. The U.N. makes noise about imposing sanctions, though meaningful actions are impossible as long as autocratic Russia and China are permitted veto authority. The Mullahs’ perception of national interest will not change if the U.S. starts playing nice: Iran is getting whatever it wants without having to give anything up. It is as though Iran was bargaining from a position of strength when, in reality, Iran is schizophrenic and lacks the ability to defend itself against a modern nation—it can hardly defend itself against itself.

Diplomacy works only when its goals—and the means of reaching those goals—are clearly defined. Only when the goals and means are established can the process of altering another nation’s interests begin. With no clear goals, American foreign policy becomes (and is) haphazard and disorientated, unable to define its own interests, let alone alter the perceptions of another nation.

Diplomacy can be effective only when it is coherent, consistent and dedicated to advancing a state’s own interests, even at the expense of another nation’s perceptions.

The framework of American diplomacy concerning North Korea and Iran holds the seeds of failure. Neither effort will succeed as long as Russia and China are granted authority to veto the actions of free peoples. Rather than being treated as partners in American diplomacy, such nations ought to be viewed as, at best, obstacles, and at worst, adversaries.

CARTOONS | AF Branco
View Cartoon
Freedom Is Catching: Here's Where You Can Now Shop Without a Mask
Spencer Brown
The Latest Leftist Takes on the Iron Dome Are Quite Something
Katie Pavlich
Republicans Celebrate SCOTUS Decision to Review Abortion Case as Planned Parenthood Gets Nervous