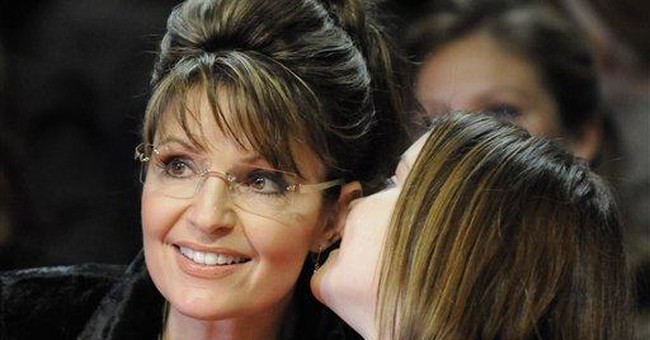 "No new ideas." That was the most prominent of the criticisms of Sarah Palin's speech at MSNBC's too-cool-for-school "Morning Joe" on Monday. The more general critique of former Gov. Palin's future was that while she certainly had star power, she could never speak to more than a fraction of even Republicans. The proof of the latter point was made with the evidence that many important Washington Republicans could never support her for more than cheerleader to her marginal people.

They also pointed out that she had kept out of races in Massachusetts and Virginia, where it was thought she might not help. Gosh, a lack of ego paired with shrewd political judgment -- that is surely not wanted in a leader. (In both those incidents, the president himself couldn't resist going in and contributing to his candidates' losses.)

If I hadn't still been lying in bed, I would have fallen over laughing at this summary rejection by the guardians of the existing order of the only national figure who both: (1) unabashedly but politely criticizes President Obama where it hurts him most; and, (2) eye-catchingly articulates the central values and objectives of the about 60 percent of the public that views the current administration's actions with slack-jawed horror and fear.

The American people have had a belly full of new ideas in the last year. The next winning politician and party will only have to offer two "new ideas": Stop it now! (and) Start rolling it back immediately! It may take decades just to execute those two new ideas.

Almost everything that is disturbing Americans about the current administration, domestically, can be found in one of the most shocking documents ever issued by the U.S. government -- last week's 2011 federal budget. It not only shocked America, it even shocked the New York Times, which led, top right above the fold with David Sanger's spot-on analysis piece headlined: "Deficits May Alter U.S. Politics and Global Power."

"In a federal budget filled with mind-boggling statistics, two numbers stand out as particularly stunning, for the way they may change American politics and American power. "The first is the projected deficit in the coming year, nearly 11 percent of the country's entire economic output. ...

"But the second number, buried deeper in the budget's projections, is the one that really commands attention: By President Obama's own optimistic projections, American deficits will not return to what are widely considered sustainable levels over the next 10 years. In fact, in 2019 and 2020 -- years after Mr. Obama has left the political scene, even if he serves two terms -- they start rising again sharply, to more than 5 percent of gross domestic product. His budget draws a picture of a nation that like many American homeowners simply cannot get above water."

The truly shocking part of the budget is what was left out: a road map out of the economic calamity.

We have faced hard times before, but, with the possible exception of Jimmy Carter's "malaise" speech, never before has a president, essentially, thrown up his hands and not even offered a plan for how to fix a problem.

And yet, the 2011 budget proposes a budget that if carried out to the letter would assure "unsustainable deficits" (above 3 percent of GDP) forever. By unsustainable, economists mean that we would get steadily poorer as a country. Think of Spain in the 1700s -- the richest country in the world then has steadily gotten poorer for the last 300 years -- and counting.

Americans rightly believe that we can build anything that needs building and fix anything that is broken. And, that we can do that by living out our nation's founding principles and values: constitutional government, respect for private property and life, a free market -- and the gumption of hard-working, inventive Americans.

As an early foot soldier for Ronald Reagan (starting in his 1966 California primary campaign for governor against San Francisco Mayor George Christopher), I well remember with what bemused scorn the political establishment of both parties held for Mr. Reagan. Then moderate state Assemblyman Caspar Weinberger told the New York Times that "Christopher will do much better than Rockefeller did. Reagan will get the great bulk of the Goldwater support, but it does not represent much more than one-third of the party."

In the general election in which Reagan overwhelmed incumbent Democrat Pat Brown, years later Mr. Brown reminisced: "We thought the notion was absurd and rubbed our hands in gleeful anticipation of beating this politically inexperienced, right-wing extremist and aging actor."

Reagan was the Palin of his time. I am not equating the two yet. She still has much to prove to the public (as Reagan did in 1966).

But the smarty pants who have driven America into the ditch by discarding traditional American values and principles should be cautious in writing off the most effective national advocate for such values precisely at the time that leftist programs have so conspicuously failed and outraged the public.