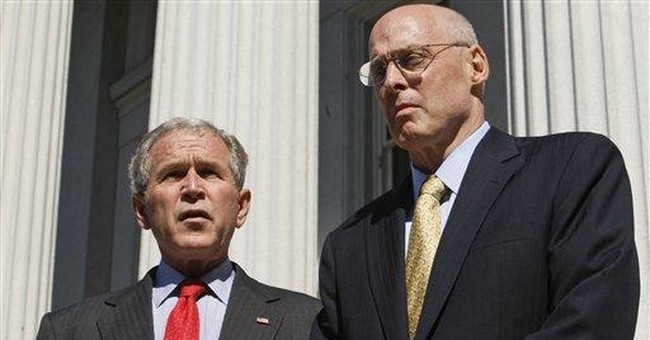 There was a joke going around conservative circles during the mid-1960s that we conservatives were warned that if we voted for Barry Goldwater, America would get deeper into the Vietnam War. The punch line was that we did vote for Goldwater and America did get deeper into Vietnam. (Of course, President Lyndon Johnson had campaigned on that warning, and then it was he who got us deeper in.)

I couldn't help thinking of that old joke Monday. It had been only Friday that members of the House had been warned that if they voted against the $700 billion bailout, the world's stock exchanges would crash. Well, 171 representatives did vote no (though the bill passed anyway), and sure enough, on Monday, from Moscow to London to Paris to Frankfurt to Asia to New York, the markets of the world did crash.

Moreover, by Monday, experts were divided on why the markets were going down and what should be done about it. I was in a hotel room in Santa Fe, N.M., waiting to give a luncheon speech. All morning, I couldn't take my eyes off CNBC's coverage of the worldwide market crashes. What caught my attention (along with the vertiginous market drops taking place) was that the opinions of many of the world's leading financial experts and practitioners ranged between conflicting certainties and admitted bafflement at both causes and solutions.

There were several experts who said the market crashes indicated that the $700 billion bailout was judged insufficient. Many others argued that the market crashes had nothing to do with the bailout but rather were reactions to the increasing evidence of economic contraction around the world. Particular attention was paid by a few experts to the news that China would not be importing any gasoline next month, which they said was evidence that China's economy (and therefore Asia's economy) also would be contracting.

Others pointed to Europe's banks -- which only last week had been predicted loudly by elite Europeans to be safe from financial contagion -- suffering contagion from New York's financial disease.

Experts were equally conflicted over cures. There was a large group of confident-sounding experts asserting that what was needed was an immediate worldwide coordinated interest rate drop of 100 basis points by the central banks of the world. But for each such assertion, there was another confident-sounding expert firmly pointing out that the problem wasn't the price or quantity of money at banks but rather that the banks were sitting on their cash instead of lending it because they didn't trust any borrowers -- including fellow banks.

This pitiable parade of recently powerful personages got me thinking of what it would have been like if there had been a cable medical television network in 1348 to report on the emerging plague that came to be known to history as the Black Death. Early reports in December 1347 would have announced unusual deaths near the docks of Genoa. This would have been attributed (and was at the time) to a recent rain of frogs, serpents, lizards, scorpions and other venomous animals in the lands between Persia and China.

As the plague reached Burgundy in the middle of 1348, the results of a study ordered by the king would have been reported. A commission of University of Paris professors concluded that the catastrophe was caused by the astrological place of Saturn in the house of Jupiter. Medieval experts had long been aware of the dangers that the feared planet Saturn could give rise to when in certain conjunctions.

The cable medical news network's Rhineland correspondent certainly would have reported on the possible success at holding back the plague that the Germans seemed to be having for a while as a result of the urgent intervention of the flagellants -- a group of monks and laymen who believed the plague was the direct result of human sin (see, for comparison, the current explanation by Obama and McCain that greed has caused the financial crisis). The flagellants whipped themselves in public for the public good.

After that was seen to fail, undoubtedly the worldwide viewers of the medieval TV network would have seen in Strasbourg on St. Valentine's Day, Saturday, Jan. 9, 1349, the ritualistic burning to death of 1,884 Jews, who were thought to be causing the plague by poisoning wells. After the burning, the mob would have been seen holding on high the synagogue's ram horn, which carefully was described at the time as the device to secretly signal the enemies of Strasbourg to descend on the city and destroy it.

Notwithstanding the best efforts of the most trusted experts at the time, one-third of European humanity was killed by the Black Death. An old order was destroyed. Because of the premature occupation of those millions of graves, the increased value of surviving labor began the birth of the modern world. And 660 year later, experts still are debating whether it was fleas on rats, anthrax, some form of mad cow disease or some other phenomenon that caused those terrible days of tribulation.