Tom Tradup
|
Posted: Feb 08, 2021 12:01 AM
Share   Tweet
The opinions expressed by columnists are their own and do not necessarily represent the views of Townhall.com. 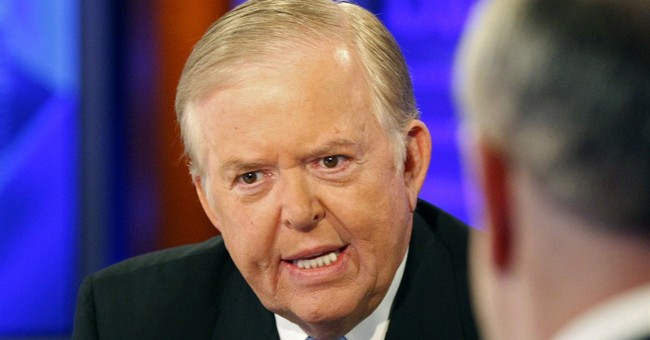 “The rumors of my death have been greatly exaggerated.”

Although he never actually uttered those precise words, that quote often attributed to Mark Twain sprang to mind as I watched snarling Tazmanian Devils in broadcast and print media rejoicing over Friday’s abrupt cancellation of Lou Dobbs Tonight by the FOX Business Network.

Braying hyenas like media critic Brian Stelter at CNN could hardly contain their glee. “Dobbs is going away,” Stelter declared, adding: “I think he was partly dismissed just ‘cause management had had enough of him. They were tired of his BS.” (Apparently viewers don’t share Stelter’s view, since they consistently made Lou Dobbs Tonight the #1 business program anywhere on American television.)

The Arizona Republic newspaper advised: “Don’t look a gift horse in the mouth, as the saying goes. This is long overdue. Dobbs was not just an apologist for Donald Trump. Never one to let the truth or integrity get in the way of a good Trump defense, Dobbs was also a kind of comrade in arms, reportedly influencing policy with the former president.”

Not to be outdone, onetime actor Mark ‘Luke Skywalker’ Hamill Tweeted: “None of us will ever forget where we were or what we were doing at the exact moment we heard ‘Lou Dobbs Tonight’ was cancelled” followed by 17 dopey smiley-face emojis and 17 thumbs-up signs. Pathological. Imagine the hatred of people being glad a show they likely never watched is canceled. (Oh, and whazzup with the twin 17 Emojis? If it’s because Q is the 17th letter of the alphabet and Skywalker was trying to make some smarmy Qanon smear, it didn’t work. Two 17’s = 34…which apparently is the average IQ of most Hollywood actors who want to cancel anyone they disagree with.)

Of course, Lou Dobbs himself—award-winning broadcast legend, bestselling author, and 100% American patriot—has seen this all before.

He was pronounced “dead” by critics and political opponents when he resigned from CNN in April 1999; only a month later he launched a new website, www.Space.com, devoted to all things astronautical. Dobbs became CEO and Neil Armstrong—the first man to walk on the moon and, unlike Mark Hamill, an actual outer space hero—was on his board of directors. Like most things graced with Lou’s Midas touch, Space.com is a success and this July will celebrate its 22nd Anniversary.

Critics panned Space.com and Dobbs…much as current (but I predict soon to be “former”) White House press secretary Jen Psaki mocked our newest U.S. military branch, President Trump’s Space Force last week. But as noted, Space.com has outlived most of its now forgotten detractors. Chalk up another success for Lou Dobbs.

In 2001, he returned to CNN where he began another successful run featuring his unique blend of financial expertise (Lou is a Harvard graduate and gathered real-world government experience working for anti-poverty programs in Washington, D.C. and Boston) and politics. Ratings soared as did controversy, as “the usual suspects” like Media Matters and the now laughable Southern Poverty Law Center ginned-up early stirrings of the Cancel Culture by promoting “Drop Dobbs” efforts because of his hard-line stance against illegal immigration. In November 2009, Lou departed CNN. Again. And—you know the drill—editorial writers and activists declared Dobbs “dead.”

But this cat has nine lives and became the cornerstone of FOX Business Network when the network was launched in 2010. Both he and the new network saw ongoing, successful growth until last Friday...which is where we came in.

Let the Mark Cubans and Ali Velshis cackle at Dobbs' departure (MSNBC’s Velshi flatly declared on Friday this was “the consequences of lying for Donald Trump”) but everyone else wants to know what’s next for the George Foster Peabody and Emmy-award winning broadcaster.

For now, his sole electronic media outlet will be the Salem Radio Network. Full Disclosure: I am not a disinterested party here, since I produce his three-times-daily Lou Dobbs Financial Reports on SRN and consider him to be a great American and a loyal, personal friend. But beyond that, his detractors are substantially outweighed by his fans.

Included among that legion of supporters is the 45th president of the United States.  Donald Trump minced no words over the weekend, issuing this statement: "Lou Dobbs is and was great. Nobody loves America more than Lou. He had a large and loyal following that will be watching closely for his next move, and that following includes me."

I suspect he’ll also be writing more. In his 2020 bestseller, The Trump Century, Lou sounded a prophetic warning about the now out-of-control Big Tech: “Google, Facebook, and Twitter wield…formidable assets that make them all but impervious to any real competitive challenge.” Had America heeded Dobbs’ warning, we might have headed off Big Tech’s unfettered crushing and muzzling of any conservative viewpoints they don’t want you to see.

So pay no attention to those obituary writers beyond the curtain. As usual, they’re like buzzards circling over the pallbearers in Edgar Allan Poe’s The Premature Burial.

Whenever America is in danger—and this week’s absurd second impeachment trial of Donald Trump is a perfect example—it’s time to turn on the Bat Signal, and my guess is it won’t be long before we hear much more from Lou Dobbs who always is standing ready to roll up his sleeves and help Make America Great Again.

Tom Tradup is V.P./News & Talk Programming for Dallas-based Salem Radio Network. He can be reached at ttradup@srnradio.com