In Praise of Mike Lindell

Tom Tradup
|
Posted: Jan 25, 2021 12:01 AM
Share   Tweet
The opinions expressed by columnists are their own and do not necessarily represent the views of Townhall.com. 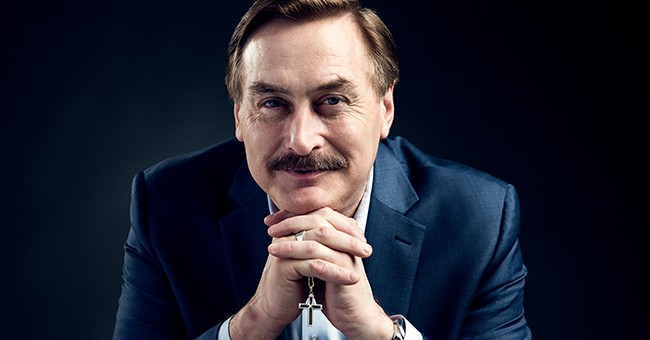 My wife Lori and I spent part of our rainy weekend rewatching the awesome Hugh Jackman film The Greatest Showman, his musical tribute to the master entrepreneur and entertainer P.T. Barnum.

Taking nothing away from Jackman’s show-stopping performance (or the fact the movie glosses over many of the controversial details of P.T.’s real-life past) Barnum paled in comparison to Mike Lindell, best-known from his wild TV commercials as the ubiquitous inventor of My Pillow.

But Lindell is far more than just a showman and an entertainer. He’s a job creator, a philanthropist, a true American patriot, and a living example of how God can redeem anyone. Don’t believe me? Just read his stunningly candid autobiography, What are the Odds: From Crack Addict to CEO, which reveals Lindell’s business failures, drug addiction, and how God’s grace turned his life around and ultimately placed him side-by-side with the 45th president of the United States.

Thousands of men and women all over America are employed thanks to Mike Lindell; whether at the factory he built in Chaska, Minnesota, or the hundreds of retailers and delivery services like UPS, which carried his popular pillows, bed sheets and other 100% American-made products. By contrast, how many private-sector jobs has either Chuck Schumer or Nancy Pelosi ever created through actual sweat struggling to meet a payroll? (Insert laugh track here.)

And speaking of Pelosi, Schumer and now Lunchpail Joe Biden from Scranton, who is fond of ending every public appearance with the words, "and may God protect our troops” (assuming your idea of protecting our troops is forcing hundreds of National Guardsmen out of the U.S. Capitol this week so they could sleep in the nearby Thurgood Marshall parking garage in 40-degree temperatures), which of those three alleged leaders used their personal funds to give people real hope by creating anything like the Lindell Recovery Network™, a revolutionary platform which sets people free from addiction once and for all? Mike did that. Biden, Pelosi and Schumer were—and remain—AWOL.

Of course, by supporting President Donald J. Trump over the past four years—including campaigning for him at over 60 rallies and serving as Trump’s Minnesota state re-election chairman—Lindell is now vilified by jackals in the media and politics. Hollow-heads in Congress have attacked him for even appearing at President Trump’s rally on January 6thto (gasp!) verify that Electoral Votes were won fairly in the 2020 election. Spineless retailers like Kohl’s, Wayfair and Bed Bath & Beyond have dropped My Pillow products from their stores, hilariously citing “declining sales” at a time when My Pillow execs in Minnesota can’t ship orders out quickly enough.

And then there are marginally-talented jokester, like Jimmy Kimmel on ABC who Tweeted on January 20th, “Today we showed the world that there is no MyPillow large enough to smother our democracy.” Yup. We aren’t even one week into the Biden Presidency, and already Lunchpail Joe has killed the Keystone XL pipeline (enjoy paying more to heat your homes); Biden's pick for Transportation secretary, Pete Buttigieg, has floated the looney concept of raising revenue by taxing drivers based on vehicle miles traveled; Democrats are racing over the cliff on yet another impeachment trial (this time for a president who has already left office); and Administration virus guru—back again like a bad penny—Anthony Fauci is suggesting the China Virus won’t see any semblance of abating until sometime in 2022. But in Jimmy Kimmel’s doofus comedy world, it’s My Pillow that wants to “smother” democracy.

Despite all of the above, Mike Lindell is unbowed and standing tall. He graciously (unlike cheap shot artists like Kimmel) refused to attack stores that dropped his products, adding, "These guys, they’re scared, like a Bed Bath & Beyond, they’re scared. They were good partners. In fact, I told them, ‘You guys come back anytime you want.'" Classy.

And those agenda-driven smear merchants—The Associated Press—attacked Lindell over the past weekend trying to sabotage talk about a possible Mike Lindell For Governor campaign in Minnesota, suggesting the idea is “a prospect that sends shivers down the spines of some Republicans in the state.” Helpful consumer tip for Republicans: when the AP—the de facto rubber stamp for the DNC and other liberal nutters—warns a guy will “send shivers” down the spine of Republicans, that’s somebody you probably want to back financially. A larger-than-life business success who helps people by giving away much of his personal fortune and inspires others along the way.

Near the end of The Greatest Showman, New York Herald theater critic James Gordon Bennett sarcastically suggests that P.T. Barnum is trying to pass himself off as “a philanthropist.” To which Barnum replies, “Well, hyperbole isn't the worst crime. Men suffer more from imagining too little than too much."

Tom Tradup is V.P./News & Talk Programming for Dallas-based Salem Radio Network.  He can be reached atttradup@srnradio.com