President of What World? 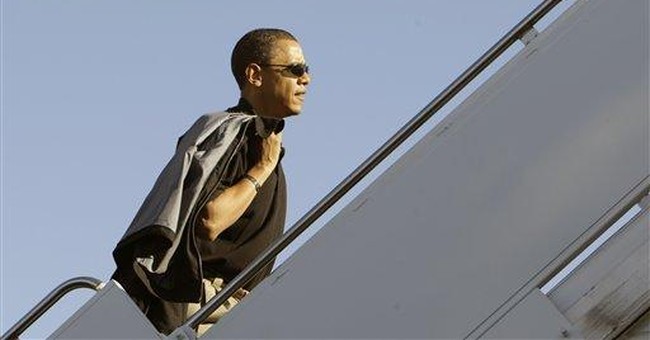 Senator Obama went to Berlin and told a crowd of 200,000 Europeans that he was speaking to them not as a candidate for President of the United States, but as “a fellow citizen of the world.” He then proceeded to insult the memories of any German over age 30 and the intelligence of every American who remembers what the Berlin Wall was all about.

In Berlin, Obama credited the “people of the world” for bringing down the Berlin Wall.  That will be surprising news to the people of Mexico, Switzerland and dozens of other nations who not only sat out World War II as "neutrals" but never gave one penny to support the 1949 Berlin Airlift or NATO. Contrary to Obama’s rosy Code Pink revisionism, the “people of the world” were bit players in the 40 year struggle against Soviet occupation of East Berlin and Eastern Europe.

But Obama's misunderstanding of the Cold War is not the root of his effusive one-world utopianism. Obama is an American by birth and a multicultural globalist by choice. He finds it hard to praise the United States for any achievement without mentioning some sin or grave shortcoming for balance.

Obama's leftist tilt toward moral equivalence is troublesome enough in a United States Senator, but as the guiding principle of U.S. foreign policy it would be catastrophic. Obama's utopianism leads him to grandiloquent expressions of global ambition.  If we are to take his words seriously, he aspires not only to be President of the United States but also president of the world:

I suspect most Americans are not keen on taking on moral responsibility for all of the world’s poverty, sickness, racial discrimination and religious tensions. President Bush limited his promotion of democratic reforms to Iraq and Afghanistan, countries where America’s vital interests are clearly at stake in the war against jihadist Islam. Obama’s commitment to global meddling knows no such bounds.

Senator Obama wants all the walls of the world broken down because 19 years ago the Berlin Wall came down. To use this metaphor to promote global egalitarianism, he must ignore the brutal character of the Berlin Wall – that it was a wall to keep people inside, not to keep people out. It was not a border dividing "two peoples" or two nations. There were no West Germans or West Berliners trying to get past the wall and into East Germany. Its sole purpose was to imprison East Germans under Soviet control.

Obama hopefully knows all this, but his egalitarian agenda requires that we must first hate all walls and boundaries. The distinctions between citizen and alien is included in his list of barriers to be torn down, which makes sense if our first loyalty is to planet earth, not to that old piece of parchment, the United States Constitution.

Obama’s agenda is not only unabashedly socialist but global in scope, a deadly combination not only for any sensible foreign policy but for the American taxpayer as well. Obama lumps economic inequalities and national identity into the same pot with racism and religious intolerance as things that must be overcome, walls that must be torn down. Franklin Roosevelt’s New Deal and Lyndon Johnson’s War on Poverty aimed at the Dust Bowl and lost jobs, then at Appalachia and Detroit, but for Obama, America must take responsibility for ending poverty, disease and discrimination in all of Africa and Asia. He is also willing to sacrifice our economy to global regulation to lower carbon dioxide levels in Shanghai, Cairo and Budapest.

Probably Israelis and Arabs will not worry much about Obama's utopian dreams, but for Americans, the alarm bells are ringing. The potential mischief embodied in Obama's globalism makes Bush's foreign policy look isolationist by comparison.

Americans under 30 have no memory of the Berlin Wall or the Cold War and thus are not affronted by Obama's misreading of the lessons of 20th Century history. But young Americans who care about the government's growing appetite for dollars taken from their paychecks should ponder whether we can afford to have one of our own as the President of the World.