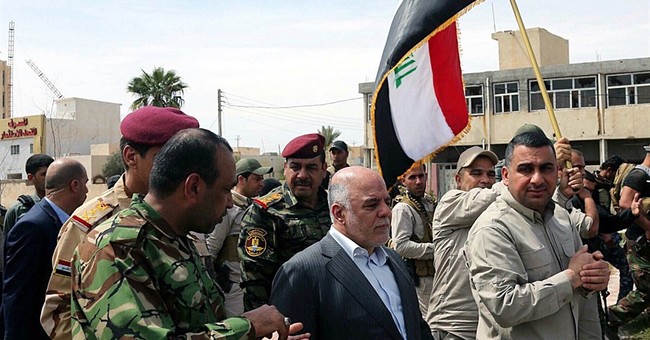 In October 2013, then-Prime Minister of Iraq Nouri al-Maliki visited Washington for the last time before being forced to relinquish his seat in the face of the sectarian violence that his policies helped to inflame. Unfortunately, the Administration had done little to confront those policies at the time, or to challenge Maliki’s close relationship with neighboring Iran.

And now, even as the U.S. negotiates a nuclear treaty with Iran, that mullahs expand their military and terrorist presence throughout the region. On Tuesday, Maliki’s successor Haider al-Abadi will go to White House to visit the President. The two are expected to discuss common responses to the problems that Maliki helped to create.

There is good reason to believe that Abadi will be more serious about addressing those issues than Maliki. But most of the underlying causes of the crisis are still there, chief among them the rising power of the Islamic Republic of Iran in Iraq and throughout the region.

A year and a half of intelligence and media reporting on the escalating conflicts have left little doubt about the growing Iranian influence over Baghdad and the Iraqi military. Beyond that, Tehran continues to prop up the Assad regime in Syria, where it is also giving an enduring role to its Lebanese paramilitary, Hezbollah.

In Yemen, Iran-backed Shiite militias have destabilized the country and forced the president to flee. Overall, Iranian meddling is threatening to give even broader dimensions to the sectarian conflicts raging across the Middle East.

Sadly, for several years Tehran has had more influence in Baghdad than Washington. It is time to redress this imbalance, particularly in light of America's commitment of blood and treasure to that country.

There were early warning signs that should have led US policymakers to question their regional policy. Just a month before Maliki’s visit, 52 members of the main Iranian opposition were killed by Iraqi forces at the exile community of Camp Ashraf. The residents had been guaranteed protection by US forces after the 2003 Iraq War and by the Iraqi government when the U.S. withdrew. Tragically the Malaki government acting with the encouragement and support of Iran repeatedly violated their agreement.

Today, about 3,000 former residents of Ashraf have been moved to Camp Liberty in Baghdad, where they have been subject to repeated attacks, a constant reminder of both Tehran’s influence over the Iraqi military and security apparatus, and the American abdication of important responsibilities to the people of that country.

Already 24 Camp Liberty residents have died because they were prevented from getting timely access to needed medical care and 1,300 are still coping with injuries from past attacks. Another resident, Safar Zakery, has been taken hostage since mid-March under the pretext of being involved in a car accident.

Ignoring these human rights violations just encourages the Iranians to sustain their physical and psychological pressure against the Camp Liberty residents as long as Bagdad ignores it. Iran-backed Shiite militias in Iraq are also flaming the fans of sectarian strife. Such concerns should be raised on April 14 by President Obama, who ought to make it clear to Prime Minister Abadi that Washington will not collude or cooperate with Tehran, and that Baghdad should not either.

Abadi’s visit is a crucial opportunity for the President to reaffirm the obligation that the U.S., the UN and Iraq made to the residents.

It is not too late for the U.S. to join its Arab allies in simultaneously standing up against ISIL and its Shiite counterpart ruling in Tehran. Hopefully, such a strategy is the explicit focus of the meeting between Abadi and President Obama. It is absolutely imperative that the Administration use this opportunity to forge a stronger relationship with the new Iraq government and in doing so restore our credibility in the region, refocus our efforts to reduce Iranian influence throughout the region, and recommit both governments to the safety and security of the residents of Camp Liberty.

This critical meeting can serve to rebuild a partnership between a responsible United States and an autonomous Iraq, it will be a long-delayed step in the direction of a prudent and realistic Middle East policy that truly promotes peace and stability.