Tom Purcell
|
Posted: Mar 17, 2018 12:01 AM
Share   Tweet
The opinions expressed by columnists are their own and do not necessarily represent the views of Townhall.com. 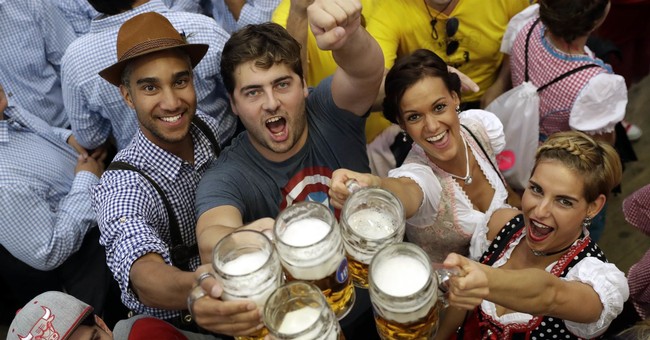 It's always grand in March of every year to pour myself a pint of Guinness and enjoy the glorious Irish wit.

It's my good fortune to be a fellow of Irish descent. I share my good fortune with a quarter of all Americans, who can trace their heritage to the rolling, green hills of Ireland - including my Uncle Mike, rest his soul, whose grandparents came to America from Ireland.

As a lad, I loved the way he and my father celebrated St. Patrick's Day: by swapping the same Irish jokes and witticisms that I've been retelling for years.

Such as the one about a famous Irish dancer who decided to go to confession one Saturday.

Father Sullivan began asking her about her work. She explained that she was an acrobatic dancer, but the priest didn't know what she meant.

She stepped out of the confessional and went into a series of cartwheels, handsprings and backflips.

An elderly woman turned to another parishioner and said: "Look at the penance Father Sullivan is givin' out, and me without 'me' bloomers on!"

Catherine McHugh writes for biography.com that "the Irish indisputably have a way with language, as countless phrases and sayings born on the Emerald Island have been quoted across the world."

She shares some of the most memorable witticisms from famous Irish writers, politicians and entertainers, such as these two lines from the great writer Oscar Wilde:

"Be yourself; everyone else is taken."

"The pure and simple truth is rarely pure and never simple."

Playwright George Bernard Shaw spoke one of my all-time favorites: "A government that robs from Peter to pay Paul can always count on the support of Paul."

He also coined this well-remembered line: "Youth is wasted on the young."

Playwright Sean O'Casey offers a clever take on a famous Shakespeare quote: "The world's a stage and most of us are desperately unrehearsed."

The great satirist Jonathan Swift offers sound advice: "May you live all the days of your life."

And Irish footballer George Best celebrates the Irish wit in all its glory with a line that made me laugh out loud: "In 1969, I gave up women and alcohol. It was the worst 20 minutes of my life."

According to author Bob Callahan in a Salon article, the Irish influence on American culture is considerable.

The melodies of the Irish fiddle were blended with the rhythms of African music to give birth to today's popular music.

But it is the mischievousness of the Irish spirit and wit - the "hard-boiled, darkly humorous, racetrack bitten" language of the Irish - that really benefited America.

We sometimes take ourselves too seriously and lose our sense of humor - we sometimes get lost in the narrowness of our own point of view.

Well, St. Patrick's Day is a great day to pour yourself a pint of Guinness, and to feed and nurture our badly-needed sense of humor - because nothing helps people get along better than a hearty laugh.

Which reminds me of one joke that I am confident we can all agree on:

Q: Why are Irish jokes so simplistic?

A: So Congress can understand them.