Why Kids Need to Sled Alone

Tom Purcell
|
Posted: Jan 19, 2016 10:16 AM
Share   Tweet
The opinions expressed by columnists are their own and do not necessarily represent the views of Townhall.com. 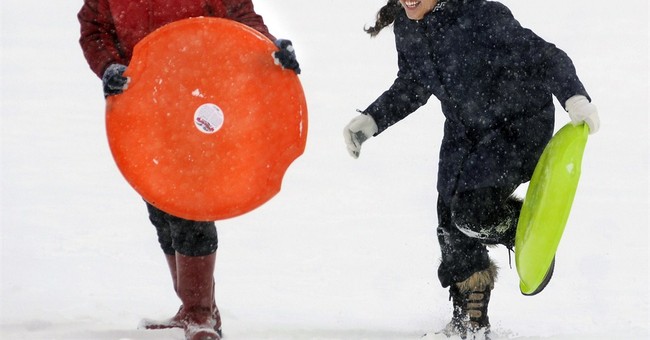 Here's something you don't see in the winter much anymore: unsupervised kids sledding alone.

I drove by a popular sledding spot after it snowed last week. I only saw a handful of younger kids and every one of them had at least one adult keeping a watchful eye over him.

When I was a kid in the 70s, about a million kids hit the sledding slopes every time the snow fell. Unlike today, when you see two or three adults chaperoning every one kid, there wasn't a single adult in sight.

We were left free to experiment and invent. We made jumps and obstacle courses. Sure, about every 20 minutes, a kid would wipe out causing his mittens, ear muffs and boots to fly in every direction, but, man, it was fun.

We made new friends sled riding - I met my best friend that way and we're still good buds four decades later - but we also had to deal with bullies, such as one kid who caused me no small amount of grief.

We had to learn to fend for ourselves, too. One Sunday, after a fast run down the hill, I was picking up my toboggan when a kid rammed his sled into my shins. I went posterior over tin cups, as he laughed heartily in his unusually deep baritone voice.

I spent the rest of that day with vengeance on my mind.

Just after the kid jumped on his sled and took a run, I jumped onto my plastic toboggan just behind him. My goal was to hit him in the shins as he ended his run and got to his feet - but it would require perfect timing and I failed on the first several runs.

As the day wore on, I tried to blend into the background. I shadowed that kid - trying not to reveal my fury as he mowed down one kid after another - looking for the perfect opportunity to strike.

Finally, as the sun began to fall, I saw my chance.

Just as he finished a run and got on his feet, I hit him square in the shins, causing him to go posterior over tin cups.

I could hear the air exit his lungs as his back hit the icy ground. I turned to watch him writhe in pain as my plastic bobsled continued on down the slope.

I laughed the deepest baritone laugh that a normal kid - one who hadn't yet gone through puberty, anyhow - could muster.

What I didn't know then, but know all too well now, is that life is full of bullies. They thrive in the workplace and they prey on people who are too timid to fight back.

I learned at the age of 10 how to deal with bullies - I grew up a little bit more that day because my parents allowed me the freedom to do so.

"When parents provide their kids with more responsibility, kids mature more quickly and I do think that they feel more accomplished," said Richard Gallagher, PhD, an associate professor of child and adolescent psychiatry at NYU in a WebMD article.

They also earn self-esteem on their own.

According to WebMD, "self-esteem comes from attempting something that's a little difficult and either succeeding or failing and trying again until you do succeed."

My self-esteem soared that winter day more than 40 years ago when I knocked that kid posterior over tin cups after he'd done likewise to me.