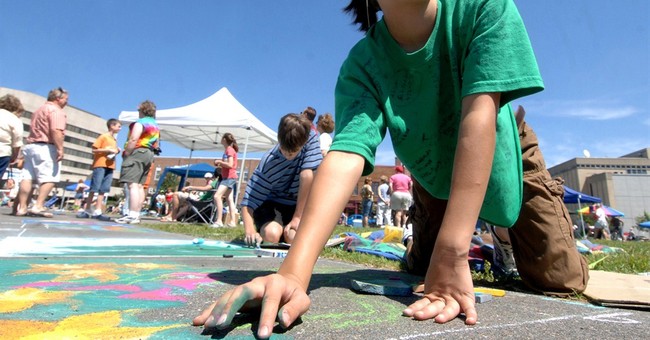 Editor's Note: This is an exclusive excerpt from "An Apple Core, a Toilet: Misadventures of a 1970s Childhood" by Tom Purcell.

Even on the hottest nights of the summer, my father knew how to make our house ice cold.

We lived in a modest two-story home typical of the '60s and '70s -- red brick on the bottom, white aluminum siding on the top. There were four bedrooms upstairs and a master bedroom downstairs (my parent's room, which we added onto the back of our house in 1972).

Only one house in our neighborhood had air conditioning back then. It was locked up tighter than Fort Knox.

I woke every morning to the sound of birds chirping, a dewy chill in the air. I'd hear sausage sizzling in a neighbor's kitchen. A screen door slamming, a car starting, a father lumbering off to work.

The afternoons were quiet -- the older kids went on bike hikes or swimming at the community pool -- but as evening arrived, the sounds came alive again. At dinner time, kids were called home through a variety of shouts, chants, bells and horns. Pork and chicken sizzled on grills. Families ate and talked on back porches.

As darkness fell, a range of new sounds echoed throughout the neighborhood: a dog barking; a motorcycle downshifting on some faraway hill; Bob Prince and Nellie King broadcasting Pirates games on the radio; a baby crying; a couple squabbling...

My father was a master at driving the hot, stale air from our house. He installed an industrial fan in the attic that sucked the hot air upwards and pumped it through a roof vent. Then he put a window fan in the downstairs bedroom to pull cool air inside.

It took him years to perfect his method, but by closing some windows and doors and adjusting others to varying degrees of openness, he tuned our house like a fine violin. He could drive down the temperature 15 degrees or more in a matter of minutes.

I remember coming home on summer nights when I was in college. I'd open the front door and be greeted by a burst of cool air. Sometimes my father would be in the kitchen, leaning on the countertop with his elbows as he ate his favorite snack -- peanut butter crackers and ice-cold milk.

He'd hand me the peanut-butter-smeared knife and I'd smatter a couple of crackers. As we chomped away, we'd mumble through a conversation about college or the Pirates or a variety of other conversations sons had with their dads in the kitchen such nights.

Other times, my father and mother would be lying in bed in the back room, the lights off, the television light flickering as Johnny Carson delivered his monologue, the window fan humming. We'd chat for a spell before I headed up to bed.

I went to the hardware store to buy a window fan recently. I put it in my bedroom window and have been trying different adjustments to maximize the coolness in my place. Its sound transports me to a time and a place that I've been longing for lately.

It reminds me of the constant presence of my father, who spent years tweaking and perfecting the world to make things better for his kids. He was an old-school dad. He lacked skill at articulating his love, so he dedicated himself to showing it.

I know now how profound his presence was. It established order where chaos and emptiness would have been. It permeated every nook and cranny of our home and our lives. It is in me still -- it guides me still.

That's why I shut off the air conditioning most summer nights and run the window fan instead. Its wobbling hum fills me with peacefulness and calm -- and reminds me how blessed I was to have such a dad.