KISS’s Gene Simmons Slammed for Commending the Troops – Why?

Tommy Behnke
|
Posted: May 18, 2019 12:01 AM
Share   Tweet
The opinions expressed by columnists are their own and do not necessarily represent the views of Townhall.com. 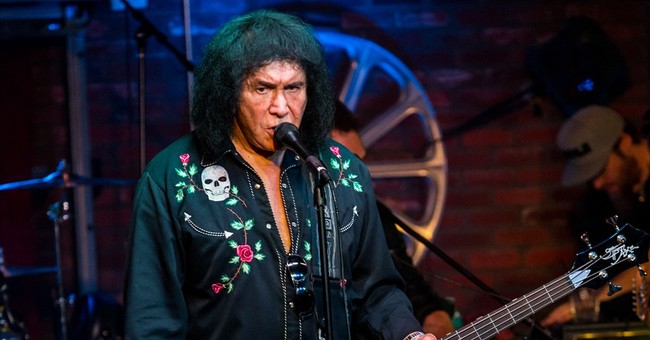 When Elton John testified before Congress, the media had a field day.

When Smokey Robinson made a brief appearance, everyone cheered.

But when Gene Simmons of KISS traveled to the Pentagon on May 16 to laud the troops for their service and fight back tears to discuss how America saved his Hungarian-born mother from the concentration camps, many reporters and pundits scoffed.

Why did the media opt to cast negativity around Simmons’ appearance rather than fawn over it as they would typically do with any other Hollywood star?

Simple: if it wasn’t for the president himself, he could be considered the poster boy for everything that the left hates about the modern-day culture war.

Andrew Breitbart frequently said that politics is downstream from culture. While President Trump deserves credit for popularizing once-forbidden ideas in the political realm, in many respects, Simmons’ KISS can be said to have been the standard-bearer of the first wave of the populist movement that the current president has resuscitated.

Liking KISS – a band that threw away the 3x5” index card of permissible behavior with its flamboyant costumes, hard sound, and powerful theatrics – was not accepted by the establishment. The press expressed its hatred of the band, particularly Simmons, to no end. The music industry brass never gave KISS a single Grammy or comparable award. And yet, in defiance of the elites’ wishes, the band still managed to create one of the most loyal followings – dubbed the KISS Army – in music history.

The reason for Simmons’ success is just as deplorable to many in the mainstream as the popularization of his unusual ideas, and just as comparable to Trump’s: an unapologetically warm embrace of nationalism.

Although the phrase has become taboo in establishment circles, in his speech at the Pentagon, Simmons said, “Don’t be ashamed, don’t hesitate. We need to teach young people to be comfortable saying ‘God Bless America.’” During the height of the Kaepernick controversy, he and his band also brazenly played the National Anthem during its concerts. Simmons did these things not because he knew that they would play well in the media but rather out of overwhelming respect for the country’s capitalist principles that transformed him from a young boy with little food on the table to a rock star with more gold records than, aside from his fellow bandmates, anyone else in the world.

While the politically-correct crowd openly complains about excessive market choice in America, Simmons still fondly recalls his first visit to an American supermarket as a young boy, where he marveled at the hundreds of different brands on the shelves, the array of unique shoes on the shoppers’ feet, and the seemingly unlimited varieties of cars in the store parking lot.

In fact, his appreciation for the free market is what led to his overwhelming success. Before there were Trump hotels, Trump ties, and Trump steaks, Simmons began creating brands of his own, with his band licensing its name to over 3,000 product categories, from KISS cologne to KISS coffins and KISS air guitar strings. To the dismay of many, he has openly said that he has devoted his life to the pursuit of capitalism, going so far as to state that the only reason he is continuing to tour at age 70 is to make more – a far cry from the PC-accepted response that’s expected.

So no, Simmons’ speech at the Pentagon was by no means controversial: he just doesn’t subscribe to the standard Hollywood way of thinking and behaving and was punished for it as a result.

Be it politicians or musicians, public figures are not supposed to create movements behind challenging the status quo and vocally embracing their country and its underlying principles. They are to stay in line or else be rebuked by people of power on every move they make – even when they undertake a gesture as thoughtful and uncontroversial as lauding the troops.