Tom McClusky
|
Posted: Jun 16, 2020 12:01 AM
Share   Tweet
The opinions expressed by columnists are their own and do not necessarily represent the views of Townhall.com. 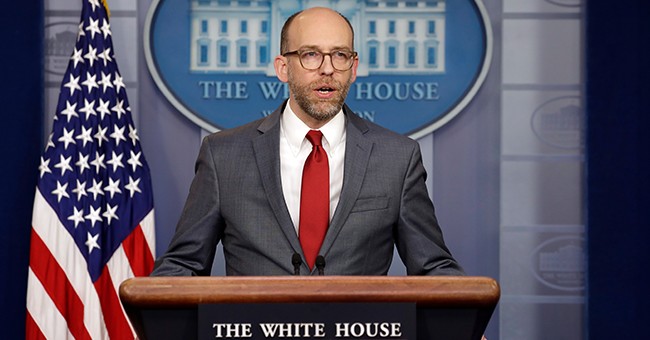 Personnel is policy. For years I have seen this principle play out within administrations. While it is always good for any elected official to hear a variety of opinions, too often staff work to undermine the elected official’s agenda. You can have an outstanding elected official, like a President Ronald Reagan. However, he can be hampered by a staffer who, behind the scenes, goes against his priorities. President George W. Bush was pro-life; but it was because of staff close to him in the White House that things got done.

Because of the importance of personnel, March for Life Action is supporting Russ Vought for Director of the White House Office of Management and Budget (OMB). In his capacity as Acting OMB Director and prior as deputy director, Russ has a proven track record as conservative and pro-life. In his private life as well as in his public roles he has demonstrated that he is not just a supporter of conservative and pro-life causes - but a warrior.

The role of the Director of the OMB is to assist the president in overseeing the preparation of the federal budget and to supervise its administration in Executive Branch agencies. In addition, OMB oversees and coordinates procurement, financial management, information, and the regulatory policies of a given Administration.

It was the OMB that expanded the policy “Protecting Life in Global Health Assistance (PLGHA),” what was originally known as the “Mexico City Policy.” Under this life-saving policy the United States would no longer undermine the pro-life laws and cultural commitments of other countries by funding non-governmental organizations that obsessively promote and perform abortion overseas, (e.g. Marie Stopes International). Thanks to the OMB, the administration expanded PLGHA to cover all foreign health assistance provided by government agencies including the State Department, U.S. Agency for International Development, the Office of the U.S. Global AIDS Coordinator, and the Department of Defense. Expansion of this important policy to include $8.8 billion in foreign aid builds on the Ronald Reagan’s Mexico City Policy and pro-life legacy.

The OMB was also key in enacting much needed conscience protections ensuring that no doctor or nurse would be forced against their conscience to participate in an abortion, assisted suicide, or euthanasia. The OMB was also a driving force for changes to the rules that oversee the Title X Family Planning Program – these rules currently ensure that tax dollars do not subsidize abortion or abortionists.

In both of these examples, Russ Vought has already played a critical role as Acting OMB Director.

When Mr. Vought was before the Senate Budget Committee previously, Sens. Bernie Sanders (D-VT) and Chris Van Hollen (D-MD) attacked him for his Christian beliefs, despite what Article VI of the U.S. Constitution plainly states: “No religious test shall ever be required as a qualification to any office or public trust under the United States.” Sanders and Van Hollen stated they would not support the candidate because of his religious beliefs. Russ’s response stayed in character as an upstanding human being: “As a Christian, I believe that all individuals are made in the image of God and are worthy of dignity and respect, regardless of their religious beliefs. I believe that as a Christian, that’s how I should treat all individuals.”

Treating all people, including the unborn, with dignity and respect is the type of person we want working in government. There will likely be many fiscal challenges over the next few months and years, as well as pro-life opportunities. The next Director of the OMB needs to be someone with a strong record like Russ Vought.