Todd Starnes
|
Posted: Sep 04, 2020 12:35 PM
Share   Tweet
The opinions expressed by columnists are their own and do not necessarily represent the views of Townhall.com. 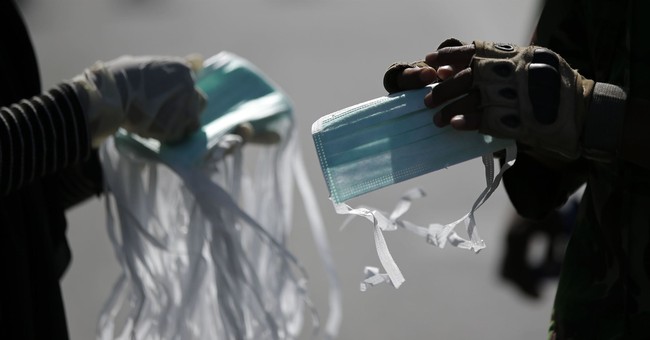 An Air Force veteran quit his job at a North Carolina grocery store after he was told that he could not wear a face mask adorned with the American flag. I was alerted to the story by staffers at "The Talk Station," our radio affiliate in Morehead City.

"Someone complained about me wearing the flag mask," Gary Dean told me during an interview on The Todd Starnes Radio Show.

It's unclear who got their britches in a bunch over Old Glory, but I'd be willing to bet a rack of ribs it was a pajama boy snowflake or one of those Mexican man shoe wearing feminists.

Mr. Dean worked at the Food Lion in Havelock - not too far from the Cherry Point Marine Corps Air Station.

He had been wearing the American flag-themed mask and a "Thin Blue Line" mask since the start of the summer. But then he was pulled aside by the store's manager.

"The manager came up to me and said, 'I’m embarrassed to even tell you this, but someone came up and said you can’t wear it,'" Mr. Dean said.

It was a bit puzzling seeing how Food Lion has a long history of supporting our military personnel. Most stores fly the American flag and they provide special parking for veterans.

Mr. Dean told me the manager was incredibly sympathetic and had nothing but great things to say about his co-workers.

Food Lion provided a statement to News Channel 12, the local ABC News affiliate, stating that all face coverings must adhere to company standards.

"The policy prohibits associates from wearing clothing with writing, insignia or symbols. The dress code is meant to ensure a consistent and professional representation of our associates inside of our stores," the statement read.

Critics have suggested Food Lion's policy is unpatriotic, something the company refutes.

"At Food Lion, we have great respect for the American flag," they wrote. "Like many other organizations, we also have policies that guide the attire and conduct of associates in the workplace."

Regardless, the policy has not gone over very well with local citizens.

And that's why the 69-year-old Air Force veteran decided to turn in his notice.

First the liberals told us that it's unpatriotic not to wear a face mask. And now, they're offended by those of us who wear Old Glory on our faces.

The country has gone slap-crazy, folks.