Todd Starnes
|
Posted: Jun 28, 2017 11:44 AM
Share   Tweet
The opinions expressed by columnists are their own and do not necessarily represent the views of Townhall.com. 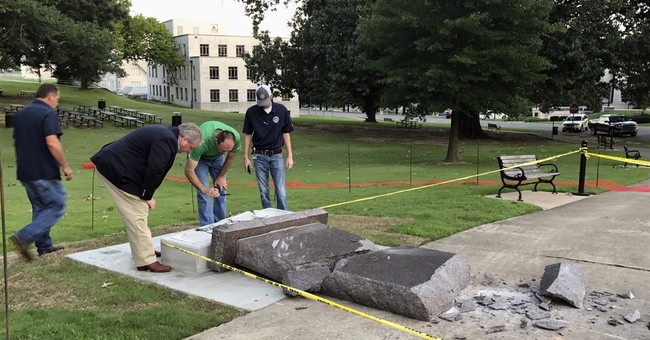 A Ten Commandments monument on the grounds of the Arkansas state capitol has been destroyed less than 24 hours after it was erected.

Police say Michael Tate Reed was taken into custody after he plowed his vehicle into the $26,000 monument – toppling the historical and moral foundation of American law.

Reed was also arrested 2014 in connection with a similar attack on a Ten Commandments monument in Oklahoma.

Reed allegedly posted video of the Little Rock attack on his Facebook page. On the video he yells "freedom" and then rams the monument. Watch the video below.

“This was an act of violence against the people of Arkansas,” State Sen. Jason Rapert told me.

Rapert sponsored the 2015 Arkansas Ten Commandments Act, a law that required the installation of the commandments on the lawn of the capitol building.

The monument was installed on Tuesday.

“The first thought that came to me – who else in the world destroys monuments – is it the same hatred that ISIS uses in the communities that they go into,” he said.

Rapert said he hopes the person responsible for ramming the memorial is punished to the fullest extent of the law.

“When people are so disturbed and they carry out acts of evil – it all comes from the same place – it’s the root of evil,” he said. “You have people taking sticks and bats on college campuses and covering their faces just like Hamas does in the Middle East. In California they tore up a student’s sign – much like the same act of violence that was perpetrated on the Arkansas state capitol grounds.”

Rapert said he is resolved to rebuild the monument and fulfill the law.

“It will be rebuilt,” he said. “”Are we going to maintain our civility with each other or are we going to let these groups that carry out hatred and violent acts intimidate us into submission? I say no,” he told me.

It’s unfortunate that some aggrieved thug destroyed the monument – but it’s not all that surprising when you consider the level of violence and hatred in the public discourse.

“People need to focus on being civil and debating issues rather than thinking they can take the law into their own hands and commit acts of violence against people with whom they disagree,” the senator said. “Our country is better than what we are seeing. We have to settle down and find out who we are as a people.”

Maybe the good people of Arkansas should consider adding an additional commandment: Thou Shalt Not Be a Pinhead.