Todd Starnes
|
Posted: Jan 18, 2017 12:01 AM
Share   Tweet
The opinions expressed by columnists are their own and do not necessarily represent the views of Townhall.com. 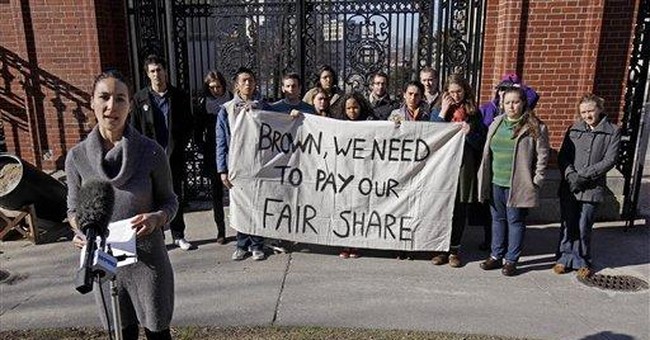 Universities across the fruited plain are trying to convince men to grow lady parts. And that’s a problem, America.

Campus Reform recently reported on efforts to provide “safe spaces” to fight back against what the academic world calls, “toxic masculinity.”

Instead of a country full of manly men, our universities want a nation full of Pajama Boys.

Brown University has a program titled, “Masculinity 101” – for “students who identify as men,” Campus Reform reports.

Get a load of the course description titled, “Unlearning Toxic Masculinity:”

“Men will often resort to violence to resolve conflict because anger is the only emotion that they have been socialized to express. Unfortunately, the way that young men are conditioned to view sex and their need to be dominant and have power over others also contribute to instances of sexual assault and other forms of interpersonal violence on college campuses.”

Could you imagine the Greatest Generation flitting about town after a spa and dishing about their inner-most thoughts with life coaches?

In today’s reengineered version of manhood, guys no longer have friends – they have bromances and they settle disputes by hugging it out.

Men’s magazines are now filled with articles like, “Should a Man Show Nipple?” and “What Men Know about Wearing Eyeliner.” A survey by AskMen.com found that 20 percent of men have no problem wearing makeup.

In my book, “Dispatches From Bitter America,” I pondered these developments.

Can you imagine John Wayne using moisturizer and a concealer stick to hide razor nicks? Would today’s version of "The Godfather" accessorize with Dolche Gabana while settling “family” business with group hugs?

A few years ago I conducted an unscientific poll to determine what the average American woman looks for in a man.

The poll results were not all that surprising. Ladies want a man who loves God and loves his family. They also want a man who, in no particular order:

3. Uses the bathroom standing up;

5. And is willing to carry them out of a burning building.

In other words -- they want the kind of man made in God's image -- not the image of some effeminate intellectual stuffed in skinny jeans sipping chai tea with his pinky finger extended.