Town Renames "Good Friday" for the Sake of "Cultural Sensitivity"

Todd Starnes
|
Posted: Nov 22, 2016 10:49 AM
Share   Tweet
The opinions expressed by columnists are their own and do not necessarily represent the views of Townhall.com. 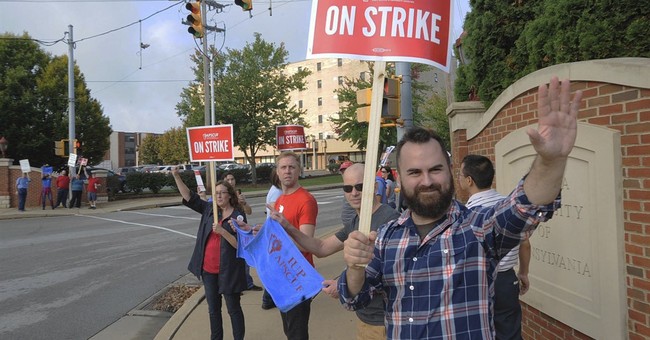 Whenever you hear a liberal talking about cultural diversity and sensitivity it normally means something insensitive is about to happen to Christians.

The latest case in point: Bloomington, Indiana - the home of Indiana University and a nesting place for a gaggle of intolerant liberals.

Click here for a free subscription to Todd's newsletter: a must-read for American Conservatives!

According to our Fox television affiliate -- some folks around town got upset when City Hall posted a closing sign referencing specific holidays.

“As a mayor we are in charge of government. We do not set religious policies, we are not supposed to be part of religion and we are just trying to make sure that our government is open to all people and inclusive,” the mayor told the television station.

And apparently the only way to achieve cultural diversity and sensitivity is by disrespecting Italians and Christians.

"It was not necessary and just stands to divide rather than unite when it comes to Good Friday," the Herald Times wrote in a staff editorial.

The newspaper said a case could be made for changing Columbus Day.

"To some in our country the idea of celebrating him is akin to celebrating a marauding invader who sought to destroy a culture," they wrote.

"It’s a day important to the faith of many in this country," they wrote. "The idea of acting as if city leaders don’t acknowledge its existence and would rather stick a “Spring Holiday” name on it is insensitive to those for whom it means a lot. It’s an unnecessary poke in the eye to many Christians."

Mayor Hamilton may not be aware but Christians commemorate the crucifixion of Jesus Christ on Good Friday. It's about remembering that God so loved the world that He gave His only Son.

Good Friday is a holy day -- not a day to frolick around a maypole in a field of pansies.

And to be honest - I've grown weary of boorish bureaucrats trying to whitewash our faith from the public marketplace all in the name of tolerance and diversity.

They never touch the Muslim holidays, do they? When was the last time you saw a liberal lawmaker launch a crusade to rename Ramadan?

You'd have a better chance of spotting Peter Cottontail hopping down the bunny trail.