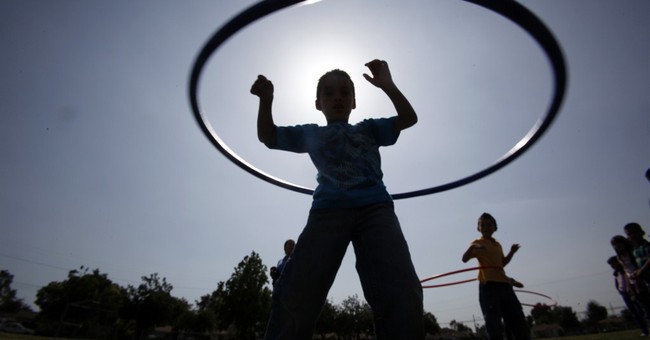 The American Humanist Association (AHA) is about to learn a very important lesson -- folks around Gainesville, Georgia don’t take kindly to out-of-town atheists trying to bully their children.

More than 200 people turned out in defiance of the self-described atheist group early Thursday morning for an impromptu prayer rally in the middle of the Chestatee High School football field.

The previous day, the atheists (acting on behalf of a single, unnamed citizen) sent a letter to school officials demanding that the football coaching staff stop participating in team prayers and that they remove all biblical references and religious messages from team documents.

To best of anyone’s knowledge around Gainesville, no one associated with the football team has a problem with the voluntary prayers. The atheists says that’s beside the point citing the Establishment Clause.

The atheists apparently went undercover to photograph coaches engaged in what they considered to be unseemly and unconstitutional behavior with the teenage football players.

“We have received reports that CHS coaches have joined players in prayer while standing in a circle, hands interlocked,” the atheists breathlessly reported in their letter to the Hall County School District.

Hands interlocked? I can only imagine that atheists across the fruited plain shuddered at such damning evidence.

The atheists also got upset because the team workout schedule included the words “Fortitude 2014, Gal. 6:9” and the cheerleaders wrote a Bible verse on a large banner: “Iron Sharpens Iron, Proverbs 21:17.”

Cleanse the school of religion or prepare to be sued, the atheists warned.

As we say in the Deep South, local residents are preparing to back up and bring it.

“If the atheist group doesn’t like the prayer, tell them to stick their fingers in their ears,” said one caller to radio station WDUN.

Parents of football players also sounded off – lighting up the telephone lines at the popular news radio station.

“I am a mom of two of the football players on the CHS football team and I consider it an honor and a privilege to have my boys on a team that is led by men that believe and trust in God,” one caller said. “I think it's a shame for one person to try and take that away from them.”

The American Humanist Association said the coaches are using their positions to promote Christianity and they said it appears that such religious activity is not an isolated incident.

“The liberal atheist interest groups trying to bully Chestatee High School kids say they have a reason to believe that expressions of religious freedom are ‘not an isolated event’ in Northeast Georgia,” Collins wrote in a statement. “They’re right. In Hall County and throughout Georgia’s 9th district, we understand and respect the Constitution and cherish our right to worship in our own way.”

And it was not lost on the Collins that while the American atheists are picking on high school kids, Christians in Iraq are facing unspeakable atrocities.

“It’s utterly disgusting that while innocent lives are being lost in Iraq and other places at the hands of radical religious terrorists, a bunch of Washington lawyers are finding the time to pick on kids in Northeast Georgia,” he said.

I suspect that the atheists truly believe that Christian football coaches who pray with there are religious extremists.

Supt. Will Schofield told WDUN they would investigate the claims of the atheists .

“We need to be very careful, very deliberate and do this in a very defendable manner,” the superintendent said. “There was an awful lot in that letter that I don’t think has any legal basis. There are some things we do need to look at so we are sure we are doing things the right way.”

In other words, the superintendent was not intimidated by the seven-page threat he received from the AHA. I say, good for him.

Finally! A public school official with a backbone!

Hiram Sasser, of the Liberty Institute law firm, told me the atheists don’t have a prayer.

“Don’t these people have more important issues to pursue than going on a witch hunt for anything that is remotely religious?” he asked. “Teachers and coaches who are not on contract time and in their individual roles as citizens may in fact pray with students after school.”

As I write in my book, “God Less America,” religious liberty is under attack in America. And unless people of faith stand up, liberty will be lost.

“I want the football players and all the students at CHS to know that I support you, I’m here for you, and yes, I’m praying for you,” Rep. Collins said.

Well said, congressman. And I believe they also have the prayers of Christians across the nation.