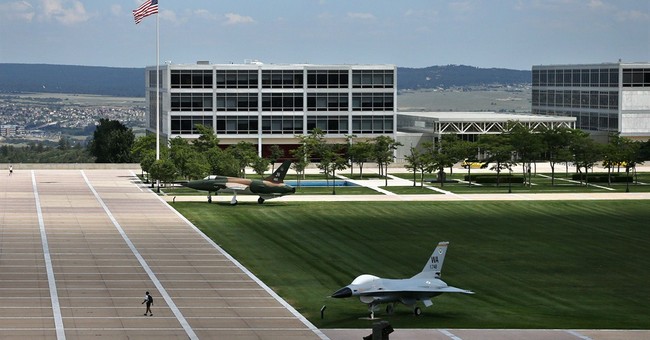 The Air Force Academy removed a Bible verse posted on a cadet's whiteboard after it determined the posting had offended other cadets, a spokesman for the academy said.

The cadet wrote the passage on the whiteboard posted outside his room. "I have been crucified with Christ therefore I no longer live, but Christ lives in me," the verse from Galatians read.

Mikey Weinstein, director of the Military Religious Freedom Foundation, told me 29 cadets and four faculty and staff members contacted his organization to complain about the Christian passage.

"Had it been in his room - not a problem," Weinstein told me. "It's not about the belief. It's about the time, the place and the manner."

He said the Bible verse on the cadet's personal whiteboard created a hostile environment at the academy.

Who knew that a Bible verse posted on a whiteboard could generate such outrage?

Weinstein said he immediately contacted the Air Force Academy and filed a complaint. Exactly two hours and nine minutes later, the Bible verse had been scrubbed from the cadet's whiteboard.

A spokesman for the AFA confirmed that the religious text was cleansed from the board.

"The whiteboards are for both official and personal use, but when a concern was raised we addressed it and the comment was taken down," Lt. Col. Brus Vidal told me in a written statement."

Weinstein told me the Air Force Academy did a good job in fixing the problem and credited Lt. Col. Denise Cooper.

"She immediately said this is wrong and will use it as a teachable moment," he said.

The academy said the cadet will not be punished.

"We don't see misconduct here but the division between your personal room and the hallway is a gray area," Vidal said.

Weinstein took umbrage with that comment and said the cadet must be punished.

"It's not a gray area, this is absolute misconduct," he said. "Not only should the cadet be punished but (also) his/her responsible USAFA cadet and officer chain of command who ignored this blatant and egregious violation of Air Force regulation 1-1 and the United States Constitution."

The 1-1 regulation Weinstein cited is an extensive document with a section on religious proselytizing and other religious matters.

Retired General Jerry Boykin, executive vice president of the Family Research Council told me he was outraged by the removal of the Bible verse.

"Once the academy allowed cadets to use these whiteboards for their personal use, censorship of religious commentary is unacceptable," Boykin told me. "Either the Air Force Academy is very confused about the Constitution of the United States or they don't really believe in the liberties that are provided by that document."

Boykin said the academy needs to take a few moments for some personal reflection.

"In essence, what they are doing is preparing young men and women to defend the Constitution while at the same time depriving these cadets of their own constitutional liberties," he charged.

Michael Berry, an attorney with Liberty Institute, told me it appears the Air Force Academy's decision is in violation of a new Pentagon regulation meant to protect religious liberty.

"If the cadet didn't violate any rules, then why was the quote removed?" Berry asked. "It appears that the Air Force now believes Bible verses are now a violation of AFI 1-1."

Berry said Liberty Institute, which specializes in religious liberty cases, stands ready to defend any cadet whose religious rights have been violated.