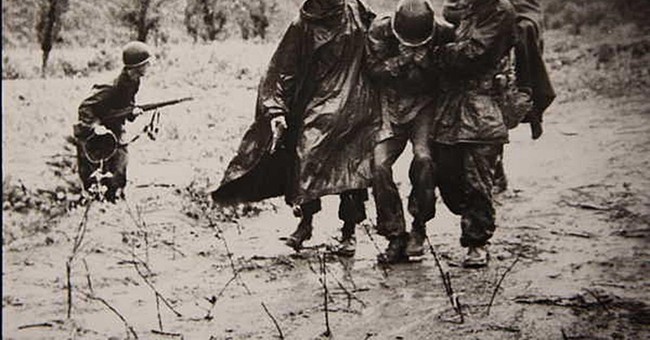 A chaplain at Joint Base Elmendorf-Richardson in Alaska was ordered to remove a religious column he had written titled, “No Atheists in Foxholes: Chaplains Gave all in World War II,” because it allegedly offended atheists serving on the Air Force base.

Lt. Col. Kenneth Reyes confirmed to Fox News that he wrote the original essay that appeared in his “Chaplain’s Corner” column on the base website.

Reyes recounted the origin of the phrase “There is no such thing as an atheist in a foxhole.” Father William Cummings has largely been credited with uttering the phrase in Bataan during World War II.

President Eisenhower referenced the phrase during a speech to the American Legion in 1954, noting “I am delighted that our veterans are sponsoring a movement to increase our awareness of God in our daily lives. In battle, they learned a great truth that there are no atheists in the foxholes.”

Reyes ended his essay with a reflection on faith.

“Everyone expresses some form of faith every day, whether it is religious or secular,” he wrote. “Some express faith by believing when they get up in the morning they will arrive at work in one piece, thankful they have been given another opportunity to enjoy the majesty of the day, or express relief the doctor’s results were negative.”

Reyes did not attack or insult atheists or non-believers in his column.

However, the Military Religious Freedom Foundation accused Reyes of going on an “anti-secular diatribe” and publicly denigrating “those without religion.”

They fired off a letter to the Air Force base allegedly on behalf of 42 anonymous airmen who allegedly complained.

“In the civilian world, such anti-secular diatribe is protected free speech,” wrote MRFF’s Blake Page in a letter to Col. Brian Duffy, the base commander. “Beyond his most obvious failure in upholding regulations through redundant use of the bigoted, religious supremacist phrase, ‘no atheists in foxholes,’ he defiles the dignity of service members by telling them that regardless of their personally held philosophical beliefs they must have faith.”

The Air Force agreed and approximately five hours after the MRFF complained, they removed the chaplain’s essay.

“While certainly not intended to offend, the article has been removed from our website,” Col. Duffy wrote in an email to the MRFF. “We remain mindful of the governing instructions on this matter and will work to avoid recurrence.”

But that’s not good enough for the Military Religious Freedom Foundation. They want the chaplain punished for what he wrote.

“Faith based hate, is hate all the same,” Page wrote. “Lt. Col. Reyes must be appropriately reprimanded.”

Duffy did not respond to an email requesting information on the specific Air Force policies that the chaplain's essay violated. Ironically, the Air Force left six complaints about the essay on their website.

Ron Crews, the executive director ofChaplain Alliance for Religious Liberty, told Fox News the chaplain was well within his duties to write an article about faith.

“To say ‘everyone has faith’ is correct,” Crews said. “For Weinstein to say, ‘I do not have faith’ must mean he has never flown because to step in an airplane is to have faith in a pilot’s ability and faith that mechanics have properly maintained the plane.”

Crews said the incident is yet another example of chaplains facing attacks for expressing their religious beliefs.

“Chaplains have religious liberty as well to speak to issues,” he told Fox News. “Mr. Weinstein appears to want to silence any speech of faith in the military. It is a sad day for the Air Force and for our country when officers obey every command from Weinstein to silence even chaplains from talking about their faith.”

Following is the column that the Air Force censored:

“Chaplain’s Corner: No Atheists in Foxholes: Chaplains Gave All in World War II”

Many have heard the familiar phrase, "There is no such thing as an atheist in a fox hole."

Where did this come from?

Research I verified in an interview with former World War II prisoner of war Roy Bodine (my friend) indicates the phrase has been credited to Father William Cummings.

As the story goes, Father Cummings was a civilian missionary Catholic priest in the Philippines.

The phrase was coined during the Japanese attack at Corregidor.

During the siege, Cummings had noticed non-Catholics were attending his services.

Some he knew were not Catholic, some were not religious and some were even known atheists.

Even the strongest of beliefs can change, and, I may add, can go both ways - people can be drawn to or away from "faith."

With the pending surrender of allied forces to the Japanese, Cummings uttered the famous phrase "There is no such thing as an atheist in a fox hole."

In one of my many discussions with Roy, he distinctly remembered a period on the "Hell Ships" - these were ships the Japanese used to bring POWs from the Philippines back to Japan.

They were unmarked and thus 'fair game' for attacks from the allies from the air and sea.

"When our own planes were attacking us," Roy said, "I remember Father Cummings calming us down by reciting the Lord's Prayer and offering up prayers on our behalf.

For a brief moment I did not hear the yells and screams of dying men as our boat was attacked by our own men."

He went on to say, "There was a peaceful quiet during the attack that I cannot explain nor have experienced since."

Later on during the trip to Japan, Cummings, after giving his food to others who needed it more, succumbed to his own need and died of starvation.

Everyone expresses some form of faith every day, whether it is religious or secular.

Some express faith by believing when they get up in the morning they will arrive at work in one piece, thankful they have been given another opportunity to enjoy the majesty of the day; or express relief the doctor's results were negative.

The real question is, "Is it important to have faith in 'faith' itself or is it more important to ask, 'What is the object of my faith?'"

Roy never affirmed or expressed whether his faith was rooted in religion or not, but for a moment in time on the "Hell Ships," he believed in Cummings' faith.

What is the root or object of your faith?

Is it something you can count on in times of plenty or loss; peace or chaos; joy or sorrow; success or failure?

Is it something you can count on in times of plenty or loss; peace or chaos; joy or sorrow; success or failure?