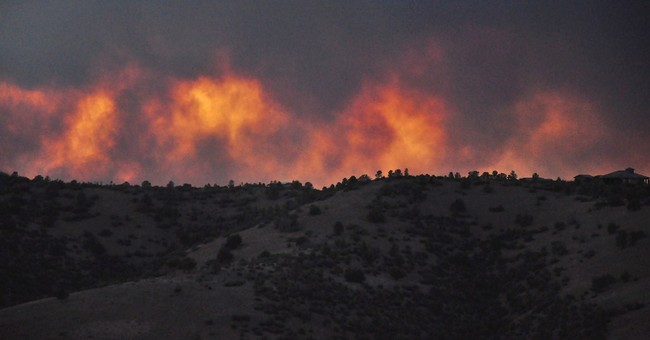 As the sun began to fade behind Pikes Peak, firefighters trudging back to their command post at Pine Creek High School in Colorado Springs, heard a most unusual sound.

“Amazing grace, how sweet the sound…"

“Twas grace that taught my heart to fear…”

The command center was a flurry of activity. Weary firefighters were returning from the front lines – looking for a hot meal. Their replacements were suiting up – fire engines rumbled, sirens wailed. But above the clamor was that most unusual sound.

“Through many dangers, toils and snares…”

Many of the firefighters had been away from their families for days – waging war on the Black Mountain Fire – a blaze that has already killed at least two people, destroyed more than 500 homes and consumed more than 14,000 acres of land. These have been difficult days.

But for a brief moment on Tuesday – a group of young people from more than 1,400 miles away – brought a bit of joy to the Black Mountain Fire command post when they serenaded the firefighters with music.

The 100-voice student choir from the First Baptist Church in Montgomery, Ala. was in Colorado on their summer tour – performing at rescue missions, nursing homes and even at a Colorado Rockies baseball game.

On Tuesday, they had been invited to sing at Focus on the Family headquarters in Colorado Springs. After their performance, a staff member asked if they might consider singing for the firefighters.

The Alabama youngsters were taken aback by what they saw. Local residents stood along the road leading to the command center cheering the firefighters, holding signs that read “We love our firefighters” and “Thank you.”

The group started off singing The Star Spangled Banner and then launched into a 20-minute concert.

Caroline Elliott, 18, told Fox News it was an honor to be able to sing for the firefighters.

“I feel like it was something we had to do,” she said. “It almost felt like we had a duty to pay back to them for all they do for us.”

Chris Colee, another member of the choir said they felt compelled to stay in Colorado Springs.

“These guys are putting it all on the line,” he said, referring to the firefighters. “It was the least we could do – to go out there and sing to the Lord for them.”

After their concert, they were asked to sing for firefighters eating meals in food tents.

“So we took all 100 of our kids and moved from tent to tent to sing for the guys who were eating,” the music minister said. “We were so touched. Here were these guys and ladies – hot, sweaty, exhausted. We just wanted to put a smile on their faces.”

The young choir members said they hope their songs were an encouragement to the community.

“All we’re trying to do is shine the light of the Lord,” Colee said.

The choir is now back on the road – heading towards Wichita where they will sing later tonight – but the music minister believes what happened in Colorado Springs will be a lifetime memory.

Before they left, one firefighter told the young people that she had been away from her family and her church for days.

“She told us that when we started to sing Amazing Grace, she felt like she was back home,” he said.

"When we've been there ten thousand years, bright shining as the sun, we've no less days to sing God's praise, than when we first begun."