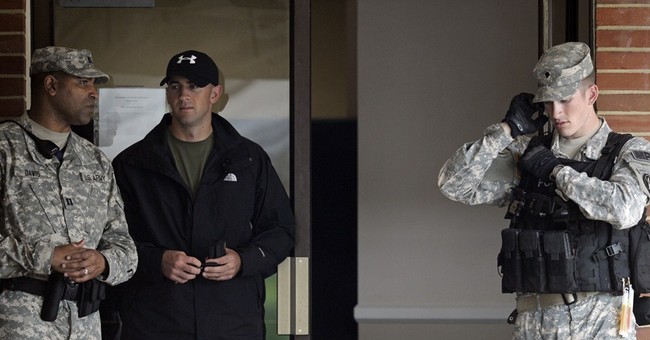 A member of the U.S. Army Band who said he was reprimanded for having anti-Obama bumper stickers on his personal car, serving Chick-fil-A sandwiches at a party and reading books written by conservative authors is now facing Article 15 charges – which cropped up shortly after he went public with his complaints.

Master Sgt. Nathan Sommers, a decorated soloist with the Army Band, is being charged under a federal law that permits commanding officers to conduct non-judicial proceedings for minor offenses.

Sommers is accused of giving a superior officer the wrong date for a doctor’s appointment. He’s also accused of failing to carry out an order. In order to comply with that order, Sommers would have had to disclose private information about his autistic son’s medical records.

The charges were handed down one day after Sommers told Fox News that he was facing discrimination and persecution because of his conservative political and religious beliefs.

“The timing does seem strange,” retired Navy Commander John Bennett Wells told Fox News. “It’s suspicious. No matter what’s happening it looks like a graduated attempt to build a case against him on some really ridiculous charges.

Wells is representing the 25-year veteran who, until last summer, had a spotless record.

The Military District of Washington disputed allegations that Sommers had been reprimanded or disciplined.

“The Soldier is not, and never has been, ‘facing retribution and punishment from the military for having anti-Obama bumper stickers on his car, reading books written by conservative authors like Mark Levin and David Limbaugh, and serving Chick-fil-A sandwiches at his promotion party,’” Public Affairs Director Michelle Roberts told Fox News in a written statement.

However, Wells said that’s simply not true – and he said he’s got official Army documents to support his claims.

”The MDW spokesman was either uninformed or was being disingenuous,” he said. “The counseling form clearly stated that he was being reminded of his limited ability to disagree with the President’s policies and implied that displaying the bumper stickers could lead to prosecution under the Hatch Act.”

He said the counseling form also reprimanded Sommers for tweeting about the Chick-fil-A party.

“The counseling form in itself is firm corroboration of the statements made by MSG Sommers to Fox News,” he said. “It also gives rise to the question of why the Army was data mining a soldier’s private tweets.”

Sommers’ troubles started last year when he was confronted about having pro-Republican and anti-Obama bumper stickers on his personal vehicle.

The stickers read: “Political Dissent is NOT Racism,” “NOBAMA,” NOPE2012” and “The Road to Bankruptcy is Paved with Ass-Fault.” That sticker included the image of a donkey.

His superior officer told the solider that the bumper stickers were creating “unnecessary workplace tension.”

“The types of stickers on your car were creating an atmosphere detrimental to morale and were creating unnecessary workplace tension,” the officer wrote in an Army document obtained by Fox News. “A Soldier must balance their personal feelings with the mission of the U.S. Army. Even the slightest inference of disrespect towards superiors can have a demoralizing effect on the unit.”

Sommers also came under fire for reading the works of Mark Levin, Sean Hannity and David Limbaugh. Last summer he was reading Limbaugh’s “The Great Destroyer” backstage at a concert when a superior officer told him that he was causing “unit disruption” and was offending other soldiers.

“I wasn’t read aloud,” Sommers told Fox News. “I was just reading privately to myself. I was told they were frowning on that and they warned me that I should not be reading literature like that backstage because it was offensive.”

Fox News Channel host Sean Hannity expressed dismay at the book censorship. “What a sad day for American when an American hero can have his personal freedoms ripped away – when that very military he works for is on the frontlines defending those very freedoms for every United States citizen,” Hannity told Fox News. "What's next - book burning? Government approved reading lists? State run media outlets? Can military members read Obama’s books?”

But the incident that led to an official investigation of Sommers came late last summer when he served Chick-fil-A sandwiches at his promotion party.

His promotion coincided with a controversy surrounding Chick-fil-A. The company’s president told a reporter that he was “guilty as charged” when it came to supporting traditional marriage. Gay rights activists pounced- calling for a boycott of the Christian-owned company. And some Democratic officials vowed to block Chick-fil-A from opening restaurants in their cities.

In response to that, Fox News Channel host Mike Huckabee launched a national Chick-fil-A Appreciation Day to rally support for the restaurant chain.

“I was inspired by Gov. Huckabee’s appreciation day,” Sommers told Fox News. “And since I wasn’t able to participate in the event, I decided to serve Chick-fil-A at my promotion party.”

It’s a long-standing tradition within the U.S. Army Band for promoted soldiers to host a party for their fellow troops. So the soldier decided to have Chick-fil-A cater the meal.

“My family likes Chick-fil-A and we like what they stand for,” he said. “I can make a statement and at least express a religious point of view at my promotion party – theoretically without any fear of reprisal.”

The soldier also tweeted about the party: “In honor of DADT repeal, and Obama/Holder’s refusal to enforce DOMA act, I’m serving Chick-fil-A at my MSG promo reception for Army today.”

Both tweets were cited in an official military document.

Sommers said he paid for the party with personal money, not government funds.

He was later summoned by a superior officer, who the soldier said is openly gay, and was told that unidentified individuals were offended by the tweets and some considered them to be racist.

Sommers was reprimanded, threatened with judicial action and given a bad efficiency report. An investigation was also launched.

“It’s an obvious attempt to set him up and force him out of the military,” Wells said. “They recently did an NCO evaluation that effectively torpedoed his chance at promotion and he could be forced out of the Army.”

Attorney Wells believes Sommers is being discriminated against not only because of his Christian faith, but also because of his objections to homosexuality. “There’s no question about it,” Wells told Fox News. “Because he is religious, because he feels that homosexual conduct is wrong for religious reasons, he is basically being persecuted.”

During the course of their investigation, the military unearthed a tweet from 2010 that included a derogatory word for homosexuals. The soldier admitted that he had retweeted someone else’s original tweet.

“Lordy, Lordy, it’s faggot Tuesday. The lefty loons and Obamabots are out in full force,” the retweet read.

The soldier was hauled in to explain himself before a superior officer.

“He explained to me that homosexual Soldiers were now afraid of me,” Sommers said. “He showed me a letter from an Army Band colleague that demanded that I publicly apologize (to) the band for my statements and that I should be removed from positions of leadership and influence.”

Sommers admitted the retweet was a case of bad judgment on his part, but he said he believes that a group of homosexual soldiers are on a witch hunt and they were “attempting to dig up any negative information they could in order to silence me or ruin my career.”

Wells said there are a number of homosexuals serving in the Army Band and he believes they are ganging up on Sommers because of his religious beliefs.

Last Spring Sommers raised concerns after the US Army Chorus had been invited to perform with the Turtle Creek Chorale, one of the nation’s largest gay men’s choruses.

Sommers said he witnessed an “inappropriate sexual advance between one of the members of the chorale” and a member of the US Army Chorus involving a slap on a soldier’s backside.

“The rehearsal also featured sexual innuendo and banter which made me feel particularly uncomfortable, and a situation where a 10-year-old boy, who was asked to sing a solo with the Turtle Creek Chorale, was subjected to inappropriate, lewd behavior from the Chorale in the presence of the Army Chorus,” he said.

“When I was in the military any kind of public display of affection on a military installation would have been discouraged and frowned upon,” Wells said. “Now, it’s blatant. I’m not sure heterosexuals can do that.”