Students Fight Back to Save Ten Commandments 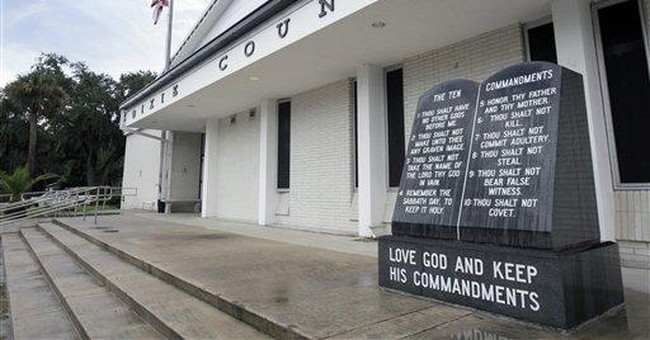 Hundreds of Christians in a small Oklahoma town have decided to draw a line in the sand and fight back against a national association of atheist and agnostics who want displays of the Ten Commandments removed from local schools.

“It’s Christianity under attack within our own country,” said Josh Moore, pastor of the First Baptist Church of Muldrow, Okla. “The irony can’t be missed by anyone who’s lived in this country or grown up in this country.”

The controversy surrounds Ten Commandment plaques are that are posted in a number of classrooms at Muldrow High School. It’s unclear when the plaques were installed.

Ron Flanagan, the superintendent of the local school district, told Fox News they had received a complaint about the Ten Commandments from the Freedom From Religion Foundation – an organization that has a long history of targeting displays of the Christian faith in public schools.

The complaint was allegedly filed by an "anonymous" member of the community. “If the facts are as presented to us, and the Ten Commandments are on display throughout Muldrow Public Schools, the displays must be removed immediately,” wrote FFRF attorney Patrick Elliott, in a letter to the school district.

The FFRF said the displays are a “flagrant violation of the Establishment Clause of the First Amendment. “Any student will view a Ten Commandments display in school as being endorsed by the school,” Elliott wrote. “Muldrow Public Schools promotion of the Judeo-Christian Bible and religion over non-religion impermissibly turns any non-Christian or non-believing student, parent or staff member into an outsider.”

Flanagan would not say whether or not the school district would comply with their demands. He referred all questions to the district’s attorney. The school board will discuss the controversy at a meeting on Monday.

But hundreds of students have decided to stand up and defend the plaques by launching petitions and raising awareness on social networking sites. And lots of folks around town are wondering why a Wisconsin-based organization is concerned about the affairs of Muldrow, Okla.

“It’s a pretty big deal,” student Chase Howard told television station KHOG. “One person kind of put it out there on Twitter. A couple of us hash tagged it and asked people to get it trending. After that it just caught on.”

Benjamin Hill, 18, is one of the students who signed the petition. He said he understands why non-Christians might be upset over the display, but he said students should have the right to express their faith.

“It’s not to protest or to be ugly,” he said. “Legally, they do have First Amendment rights. They can voice what they believe in. We are encouraging them to do that in a way that is respectful of others.”

Parent Denise Armer told KHOG she supports the students’ efforts to save the Ten Commandment plaques.

“If other kids don’t want to read the Ten Commandments, then they don’t have to,” she said. “But that doesn’t mean that they have to make everyone else do what they want.”

Pastor Moore said it’s not surprising that the Christian faith is coming under such a fierce attack.

“It’s promised in Scripture,” he said. “As believers and followers, it’s a matter of recognizing that and responding in an appropriate manner.”

“It’s tough for them,” Moore told Fox News. “Their hands are tied from a legal perspective. We’re supporting them and ministering to them. We don’t want to alienate their or throw them under the bus.”