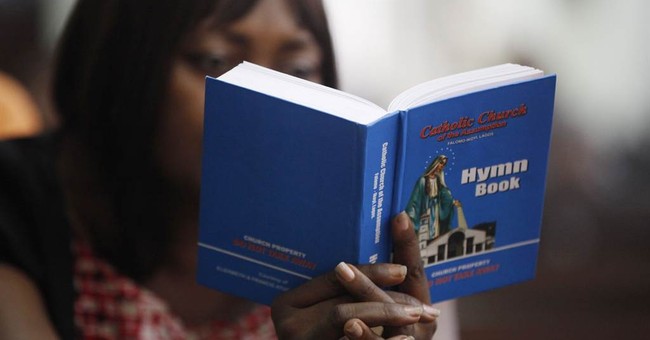 A Georgia school district will no longer allow prayers or songs with religious references at graduation ceremonies after a Wisconsin group threatened to file a lawsuit and suggested that forcing non-Christian students to listen to religious music was a form of bullying.

“If the valedictorians want to thank their parents, grandparents and god, that’s freedom of speech,” Houston County Superintendent Robin Hines told the Macon Telegraph. “We can’t stop that. As long as it’s not lewd, they can say whatever they want.”

The Freedom From Religion Foundation sent the school district a letter complaining that last year’s graduation ceremony included prayers and a musical performance of a song written by a Christian artist.

“It is wholly inappropriate for Christian worship songs to be performed in a public school setting or at public school events,” wrote FFRF attorney Andrew Seidel. “There are a multitude of secular songs that would be appropriate.”

The FFRF took offense to “Find Your Wings,” a song written by well-known Christian artist Mark Harris, arguing that it was a blatantly religious song that “belongs in a church, not a public school event.”

“I pray that God would fill your heart with dreams and that faith gives you the courage to dare to do great things,” read the lyrics.

The FFRF alleged the song excluded non-evangelical Christians, Jewish, Muslim and non-religious students and their families. They said the song breached the district’s obligation to remain neutral on religion.

“Public schools should not be seeking out songs that exclude students and create a divisive environment,” Seidel wrote. “Bullying is rampant and on social media and Houston County Schools should be striving to find inclusive, secular songs that all can enjoy without compromising their own personal beliefs.”

The FFRF demanded that the district also cease all graduation prayers – noting that such behavior is against the law.

“Even when student-delivered, the Supreme Court has found these prayers unconstitutional,” Seidel wrote.

The school superintendent told the local newspaper that the school district doesn’t have a choice. They must follow the law.

The Macon Telegraph heralded the district’s decision and said it was prudent to follow the law and not incur legal expenses.

“We are a pluralistic society with many faiths and beliefs,” the newspaper wrote in an editorial. “Parents want their children indoctrinated in their family’s faith. That faith is not always Christianity. After all, it’s a parent’s job to teach their children in their religious tradition, not the school’s.”

But not everyone agrees with the decision.

“It’s an attack on the Christian faith,” said Bobby Nix, youth pastor at the First Baptist Church of Perry. “We’re heading towards a Godless society.”

Nix told Fox News that he understands why the school district did what they did – but he said there comes a time when people have to take a stand.

“I hope our kids will stand up – not to be ugly about it – but to stand up for their rights they have in Christ – their constitutional rights,” he told Fox News.

Parent Terri Minter told the Telegraph that she was disappointed in the superintendent.

“I cannot for the life for me understand what in the world would cause him to be afraid to stand firm to his beliefs,” she said. “Just because you have the voice of a few that don’t want it, we should not have to be afraid.”

But the FFRF’s Seidel said it doesn’t matter if just one person objects to the religious-themed song or prayers.

“It makes no difference how many students want prayer or wouldn’t be offended by prayers at their graduation ceremony,” he wrote. “The School District has a duty to remain neutral toward religion.”