Todd Bensman
|
Posted: Apr 28, 2019 12:01 AM
Share   Tweet
The opinions expressed by columnists are their own and do not necessarily represent the views of Townhall.com. 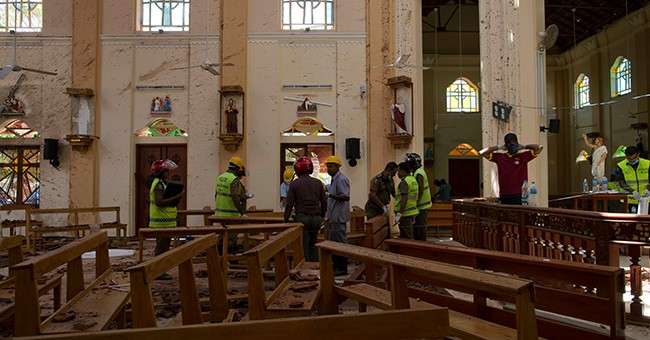 Intelligence failures kill, as we just saw to Sri Lanka. But that lesson somehow goes unlearned time and again. The American homeland security enterprise, beset by turnover and some infighting, should take Sri Lanka as a poke in the ribs to stay on point.

The three elements of intelligence that save lives

To understand intelligence failure, it helps to know what its component parts mean. “Intelligence” is not merely raw information; it’s the end result of a process by which trained analysts evaluate and synthesize some information with all other available information. Analysis, while hardly an exact science since it relies heavily on human judgment, is what adds meaning, relevance, and accuracy to situation reports that go to decision-makers for potential action.

Three key elements have to be present at the same time for intelligence success.

Failure is what happens when one or more of the three elements do not align properly, and people die as they did in Sri Lanka, or in New York City and Washington D.C. on 9/11. Conversely, when accurate strategic and tactical intelligence aligns with receptive leadership in time then plots and attacks get thwarted, and lives are spared.

Take 9/11 as a case in point. The 911 Commission Report describes an American CIA, FBI, and the President in possession of general strategic information prior to the actual attacks that al Qaeda aspired to fly passenger planes into American buildings somewhere, someday. Some tactical information got through that plotters who attended an al Qaeda planning meeting in the Philippines had moved to the United States, while other plotters were learning how to fly but not land passenger jets in Phoenix. But none of that got shared and therefore didn’t get synthesized to create the picture decision-makers needed.

All top American decision-makers had in hand by September 10, 2001, therefore, was strategic intelligence not tactical enough to be seriously believed, or to help leaders even guess at what resources to deploy, where, or when.

Leadership must be open-minded, expert, and focused

In his book Intelligence and Surprise Attack, Naval Postgraduate School professor Erik J. Dahl studied counterterrorism intelligence successes, rather than more usually-studied failures, for learnable lessons. After studying the role of intelligence and leadership decisions in hundreds of thwarted plots, Dahl determined that, by far, most were due to leaderships receptive to tactically precise intelligence warnings. The usefulness of strategic intelligence seems to run a distant third in Dahl’s view.

“Most terror plots are not disrupted when a highly skilled or imaginative analyst detects subtle clues that link otherwise insignificant bits of data. Nor are they often prevented through the use of exotic intelligence methods such as spy satellites and overseas agents,” Dahl writes. “Instead, most are foiled when intelligence and law enforcement agencies obtain very precise information about individual plots being planned by specific groups. This precise warning becomes actionable when it is provided to receptive law enforcement authorities and policymakers, who take action to stop the plots.”

In Sri Lanka, if press reports are to be believed so far, highly accurate strategic and tactical intelligence was provided by Indian and U.S. intelligence services to their Sri Lankan contacts well in advance of the coordinated church suicide bombings that killed at least 250 people. Sri Lankan government officials had early warning that the group’s cleric wanted to bomb Christians and tourists and even knew the names and addresses of suspects as recently as the day before the attack.

What went missing was receptive leadership. Some reports indicate that decision-makers just didn’t want to believe the intelligence because the local group responsible, National Thowheed Jamath, had until then only defaced Buddha statues. The very idea of statue vandals even trying a multi-location suicide bombing campaign seemed absurd, perhaps like flying hijacked airplanes into buildings.  Other reports have blamed a rift between the Prime Minister and the President, where the two decision makers weren’t talking and sharing.

Why should any of this matter to American homeland security leaders in the Donald Trump administration?

Because history shows how deceptively easy it is to slip into old habits, with the passage of time but also when distracting change is afoot.

After 9/11, enormous effort went into legislation and homeland security reorganizations designed to make rock-sure the most accurate possible strategic and tactical intelligence was shared widely among responsible entities, and given to leadership always be open to it.

None of this is meant to imply that the United States’ homeland security apparatus or President Trump have slipped into complacency or are distracted to the point of pre-9/11 reversion and intelligence dysfunction. The opposite is likely true.

Still, after 18 years of operating with the right design and intentions, those in charge of U.S. security should stop for a few minutes and think of Sri Lanka as a cue, a reminder, and a lesson to stay on mission.