Tim Wildmon
|
Posted: Aug 21, 2018 12:01 AM
Share   Tweet
The opinions expressed by columnists are their own and do not necessarily represent the views of Townhall.com. 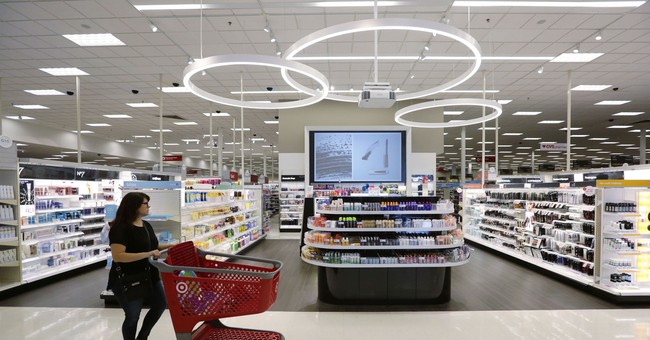 As the nation prepares for the back-to-school season, Target still hasn’t learned its lesson.

Earlier this summer, a voyeur was caught taking pictures of two sisters in a Detroit-area Target changing room. This frightening incident is not the first to happen at Target because of its dangerous and misguided restroom and fitting room policy—and it won’t be the last.

What was Target thinking when it proudly announced to the world in April 2016 that it allows men to use women’s restrooms and changing areas in its stores? Certainly not that voyeurs and predators are looking for places where they can victimize women and children, otherwise, the retailer would have never made such a perilous business decision.

Just days after that announcement, the American Family Association initiated #BoycottTarget, a movement that has brought together American families who have said “enough is enough.” More than 1.5 million people have signed the boycott pledge, vowing not to shop at Target until the company reverses its politically correct but potentially dangerous policy. These families—and AFA’s boycott—have had a significant effect on both Target’s foot traffic and sales.

As millions are doing their back-to-school shopping, AFA continues to remind families that shopping at Target just isn’t worth the risk. Even though Target continues to be unapologetic, the #BoycottTarget efforts are having impact. But beyond the financial implications for the company, this is an important cultural issue, and Target chose to make itself the example by issuing a proactive statement on its not only controversial but alienating policy.

AFA has made it clear since the boycott began that our worries do not stem from fear of the transgender community, but rather from the very real threat that predators and voyeurs, or anyone with evil intentions, would take advantage of the Target bathroom policy to harm women and children. And they have.

Besides the incident near Detroit this summer, there are other frightening examples of predators taking advantage of Target’s policy. You can find some of those examples on our #BoycottTarget webpage at www.afa.net/Target.

Despite the dangers, Target has not budged on its policy, other than to state that family restrooms would be installed in stores not already equipped with them. That’s not enough. Women’s restrooms and fitting rooms still have an open door to potential predators, putting mothers, daughters, wives and children at risk.

This boycott will not end until all are safe in Target restrooms and changing areas. With enough pressure, I truly believe America’s families can stop this insanity before more women and children become victims and are scarred with experiences they can never forget.

Here’s the bottom line: Target is still presenting risk and danger to women and children. But since the start of the #BoycottTarget initiative, concerned families and shoppers are making an unprecedented impact on a corporation whose policy is to allow men to use women’s restrooms and dressing rooms.

Target’s actions are unacceptable for families, and this policy continues to put women and children in harm’s way. We must keep the pressure on Target by avoiding stores during back-to-school shopping and educate Target to the fact that its bathroom policy earns a failing grade.