Tim Wildmon
|
Posted: May 10, 2017 3:49 PM
Share   Tweet
The opinions expressed by columnists are their own and do not necessarily represent the views of Townhall.com. 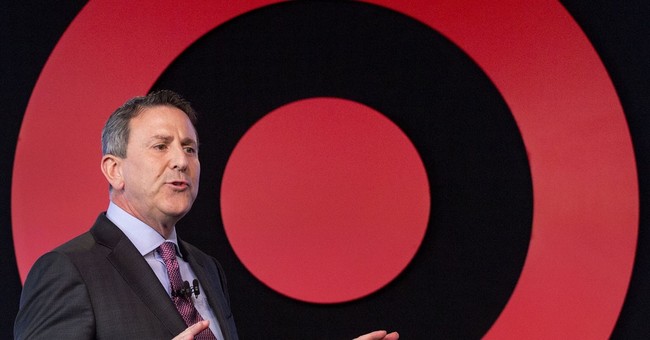 Last July, an 18-year-old woman was getting ready for summer, trying on swimsuits in a fitting room at a Target store in Ammon, Idaho. A man slipped into the stall next to her and secretly filmed her while she was changing.

This man was arrested, pled guilty and was sentenced to between two and five years for felony video voyeurism. Police said his cell phone revealed it wasn’t the first time he’d done this. And the woman said the incident traumatized her and she suffered “emotional mutilation.”

Unfortunately, this is not the first incident where someone with evil intentions took advantage of the misguided and ill-informed bathroom and fitting room policy at Target.

And it won’t be the last.

So what was Target thinking when it proudly announced to the world a year ago that it allows men to use women’s restrooms and changing areas in its stores? Certainly not that voyeurs and predators are looking for places where they can victimize women and children, otherwise, the retailer would have never made such a perilous business decision, and the past year might have been very different for Target.

Last April, the American Family Association initiated #BoycottTarget, a movement that has brought together American families who have said “enough is enough.” More than 1.5 million people have signed the boycott pledge, vowing not to shop at Target until the company reverses its politically correct but potentially dangerous policy. These families—and AFA’s boycott—have had a significant effect on both Target’s foot traffic and sales. Take a look at these numbers: Target stock on April 19, 2016—the day Target made its announcement about the bathroom policy—was at 84. Now, a year later, stock prices hover around 58.

It’s significant to note that the American Family Association #BoycottTarget initiative began just one day after this misguided announcement, which Target CEO Brian Cornell claims he knew nothing about. Earlier this month, Cornell’s already-generous cash-and-stock compensation was cut significantly after a “bleak year,” reported U.S. News & World Report, falling by one-third to $11.3 million. Additionally, Fox News reports that all but one of Cornell’s original 10-member executive team have left the company.

I have made my travel plans from AFA headquarters in Tupelo, Miss., to Target headquarters in Minneapolis, where I will deliver 500,000 #BoycottTarget pledge signatures to Target executives. Last spring, AFA delivered the first million signatures and had hoped to have a productive conversation with decision-makers at Target about these families’ reasons for no longer shopping at Target stores. We were politely and passively heard for a few short minutes, but no real changes were made.

The boycott will not stop just because we have reached the one-year mark and the 1.5 million-signature threshold. This is an important cultural issue, and Target chose to make itself the example by issuing a proactive statement on its not only controversial but alienating policy.

You see, the American Family Association has heard from insiders that other companies have hesitated to change their bathroom and changing room policies because of the success of the boycott—and the demise of Target.

Even though Target continues to be unapologetic, the #BoycottTarget efforts are having an impact. The retailer reported weaker-than-expected same-store holiday sales, and foot traffic in stores has decreased. A recent Wall Street Journal article also told of the internal turmoil at Target after the policy announcement and the boycott that followed.

AFA has made it clear since the boycott began that our worries do not stem from fear of the transgender community, but rather from the very real threat that predators and voyeurs, or anyone with evil intentions, would take advantage of the Target bathroom policy to harm women and children. And they have.

Besides the incident in Idaho last summer, there are other frightening examples of predators taking advantage of Target’s policy. You can find some of those examples on our #BoycottTarget webpage at www.afa.net/Target.

Despite the dangers, Target has not budged on its policy, other than to state that family restrooms would be installed in stores not already equipped with them. That’s not enough. Women’s restrooms and fitting rooms still have an open door to potential predators, putting mothers, daughters, wives and children at risk.

Now, one year after the American Family Association #BoycottTarget initiative began, I believe that with enough pressure, we can stop this insanity before more women and children become victims and are scarred with experiences they can never forget.

All this reminds me of these famous words: “The only thing necessary for the triumph of evil is for good men to do nothing.”

Going forward, the American Family Association will do all we can so children and grandchildren can say that evil did not triumph because we did something.