What Mobilizes Catholic Voters in 2020

Tim Huelskamp, Ph.D.
|
Posted: Jun 09, 2020 12:01 AM
Share   Tweet
The opinions expressed by columnists are their own and do not necessarily represent the views of Townhall.com. 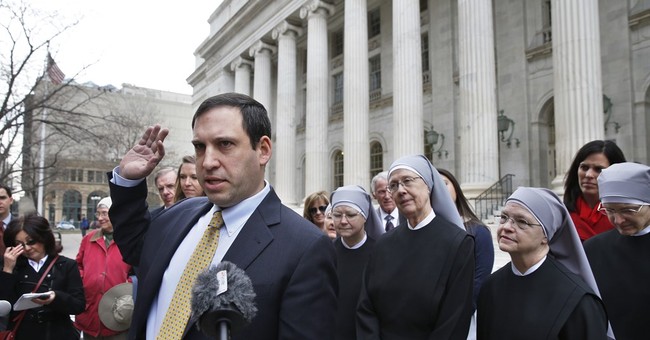 In a tightly contested race, Catholic voters who bring their faith into the voting booth could tip the balance between President Trump and Joe Biden. Republicans can appeal to these voters with a 2020 party platform that highlights key issues Catholics deeply care about: defending religious liberty, respect for the rule of law, protecting the sanctity of life, and fighting for American workers.

Religious freedom is also important to Catholic parents who want to lead their child’s education. Secretary of Education Betsy DeVos has spent the last four years expanding school choice and ensuring parents aren’t excluded from scholarship funds because they want their children to attend religious schools. Catholic leaders, such as Cardinals Dolan and Maloney and Archbishop Gomez, have recognized these efforts, especially most recently as the Trump administration successfully fought to include Catholic schools and parishes in the Paycheck Protection Program. Republicans should continue pressing for school choice and demanding that religious schools aren't discriminated against by a government that can be, as we saw with the Obama-Biden administration, hostile to faith institutions.

The Obama-Biden administration persecution of the Little Sisters of the Poor also demonstrates the need for judges who respect the Constitution and don't legislate from the bench. In 2016, Republicans promised, "Only a Republican president will appoint judges who respect the rule of law expressed within the Constitution and Declaration of Independence, including the inalienable right to life and the laws of nature and nature's God, as did the late Justice Antonin Scalia." President Trump has kept this promise by nominating Justices Neil Gorsuch and Brett Kavanaugh to the Supreme Court, and nearly 200 more to the lower courts. President Trump has made incredible progress in his first term, but more needs to be done to ensure that our country’s judges respect the rule of law and the Constitution.

Republicans must explicitly reject pro-abortion extremism as well. Every life is a precious gift with vast potential, and Catholics will support politicians who respect and honor life from conception to natural death. Articulating a comprehensive pro-life vision will go a long way toward swaying Catholics to vote for President Trump and other pro-life politicians. In recent years, Joe Biden and the pro-abortion lobby have moved to eliminate the popular Hyde Amendment, even though most Americans agree that people who oppose abortion shouldn't be forced to pay for it. And most explicitly the platform should highlight and reject the extreme, radical post-birth abortion provisions articulated by Democrat governors in Virginia and New York.

While in office, President Trump has advanced the pro-life agenda like no other President in American history. The Republican Party should applaud and celebrate this fact, in clear contrast to the radical pro-abortion record of Joe Biden and his party, thereby providing faithful Catholics a clear choice this fall.

Lastly, despite the economic devastation of the coronavirus pandemic, President Trump has done what no other Republican candidate or president could do since Reagan – he has earned the trust of the American worker. Whether in his trade policy standing up to the Chinese communists, his worker-first tax policy that promotes domestic manufacturing, and his rewrites of NAFTA and other trade agreements, Trump has demonstrated his solidarity with blue-collar workers across the nation, many of them Catholic. Far too often Republicans have been unable or unwilling to speak to hopes and desires of hard-working lower- and middle-income families and abandoned the battlefield to the empty promises of the Democrats. But following the word and deed of President Trump, the 2020 Republican platform must reflect his care, love, and solidarity with the millions of hard-working Americans, the core swing voters in so many key states.

Catholic voters who take their faith into the voting booth don't move in lockstep, but they share values like protecting religious liberty, respect for the rule of law, protecting the sanctity of human life, and standing up for American workers. These issues will turn on and turn out Catholic voters in November.